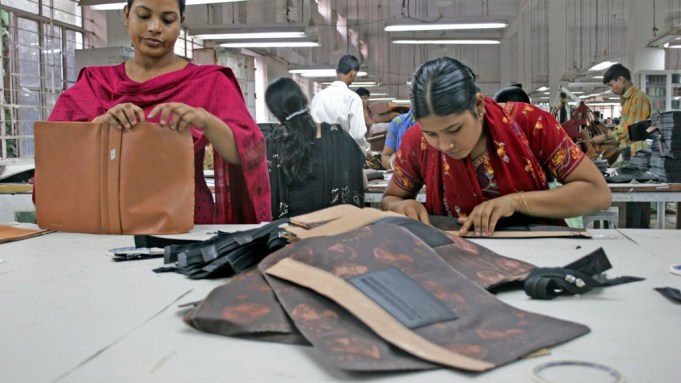 As the 72-hour blockade imposed by the opposition party lifts briefly in Dhaka, 26-year-old Mina walks briskly to her factory in Tejgaon, in the central part of the Bangladeshi capital. There is an element of fear and uncertainty, and police are posted around the street, alert after days of violent protests that have included arson, attacks and deaths.

Mina, who is a senior machine operator in a garment factory, moved to the city to work in the industry when she was 17. For many years, she has faced long working hours. “I feel sometimes that the production pressure may be impossible to endure,” says Mina, “because some days we work 12 hours, or 15 hours or more to meet it. But we are even more afraid that the factories may close down and we will be out of a job.”

She is one of the 3.8 million garment workers in Bangladesh, more than 85 percent of whom are women.

Mina is the face of what has become an industry black eye, and what has made the Bangladeshi worker WWD’s Newsmaker of the Year. While conditions had been poor and accidents had been occurring for some time, the situation crystallized on April 24. Already reeling from a factory fire six months earlier that saw 112 workers perish, the global apparel industry was rocked when 1,132 workers died in the building collapse at Rana Plaza in Savar, a suburb of Dhaka. Efforts to find survivors went on for weeks, and it is estimated that it will cost more than $70 million to compensate victims’ families and survivors.

The tragedy stirred a global outcry and raised a fundamental question: What is the human price of cheap fashion?

The controversy continues to divide the industry, with 115 mainly European firms agreeing to follow one set of legally enforceable working standards drawn up by unions and major U.S. retailers like Wal-Mart Stores Inc. and Gap Inc. following another. Western governments, meanwhile, are pressuring Bangladesh to improve industry conditions.

Estimates of the number of garment factories in the country vary between 3,500 and 4,500 and as Bangladesh has rapidly grown to be the second-largest exporter of apparel in the world, many of them have grown as well. But the nation’s regulations and laws governing working conditions, safety, the right to form unions and minimum wages have not kept up that pace, and complaints about sweatshops, with workers in cramped conditions and working long hours, are rife.

But in the last few months, change has been sweeping through the industry, spurred by the global attention. Workers say that they are beginning to notice a difference on the factory floor, even if it’s only a more conciliatory tone from their employers.

Also, for the first time, workers and employers are being drawn together as politicians clash in advance of the Bangladesh election scheduled for Jan. 5. Violence has increased and 72-hour blockades of major cities have become commonplace. Reports of arson, deaths and violent attacks have become part of daily life. Owners of garment factories said meeting production schedules has become their biggest challenge, including getting completed orders to the port city of Chittagong. They’re losing millions of dollars from having to send orders by air freight.

“The country is facing a volatile situation because of a lack of understanding between politicians. We want peace to do business,” said Kazi Akram Uddin Ahmed, president of the Federation of Bangladesh Chambers of Commerce and Industry.

“We were just beginning to hope that our lives would be better,” said Mohd Islam Hussein, a worker who said he has begun to awaken to his rights and those of his colleagues. “But now, we are not sure whether our factories will survive another year.”

Amid it all, workers admit there has been progress in their working conditions in the last six months. These include a recent agreement for a minimum wage increase to 5,300 taka, or $68, a month, a rise of 77 percent from the existing $38 a month. The monthly minimum wage for entry-level workers in other major garment-exporting countries is much higher, such as India ($71), Sri Lanka ($73), Pakistan ($79), Vietnam ($78) and Cambodia ($80). Until last month, Bangladesh, at $38, was close to half of those amounts.

“We are really happy with this wage increase but also are still expecting more to meet the situation of inflation,” said Ogusa Begum, who works at a factory in northern Dhaka.

Recent studies, including one by the Center for Policy Dialogue in Dhaka, have suggested that $68 is a minimum living wage. However, many of the workers support more than half a dozen people, often including their parents and siblings. Employers, on the other hand, say higher wages would put them out of business and they are under too much financial pressure already.

There have been other small changes, such as in sanitation, the addition of water coolers, meal timings and agreed-upon maternity leave. One of the major stumbling blocks is the fact that a majority of the owners of garment factories are men, as are most of the supervisors on the factory floors. “But we have learned not to be intimidated by that,” Begum said, “especially when we can speak with each other and take a stand on what we believe is right.”

She, and other workers at her factory, are no longer afraid to express themselves or to form a union. “I feel very strong now. The workers have more unity and this makes me feel very confident,” she said.

But on top of fears about potential further tragedies, workers say they have other worries.

“It’s been a year of many fears for me,” Begum said as she discussed her work as a factory supervisor in a company that manufactures shirts. “But now they are very different from six months ago.

“I have seen many things since I moved to Dhaka from my home from southern Bangladesh. I have changed jobs from a knitwear factory, learned how to get better at my job, but this year our workers and our industry has really suffered,” she said, alluding to the numerous fires that have killed industry workers — an estimated 400 people in fires that were unreported, according to unofficial reports, and about 128 officially in the last year. The largest was the fire in November 2012 at Tazreen Fashions Ltd., which claimed 113 lives, with reports that the management locked the gates and did not let workers leave the premises when the first fire alert was sent out.

Begum said her concerns about building safety have been replaced by fears of countrywide anarchy given the political turmoil, which could require her to move back to her village, and to a life that was inured in poverty. “We are all scared that if the shipments cannot leave the factory, the factory owners will stop production and we will be out of a job,” she said.

Many of the garment workers at an evening meeting said that they dream of better lives for their children, and that their salaries are key to a better education for them. Bangladeshi banker and economist Muhammad Yunus observed that the growth of the garment industry has changed the lives of many workers. “The transformation process that Bangladesh is going through of empowering women who come from villages. These women move from a life of poverty to work in factories, live independently in cities away from their families and find change from rural norms. They earn their own money and gather economic strength. All of these factors have a profound impact on society and cause a slow and steady change,” he told WWD in an earlier interview.

Even as there are signs of change, workers admit there still is often an agreeable nod by employers on the surface but persecution when it comes down to brass tacks. “We were told it is OK to go ahead and form a union, but then we came to work and found a notice on the door saying that the factory would be closed for the next two days. It was a complete breakdown for our workers who need their daily wages,” said Abdul Rahman, a local leader on the factory floor in a large garment factory in Ashulia, a suburb of Dhaka.

As Farah Kabir, country director of Action Aid Bangladesh, said, “It’s a very mixed bag. As you follow the story there has been a lot of tension. It’s about how workers are being rehabilitated, about compensations to workers who have suffered and to their families; it’s about ad hoc responses from the government, tokenism and also real progress. There has also been individual and collective support for the workers from all over the world. Yet, there still remains a lot to be done.”

“These garment workers are working for millions of consumers and hundreds of global employers. We are all affected and we all need change,” B. Srinivasa Reddy, director of the International Labor Organization Country Office for Bangladesh, noted in November.

Kalpona Akter, executive director of the Bangladesh Center for Worker Solidarity, said garment workers in Bangladesh today still live in fear that another fire might rip through a factory or another building might collapse and kill them, despite efforts on multiple fronts to improve safety and working conditions. But workers are also aware of the international focus and effort to make their factories safer, which has given them some hope and raised the level of awareness, she added.

Akter, also a former garment worker who was blacklisted for trying to organize workers at a factory before she helped form the Center, said, “I think workers from Tazreen and Rana Plaza are suffering from post-traumatic stress syndrome….Their mind-set is that there can still be an accident at any time.”

As for the minimum wage increase, Akter said labor groups were seeking $100 a month.

Akter said less than 200 factories are registered to be unionized and less than 20 of those have collective bargaining agreements.

Akter said workers no longer feel as alone in the world.

“One of the improvements is that there is a [newfound] level of self-awareness,” she said. “Whenever these days they see a crack in a building or a spark [in a factory] they leave and say they will not come back until it is fixed,” crediting unions for talking to workers about their right to refuse dangerous work.

Despite what she sees as the multitude of shortcomings on the path to reform, Akter did not dismiss the significance of the moment for Bangladeshi workers.

“I think this is an historic turning point,” Akter said. “We are trying our best to use this opportunity, and the accord is one big piece of it. I believe worker justice starts with worker safety. They definitely have a brighter future, but it will be not be easy to get that — and we have a long way to go.”