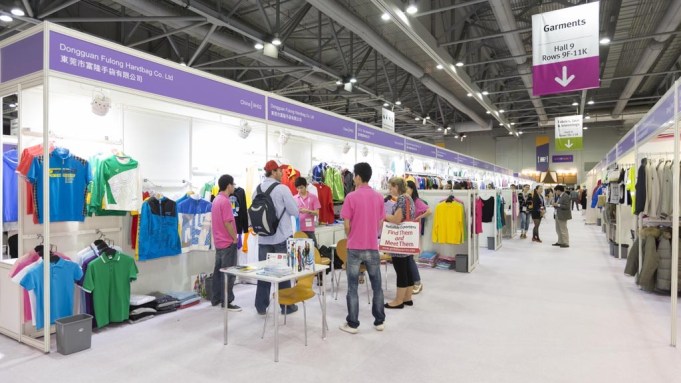 Several exhibitors at the show, which ended its four-day run on April 30, packed up their booths early from the lack of traffic.

“European customers are buying less,” said Catherine Wang, a sales representative from Hangzhou Shengcai Textile Co. Ltd. “We have some Middle Eastern buyers, but we would like to do business with more.”

To broaden its customer base, the company also plans to attend the Global Sources fair in Brazil next year.

Indian manufacturers echoed similar sentiments. Jagdish Suneja, a representative of Apoorva Exports, said, “The reason people are shifting to Latin America is because consumption in Europe is decreasing.”

According to a recent survey by show producer Global Sources, the number of buyers from emerging markets — including Central and South America, the Middle East, Eastern Europe and Africa — who attended their fairs during 2010-11 was as high as 120,474.

“Of course, interest [in South America] is increasing,” said Khurram Shahzad, a beachwear wholesale supplier from the Dominican Republic. “It’s not a new market, but it’s a growing one.”

Shahzad, like several others at the fair, were drawn to vivid colors on display. This year, exhibitors showed bright oranges, pinks and blues, as well as neon hues in their spring-summer apparel and accessories, while fall-winter selections featured plum and chocolate shades.

Jewel tones such as turquoise, emerald and ruby were also prevalent, as well as handcrafted ethnic jewelry. In the case of scarves, there was a resurgence of animal prints and several exhibitors received inquires for accessories with studs.

This year, the majority of exhibitors came from China, Hong Kong, Taiwan, India, South Korea and the Philippines. While the number of booths was up at 1,200 — a 9 percent increase from last year — attendance dropped 3.7 percent to 10,017 compared to the October edition.

Manufacturers said that although orders are still coming in from Europe, customers are reluctant to buy in bulk.

“They are afraid to have stock,” said Michael Levy, a sales representative from Hong Kong-based ADM Trading Ltd. “They are ordering one or two colors, whereas before they would ask for five.”

Andrea Amadei, sales and marketing manager of Dragon Group Ltd., said order sizes from Europe have fallen by as much as 20 percent. The Shanghai-based company manufactures accessories with a focus on gloves for clients including Diesel, Max Mara, Armani and Lacoste.

Many exhibitors felt that accessories had taken the hardest hit with the crisis.

She added that, despite plummeting sales for belts and accessories, orders for scarves in Western Europe have remained steady.

Others noticed that demand for jewelry was falling in Europe. “People are selling less so we want to order less,” said Steven Wilce, director of Gemjar Ltd., a U.K.-based accessories firm.

Meanwhile, sportswear and outerwear manufacturers were more concerned by domestic issues, such as China’s ongoing battle with increased labor costs. Exhibitors said that costs have risen by as much as 15 to 20 percent in the last year.

“The labor costs are the reason why people are panicking,” said Natalia Khamudisova, project manager with Vetranet, an outerwear manufacturer in Beijing. “A lot of companies think production costs are too high in China and they are trying to relocate.”

To remain competitive, her factories are relying on China’s reputation for quality.

“We set ourselves apart using quality and expertise for the fabrics and trims and testing all the products before going into production,” Khamudisova added.

Appreciation of the yuan and cost of materials were another concern.

“We are more affected by the high cotton prices, the rise last year and the exchange rate,” said Göran Larsén, a sourcing manager at Stadium HK Ltd., a sportswear company headquartered in Sweden.

He observed that larger companies such as Adidas, Nike, Puma, H&M and Uniqlo are manufacturing basic items outside of China.

“It’s not only because of the price but because of social compliance and higher efficiency,” Larsén said.

Global Sources said despite struggles with increased production costs and reduced customer spending, they expect China’s exporting power to remain strong. According to their recent survey with 413 respondents, 85 percent of buyers said they plan to keep their sourcing volume from China the same if not higher in 2012.