Bangladesh Stricken by Another Factory Tragedy

By Mayu Saini and Kristi Ellis and John Zarocostas and Arthur Friedman on April 25, 2013
View Slideshow 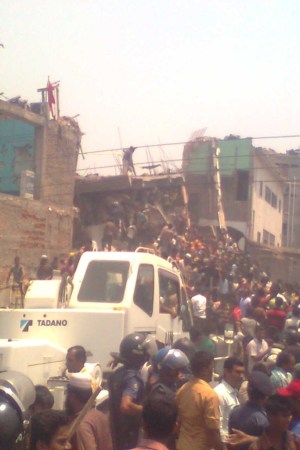 Another apparel factory disaster in Bangladesh has stirred an outcry over safety codes and working conditions after more than 100 people are feared dead as Rana Plaza, an eight-story building in the town of Savar, a suburb of the Bangladesh capital Dhaka, collapsed at around 9 a.m. Wednesday.

The disaster was met by a new round of demands for reform of Bangladesh safety codes and working conditions, and renewed calls for examination of the failures of factory inspection programs in the region.

The building housed several garment factories where more than 2,500 people worked, according to officials from the Bangladesh Garment Manufacturers and Exporters Association. The number of people still buried in the debris was unclear at the end of the day, a police official told WWD. He said the building collapsed so quickly there had been little time for people to reach safety. The fire department and other official agencies have been working to find and rescue survivors from the building, which eyewitnesses have described as a “mess of cement and stone, all piled untidily together.”

The Institute for Global Labour and Human Rights said at least 105 garment workers were confirmed dead, and the death toll is expected to rise. An estimated 1,000 workers have been injured, the organization said, and 600 had been rescued.

“Bangladesh is tragically known for its lack of proper building codes combined with out-of-control graft,” said Charles Kernaghan, director of the institute. “It is the workers who pay the ultimate price. What took place was really an act of negligent homicide by the building’s owner and management of the four factories.”

An official from BGMEA, who requested anonymity, told WWD that although the government had stepped up efforts on compliance issues at garment factories across the country, it was still a work in progress. “The efforts will simply have to change and intensify after this tragedy,” he said.

The Bangladesh Center for Worker Solidarity said the factories were making items for clothing retailers Mango of Spain and Benetton of Italy.

The Clean Clothes Campaign called for immediate action from international brands following the tragedy. The CCC said activists entered the ruins of Rana Plaza and found labels linking major European retailers to the factory, also citing Mango, as well as the U.K.’s Primark. Rana Plaza also produced for well-known European and U.S. brands, including C&A, KIK and Wal-Mart, the CCC said. These brands were involved in the fire at the Tazreen Fashions factory, not far from Savar, where 112 workers died in a fire five months ago. German discounter KIK was also involved in the Ali Enterprises fire in Pakistan, where nearly 300 workers perished last September.

The killed and injured workers at Rana Plaza were producing garments when their factory, allegedly with illegally built floors, suddenly gave way with a loud sound, leaving only the ground floor intact. This latest collapse provides yet further evidence that voluntary company-led monitoring has failed to protect workers’ lives, the CCC said, adding that unnecessary deaths will continue until brands and government officials agree to an independent and binding fire and building safety program.

“It’s unbelievable that brands still refuse to sign a binding agreement with unions and labor groups to stop these unsafe working conditions from existing. Tragedy after tragedy shows that corporate-controlled monitoring is completely inadequate,” said Tessel Pauli, a CCC staffer. “Right now the families of the victims are grieving and the community is in shock. But they, and the hundreds injured in the collapse, are without income and without support. Immediate relief and long-term compensation must be provided by the brands who were sourcing from these factories, and responsibility taken for their lack of action to prevent this happening.”

The CCC called on brands to sign on to the Bangladesh Fire and Building Safety Agreement immediately. The CCC, together with local and global unions and labor rights organizations, has developed a sector-wide program for action that includes independent building inspections, worker-rights training, public disclosure and a review of safety standards. The agreement has already been signed by PVH Corp. and German retailer Tchibo and needs two more companies to agree for it to be activated. The labor signatories are now calling on all major brands sourcing in the industry to sign on to the initiative in order to ensure its rapid implementation.

Sharan Burrow, general secretary of the International Trade Union Confederation, a global umbrella group that includes the AFL-CIO, said, “The big companies are avoiding their responsibility to actually respect safety standards that are global standards. Mind you, the government has been negligent in this regard. We must meet safety standards. Safe jobs save lives.”

Burrow, who represents 175 million union members in 155 countries, said, “The time for discussion about this is over. Corporations have to respect genuine safety standards and indeed the government must take responsibility for its constituents’ needs.”

Valdés, who recently visited Bangladesh on a mission, said the country has good building codes, planners and architects, but noted, “The problem is the enforcement and the implementation of the designs and possibility of checking the standards.”

She said often a two-story structure becomes a five- or an eight-story building without having the proper readjustments done to the structure and the foundations.

“These are normally illegal, but in many occasions, the authorities are looking the other way or taking some kind of bribes,” Valdés claimed.

RELATED STORY: Bangladesh Worker and Activist Press Cause in Washington >>

The UN official stressed companies such as international garment brands also have an “ethical and social responsibility” to ensure facilities they are using meet safety and building norms.

“They are outsourcing a good that normally in their home countries has a very strong legal requirements in terms of safety,” she said. “So for them to sell something because it’s cheaper from a country where those requirements might be less firm is an irresponsible act.”

Kevin Burke, president and chief executive officer of the American Apparel & Footwear Association, said, “Worker safety is a top priority for the U.S. apparel and footwear industry because we believe that all workers in the global apparel and footwear industry should be treated with fairness and respect. Creating a safe work environment is essential to this effort. AAFA continues to be in touch with our members as we begin the long process of learning all of the facts surrounding this tragedy.”

In Bangladesh, Mohammed Aslam, owner of a smaller garment factory in the Dhaka area, said the shock waves of the incident were being felt across the city and that many of the owners feared further reprisals from their global buyers.

The past six months have been particularly rough for the garment industry in Bangladesh, which is the second-largest exporter of ready-made garments in the world. The $20 billion textile industry is also one of the largest employers in the country. But morale has been severely tested after the fire at Tazreen Fashions in November.

The situation on Wednesday was reminiscent of the Tazreen disaster, particularly as local news reports have quoted a garment worker from the fifth floor of Rana Plaza as saying that cracks in the building were noticed the previous day by some workers but that factory managers urged them to ignore the cracks and return to work. At the Tazreen fire too, workers said that managers blocked the exit doors while telling workers that the problem was simply smoke and they should return to work.

The Tazreen fire was quickly followed by others, in particular one at Smart Fashions, Dhaka, in January that claimed seven lives, drawing attention to the safety requirements of factories as well as the poor working conditions for the workers.

The government has been making an effort to react to the situation. Raziuddin Ahmed Razu, labor minister, assured garment industry leaders that compliance was on the rise.

“We have begun inspection of all the garments factories to ensure compliance for the workers,” he said. “We want to ensure a better working environment. If any of the garment factories are found noncompliant, it will be closed.”

The government has announced a day of mourning on Thursday, and the national flag will fly at half-mast in solidarity with the dead and the injured.