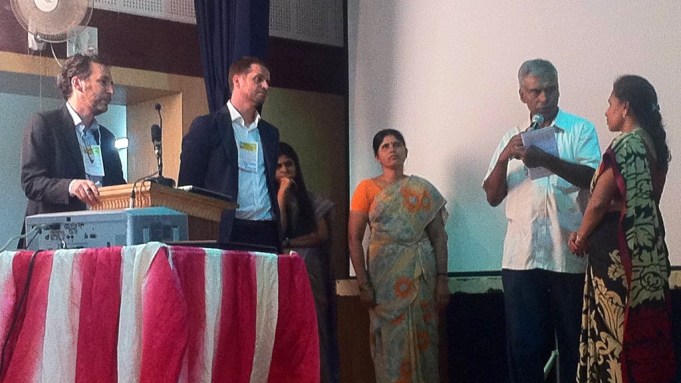 The Bangladesh authorities on Tuesday claimed the fire at the Tazreen Fashions factory in Ashulia that killed more than 100 people was an act of arson.

“We have come to the conclusion that it was an act of sabotage. We are finding out as of now who exactly the saboteurs are and all culprits will be brought to book,” Mohiuddin Khan Alamgir, the interior minister, said.

Protests continued for a second day even as Bangladesh marked a national day of mourning for victims of the fire, and garment factories throughout the country were closed. More than 1,000 workers in the Ashulia industrial belt on the outskirts of the capital where the factory is located expressed mourning and anger against owners of the factory, whom they feel should be regarded as responsible for the incident.

Wal-Mart Stores Inc. said Monday that one of its suppliers subcontracted work to Tazreen Fashions. “A supplier subcontracted work to this factory without authorization and in direct violation of our policies. Today, we have terminated the relationship with that supplier. The fact that this occurred is extremely troubling to us, and we will continue to work across the apparel industry to improve fire safety education and training in Bangladesh,” the world’s largest retailer said.

Sourcing giant Li & Fung and German mass-market retailer C&A have both said they had orders pending with the factory when the blaze occurred Saturday night. Li & Fung said it will compensate the fire victims’ families and set up an education fund for the victims’ children.

Even as the international outcry grows over the tragic factory fire in Bangladesh, a panel in Bangalore, India, revealed further worker abuses in the region’s textile and apparel industry. The panel demanded more credibility on the part of employers in a situation of “grave and systematic violations of individual and collective human rights” in India’s $55 billion textile industry.

The National People’s Tribunal on the Right to a Living Wage, held from Nov. 22 to 25, was filled with moving testimony from workers about poor working conditions, along with statistics and perspectives from union leaders and nongovernmental organizations. The event was organized in collaboration with the Asian Floor Wage and was the third tribunal of its kind, with the first held in Sri Lanka in 2011, and the second in Cambodia in February.

The importance of the right approach is relevant; India is the third-largest global exporter of textiles, just behind China and the 27-nation bloc of the European Union, and is the sixth-largest apparel exporter after China, the European Union, Hong Kong, Bangladesh and Turkey, according to the World Trade Organization.

Bangalore, which is in southern India, is itself a base for more than 1,000 large, medium and small apparel companies, which employ an estimated 500,000 workers.

The audience was comprised of a large number of women, who make up 80 percent of the workforce in the Indian textile industry.

Although there were many strong and passionate speakers from among the workers and trade unions, only one global brand took the stand — H&M, which has more than 2,700 stores worldwide. The Swedish fast-fashion retailer established an office in Bangalore in 2011 and has 128 employees in India and 55 suppliers.

Tobias Fisher, relations sustainability manager for H&M, told the tribunal: “The Indian production office conducted approximately 250 audits during 2012, of which 75 percent of the audits were unannounced.”

He said a multistakeholder collaboration was essential for the way forward. As workers came up on stage to present their grievances directly about the factories they had worked in, the panelists, the workers and the brand representatives shared a moment of gravity.

“We are setting up social dialogues in Bangladesh and working with the Swedish trade union in Cambodia. These are learnings we need to take further in other markets,” said Fisher. “We need to build up a dialogue and we need to build trust. There have to be proper grievance channels. We have started, but we have a long way to go.”

Adidas sent a statement noting that the company shared a common desire along with the NGOs and trade unions present at the meeting to see that workers secure just and favorable wages. “We seek to support wage payments through our regular social audits,” the company said.

Members of the panel suggested that making consumers more aware of fair practices would help sustain higher prices, which could help pay higher wages. Other suggestions included paying the workers more and for the company to take a cut in profits.

Anannya Bhattacharjee, international coordinator at the Asia Floor Wage Alliance, observed that sourcing from India was expanding and that it was only fair that the brands should pay more. “Despite the economic importance of the industry, garment workers earn less than half of what is needed to support their families. Living wages and decent working conditions are human rights but they are denied to garment workers,” she said.

The disparity in workers’ pay in different areas of the country was another issue. According to the Apparel Export Promotion Council, the textile and clothing manufacturing hubs of the National Capital Region (which includes New Delhi, Gurgaon and Noida), Tirupur (in the state of Tamil Nadu, in southern India) and Bangalore alone contributed 55 to 60 percent of total exports.

“One of the problems is that the rates for workers are different in each city. For example, in Bangalore, workers get 172 rupees [$3.09 at current exchange] per day, while in Delhi they get 275 rupees [$4.95] per day. The question we are asking the labor department is ‘Why the variation?’” asked Pratibha R. Gatwu, vice president of the Garment and Textile Workers Union.

There are other changes the government needs to make. According to the panel’s findings, it had been provided “sufficient evidence to confirm the ‘effective undermining of the freedom of association of workers, discriminatory practices against socially excluded groups based on caste and gender, which are deepening levels of exploitation, sexual harassment and violence against women and a combination of long working hours and low wages.’”

“I would say the government has positively taken steps to harm the textile sector in terms of raw materials, like their policy on cotton itself,” said Patnaik.

However, the role of global brands continued to come up as the most important factor in changing the situation.

Jeroen Merk of the International Clean Clothes Campaign observed that a lot of reports came out in the Nineties about global sourcing, so a certain code of conduct was adopted. “Yet we need to think about the fact the root cause behind poor working conditions lies at the hand of the global supply chain,” he said.

Although the arguments and union organizations could simply push global brands to invest in other countries, Ashim Roy, general secretary of the National Trade Union Initiative, said that the idea was not to scare global companies from India — which continued to be one of the best options for labor with its strong demographics and reasonable wage levels, but also had key strengths in terms of raw materials, design factors and low political risk. “Textiles is a very labor intensive industry and India is still a good option. All we’re aiming for is fair wages and decent working conditions,” he said.

Tognoni, who was chairman of the panel, said that the passionate testimonies presented by the workers had brought up a range of violations and that the idea was “not to judge and condemn, but to put together a solution and increase transparency. He said that certain things had certainly changed with the industry joining hands to work together, such as child labor.”

He said that serious issues facing workers in the textile industry include: inadequate implementation of labor laws, low wages, inhuman productivity targets, a rampant use of illegal contract labor systems, the need for a living wage, the freedom to associate within factories and the impacts on unionization and an understanding of corporate social responsibility and its failure to impact workers.

“We want to place accountability at every level,” Tognoni said.