These last 24 months in Dhaka have been a prime example of the gamut that emotions can run. From horror — as the eight-story Rana Plaza collapsed on April 24, 2013, killing 1,135 garment workers — to helplessness, to suffering, to collective action, to planning, to correction and everything in between. 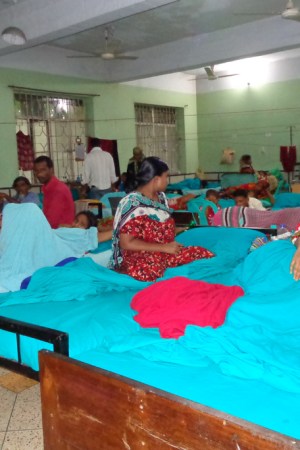 These last 24 months in Dhaka have been a prime example of the gamut that emotions can run.

From horror — as the eight-story Rana Plaza collapsed on April 24, 2013, killing 1,135 garment workers — to helplessness, to suffering, to collective action, to planning, to correction and everything in between.

And in many of these varying emotions, the garment industry in Bangladesh found resonance across the world.

The resonance is particularly strong this week, as tears are welling up in memory, and prayers sung, just short of the second anniversary of Rana Plaza on Friday.

It is also a week of intense introspection; talking about compensation payments that have not been completed, rehabilitation gone awry, discussions in which change and the vision for growth in the next three years have come into sharper focus.

Garment workers, who spent months demanding justice — and the arrests of the owners of the five factories housed in Rana Plaza as well as its owner, Sohel Rana — have paid special attention to the judicial system in Dhaka this week, which is grinding on.

Last week, the investigating officer for the Rana Plaza case asked the court for more time before filing the charge sheet against the 21 people already arrested. Eight of them are out on bail. The court granted five more weeks to file a charge sheet, by May 21.

But for the more than 2,000 survivors and the families of the dead, the two-year mark on April 24 is a sign of too much time being granted already.

Ruksana Begum, whose sister died in the collapse of the building, said that nothing — not the pending completion of the compensation granted for the injured and families of the dead, nor the justice in indicting the owners of the building — could assuage the grief and sense of loss.

However, she spoke of a bigger picture that has slowly been emerging before her these past few months. She said that her sister’s death had given the industry a foundation that was giving rise to a new monument — better treatment for many of the four million workers who work in the garment industry in Bangladesh, which is the second-largest garment exporter in the world after China.

Garment exports totaled $24.5 billion garment in 2014, accounting for more than 80 percent of the country’s export earnings.

Many people have referred to Rana Plaza as a wake-up call, and Begum used those words too.

Giving life to her plan to become a trade union leader one day — she is not working at this time — she noted that wages for workers were increased in November 2013 and that she had heard from many people that the high-handed ways with which garment factory owners often treated their workers have come under subtle change.

Various organizations continue to press for further change, including the International Labor Organization and the two groups of brands and retailers, the Alliance for Bangladesh Worker Safety and the Bangladesh Accord on Fire and Building Safety.

“There are still some very large questions that have not been answered,” said Ian Spalding, senior adviser to the Alliance, regarding the five-year commitment made by the group, which will be completed in 2018. “An important one is whether the government is going to take responsibility as the international community expects.”

Several nongovernmental organization leaders have expressed their concerns. They observe that the government hasn’t been pushing enough for remediation and to complete the factory inspections that are still pending by the National Tripartite Committee, which is organizing inspections for the third, and largest, chunk of garment factories in Bangladesh.

The Accord and the Alliance have completed inspections on more than 1,700 factories, having struggled to come up with common standards, acceptable ways of preventing structural, fire or electrical damage, and ways of increasing worker safety.

“It’s important to think that these efforts will be made sustainable,” said Spalding.

Although it appears that after the work of setting up offices, hiring people, inspecting all the factories, publishing these reports on their Web sites and now beginning the remediation plans of fixing the factories there might be a lull in coming years.

“On the contrary,” said Spalding. “Our activities have really spiked up. We have 45 people in the office and they are working six days a week.”

A help line for workers was recently launched and pilot programs for the Occupational Safety and Health committees for workers will be launched by both the Accord and the Alliance after the Bangladesh government sets standards that will be acceptable for these committees.

“There is a post-Rana world view,” Spalding observed, “which is far more pragmatic and effective. Now it’s really about performance and input. Never before have we had such resources, such senior leaders and the will of companies to address important issues.”

Factory owners have been quick to respond to these changes, and as they look ahead, they say they have two scenarios. “For one, a lot of factories have [got], and will continue to get much better over the next few years,” said Shahidullah Azim, vice president of Bangladesh Garment Manufacturers and Exporters Association. “For another, factory owners will continue to get squeezed — to implement changes and remediation, without any funds particularly for this, nor an increase in buying price from global brands.”

He pointed out that many smaller factories had closed, and will continue to do so, with a view toward consolidation. BGMEA has been trying to set up a garment industrial park in a suitable place outside Dhaka city where all modern industrial facilities can be provided.

A new industrial park is planned, with work starting on it this year on an area of 492 acres near Dhaka-Chittagong highway, adjacent to the Meghna river. It is expected that around 600 knit, woven, dyeing, sweater and accessories facilities will be set up there. The project, which has investment from China, is expected to generate revenues of $15 billion when it is fully operational.

Looking ahead, a big concern that many factor owners have is the country’s political instability.

The differences between the ruling Awami League and the opposition 18-party coalition, led by Khaleda Zia of the Bangladesh National Party, have been the cause of strikes over the last few months, and throughout 2013. Although there has been a flare-up of violence because of the city elections this week, the months of countrywide violence that cost hundreds of lives and a loss in business have begun to calm down this month.

“This is a big relief for the garment industry and their clients,” said Ahsan H. Mansur, executive director of the Policy Research Institute of Bangladesh, observing that the likelihood of peace was now greater for the coming year.

He said that the garment industry would continue to strengthen over the next three years, with the purpose built factories that are already compliant for safety becoming more successful. “However, the next three years will be a real challenge for smaller factories,” he said.

Mansur added that there would be other concerns over the coming years that would change the playing field for the garment industry — the exchange rate vis-à-vis the euro and the fact that other countries, such as Pakistan, Sri Lanka or India, could potentially win more favorable terms of trade with Europe or the U.S., and Bangladesh might then have to struggle for its competitive advantage.

Mansur hoped that in the next few years these same standards for safety would be applied in Cambodia, Vietnam, Myanmar and other countries. “Why should our costs be higher than the others? If it is a global standard, it should be applied to everyone, why discriminate against Bangladesh?” he said.

Over the next three years, there will be a major surge in trade unions. Earlier this month, online registration for trade unions was launched for the first time. More than 300 trade unions have been formed in the last two years, and the number is expected to grow. Factory owners said they are not against trade unions — although their reluctance is apparent. “There is always a fear of external influence and politicization of the trade unions that can only lead to disruption,” said Atiqul Islam, president of the BGMEA.

Officials of the ILO believe that training of trade union leaders is key, and will be a focus in the coming years as well, so that worker leaders know both their rights and responsibilities.

Alonzo Suson, country director for the American Center for Solidarity, Bangladesh, observed that although there has been a historical growth of trade unions over the last two years, 19 percent of applications to form unions were rejected in 2013, which went up to 31 percent in 2014, and has gone up to 57 percent from January to April.

“So it is worrisome and concerning that this happened,” he said. “I’m cautiously optimistic that this will continue to change, though. It’s good that more numbers of unions are being registered — it takes two to three years to start the process.”

From the view of those injured in Rana Plaza — more than 2,500 people were rescued from the rubble — it is going to take much more than two or three years to recover.

“There were more than 100 patients who needed long-term rehabilitation,” said Md. Shafiq-ul Islam, executive director of the Centre for the Rehabilitation of the Paralyzed. CRP is located in Savar, close to Rana Plaza and took in all the patients with spinal injuries and head injuries. He said that over the next few years, the process of monitoring and rehabilitation will continue.

“There are many people who have suffered,” said Islam. “But I think we can feel a brighter hope now. There is still a lot to learn. But now look at the brighter morning, rather than the mourning.”