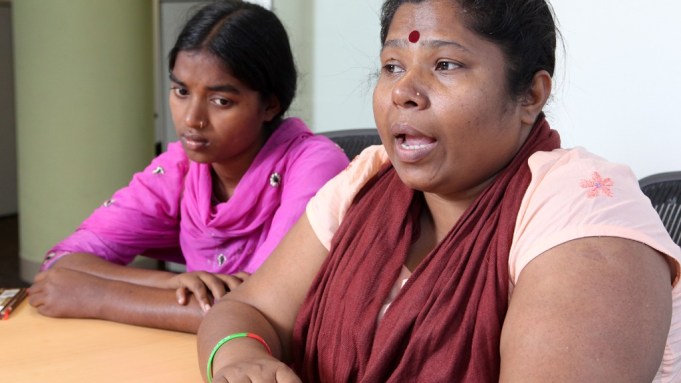 WASHINGTON — A Bangladeshi garment worker who survived the factory fire at Tazreen Fashions in Dhaka that killed 112 workers, and a labor leader who has been jailed for trying to help workers organize, pressed lawmakers and Obama administration officials here on Thursday to intensify pressure on retailers and brands to make a binding commitment to improve fire safety and prevent more deaths.

Sumi Abedin, who survived the fire in November, and Kalpona Akter, executive director of the Bangladesh Center for Worker Solidarity, discussed their cause with WWD in the midst of a 10-day tour that will include Los Angeles, Washington, Bentonville, Ark., Cincinnati, New York, Albany, Boston, Seattle and San Francisco.

Akter said she and a coalition of labor groups have asked Sen. Tom Harkin (D., Iowa) to write a letter to Bangladesh Prime Minister Sheikh Hasina and pressure her to address human rights and labor rights concerns in the country in the wake of two tragic fires in Bangladesh’s garment industry that have killed a combined 120 workers. They would also like Harkin to ask Hasina to fully investigate the murder of labor activist Aminul Islam, whose body was found in April 2012 bearing signs of torture, according to labor groups. Harkin’s office did not respond to a request for a comment.

The groups also met with officials from the Labor and State departments, as well as from the U.S. Trade Representative’s office on Thursday, according to the coalition.

“We are asking them to weigh in with U.S. brands and retailers to encourage the brands to join the legally binding fire-safety agreement,” said Liana Foxvog, organizing director for the International Labor Rights Forum.

“It has been five years since the AFL-CIO filed its petition [seeking to have U.S. trade benefits to Bangladesh withdrawn or suspended because of alleged labor rights violations], and what improvements have there been?” Akter asked. “They put us in jail for organizing and supporting workers’ rights, killed my colleague and burned people in factories — 120 people have died. Is this improvement? No.”

Bangladeshi government officials were on the hot seat two weeks ago at a U.S. government hearing considering whether to revoke or suspend trade benefits given to Bangladesh under the Generalized System of Preferences in the wake of the fires there and alleged violations of worker’s rights, including the right to bargain collectively and form unions. A decision has not been made on the GSP benefits.

Three Obama administration officials hosted a conference call with 70 U.S. brands and civil society groups in March and issued a “set of best practices” for brands and retailers producing apparel in Bangladesh, according a State Department official.

“Unsafe working conditions in Bangladesh were brought into the international spotlight by the Tazreen Factory fire of November 2012, the worst of many deadly manufacturing fires in the country in recent years,” a State Department document posted on the agency’s Web site said.

“The Administration has been concerned about the worker rights situation in Bangladesh for some time, and we have conveyed those concerns on numerous occasions to the highest levels of the government of Bangladesh,” USTR officials said Thursday. “Even before the November 24 fire at the Tazreen garment factory, we had reached the conclusion that too little had been done to address worker rights concerns in Bangladesh and that the circumstances warranted consideration of withdrawal, suspension or limitation of Bangladesh’s GSP benefits, in keeping with the provisions of the GSP statute. The fire has only intensified our concerns.”

The officials said the GSP hearing was to gather information and not to make a decision. Officials expect to announce their next steps on Bangladesh by the end of June.

Asked why she believes other companies have not signed the agreement, Akter said: “First thing, they are greedy people. They want to save every penny for their profits. They don’t want to spend even 7 cents to correct the fire-safety conditions. The fire safety [memorandum of understanding] gives a chance to workers to [help in] improving the process. You would have worker participation, and these [companies] don’t want workers to have that leverage in improving the situation.”

The Bangladesh Center for Worker Solidarity is part of an international coalition of labor rights groups pressing brands and retailers to sign on to the Bangladesh Fire and Building Safety Agreement, which would establish a two-year program to enact in-factory enforcement, develop a process for worker complaints and mechanisms to report health and safety risks, set up independent inspections and publicly report on them, establish a central role for unions and create a binding contract between brands and worker representatives. So far only two companies — PVH Corp. and German retailer Tchibo — have signed it. The agreement will not take effect until at least two more major companies sign on.

Abedin, who does not speak English and spoke through Akter, said she broke a leg and an arm when she jumped from the Tazreen factory’s third floor and has been unable to go back to work in the garment industry. She said she was given $1,350 in compensation, the bulk of it from Li & Fung, which paid into a compensation fund, but has used most of the money on medical expenses.

“We want brands and retailers we produced for to give us compensation,” Abedin said. “We also want a safe working place to be ensured.”

Foxvog of the ILRF said companies have been making promises for years to improve fire safety and working conditions in Bangladesh.

“But it has not been nearly sufficient,” Foxvog said. “We have the attention of lawmakers, the media and of concerned citizens that want to make a difference, and now we need the brands to listen up and clean up their act.”