Britain, EU Appeal to U.S. Not to Raise, Extend Tariffs on Luxury

In August, the U.S. could decide to beef up, and broaden, punitive tariffs on British and European luxury goods which have been caught up in a long-running dispute over government subsidies to Airbus.

The Johnstons of Elgin store in London.

LONDON — Still reeling from the impact of COVID-19 on jobs, business and the wider economy, British luxury brands are bracing themselves for a further blow: The possibility of higher, and broader, U.S. tariffs on British-made luxury goods resulting from the Airbus-Boeing subsidies controversy.

A new U.S. review of punitive tariffs on goods from the U.K. and the European Union will take place over the next three weeks, and beleaguered British companies — and their EU counterparts — are trying to persuade the U.S. not to make any changes for the worse.

“The British government and the EU need to be very focused on this, because it will potentially impact on jobs. We are all trying to take these steps to economic recovery, but if you reduce the possibilities of manufacturing businesses in the U.K., it will be hard to continue to employ people,” said Helen Brocklebank, chief executive officer of Walpole, which represents 270 high-end British businesses across several sectors.

“We are very focused on preserving as many jobs in the sector as we possibly can, because these are long-term skills, sustainable jobs and we are trying to raise awareness and the implications” of the tariffs on British industry. “Nobody wins a trade war.”

Walpole, and its European counterparts, penned letters to the office of the U.S. Trade Representative earlier this week laying out their concerns. The USTR did not return a request for comment on Wednesday.

Last October, the U.S. raised its import tax on high-end products from Britain, including cashmere knitwear, merino wool and Savile Row suits, to 25 percent following a ruling by the World Trade Organization that the U.S. could punish European countries for subsidizing the manufacture of the Airbus fleet.

The U.S. has the right to review the tariffs every 180 days, and can tweak them. The levies could go as high as 100 percent, and the U.S. could also decide to extend them to additional British products, including handbags, china, glassware, sparkling wine and cars, with Jaguar Land Rover, a popular brand in the U.S., one of the companies most at risk.

The U.S. will decide by Aug. 12 what changes it wants — if any — while any new tariffs would come into force in September. Although Airbus has recently vowed to stop accepting the controversial subsidies from Europe, there is little indication that the U.S. would immediately scrap the taxes. The Airbus-Boeing tussle is the longest-running trade dispute in WTO history, and it is understood the U.S. still wants its compensation for more than a decade of European subsidies.

To deepen the drama, the U.K. is trying to negotiate a post-Brexit trade agreement with the U.S., and the hope from the British side is that the Airbus-related tariffs will be canceled once a deal is reached. But given the upcoming U.S. presidential election, and the possibility of a new administration in January, the U.K.-U.S. trade negotiations could take longer than expected.

The EU, including the U.K., which makes wings for Airbus planes in North Wales, is paying tariffs on $7.5 billion worth of exports to the U.S. As part of the dispute, the EU has accused the U.S. of subsidizing Airbus’ main rival, Boeing. The WTO has said the EU can retaliate, although the Geneva-based organization still has to provide the details of exactly what the EU can do.

North America accounts for 20 to 25 percent of British luxury brands’ exports and, prior to lockdown, the British luxury sector was growing at 9.6 percent annually, outpacing U.K. annual growth of 4 percent. 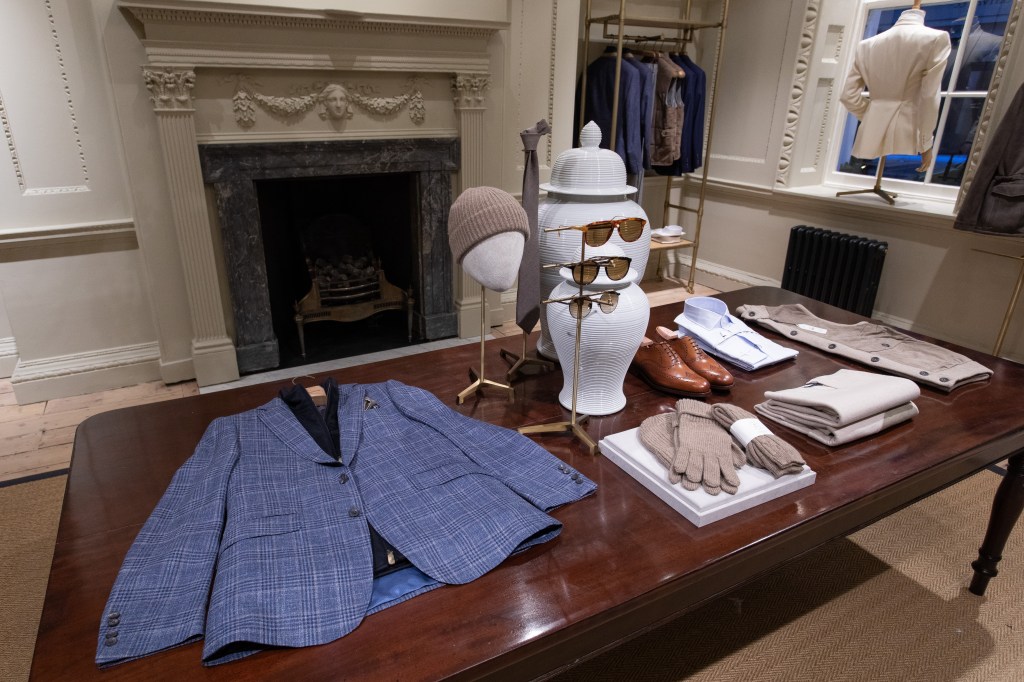 Inside the new Hackett store on Savile Row.  ADAM DUKE

The U.S. is one of the largest luxury markets in the world, and Walpole said 75 percent of British brands identify the region as their “priority growth market,” according to a letter that Walpole sent to the USTR.

Walpole added that for many small and medium-sized enterprises, the U.S. is the number-one international market, and urged both sides to “de-escalate this trade war, which unnecessarily harms a commercially and culturally important trading relationship that dates back centuries and has a positive, mutually prosperous future.”

The letter went on to describe U.K. and U.S. luxury trade relations as a “a collateral victim” of the Airbus-Boeing dispute and argued that higher and broader tariffs would punish U.S. consumers as well as British businesses. The cost of doing business with the U.S. would become prohibitive, and the British would be forced to shut commercial and distribution operations on the ground.

The letter added that prior to the COVID-19 pandemic, “U.K. luxury businesses were in significant expansion phases, but at a time when businesses have been hit hard by this global crisis, the imposition of tariffs on their products could be a fatal blow to further local investment.”

Walpole also pointed out that Scottish whisky makers are shouldering more than 60 percent of the U.K.’s tariff burden right now. But whisky makers aren’t the only ones suffering in Scotland.

Simon Cotton, ceo of Johnstons of Elgin, the Scottish cashmere and merino wool manufacturer, said in an interview that hiking tariffs to 100 percent on luxury knitwear would be “disastrous, and make it impossible to do any knitwear business in the U.S.” Cotton said that, so far, Johnstons has been absorbing the 25 percent tariff, rather than passing it onto customers.

At the start of the year, Cotton said he was hopeful that the Airbus tariffs would be removed quickly as part of a broader U.K.-U.S. trade deal, but because lockdowns delayed the negotiations, he believes that “nothing will get done for a while.” On a brighter note, he said Johnstons stores have reopened, and that trading in Scotland has been “better than expected,” although business in London’s Mayfair is slow due to a lack of international tourists.

Simon Cundey, managing director of the Savile Row tailor Henry Poole & Co., said his American customers have so far been absorbing the latest 25 percent tax, even if it is higher than the usual 18 to 20 percent import tax they were used to paying for years. A further hike in the tax on a Henry Poole suit, he believes, would discourage younger buyers — Wall Street traders or young lawyers — from splashing their cash on a British-made suit. This is especially true at a time when many U.S. bankers work from home for the foreseeable future.

Cundey, like many of his fellow business owners, is frustrated on a number of levels: He believes it’s unfair that luxury makers should be caught up in a controversy involving airplane manufacturing, and argues that British tailored clothing is distinctive, and does not take business away from U.S. brands.

“We’ve been in business for more than 200 years, we made suits for J.P. Morgan and the Vanderbilts. We’re proud of our trade with the Americans, and we don’t feel we’re pricing anyone out of the market or competing with a brand like Oxxford in the U.S. We should embrace our differences — we shouldn’t be killing each other off,” said Cundey, adding that, ideally, the duty on one of his suits in the U.S. should be around 15 percent.

Duncan Edwards, the New York-based ceo of the British American Business Council, a trans-Atlantic chamber of commerce, said the organization has been working with the U.K. and U.S. governments on the thorny issue of tariffs, but there’s not much more persuading that can be done.

He believes luxury businesses have been caught in the crosshairs of the Airbus dispute because they’re relatively safe targets.

“I think the U.S. calculates that they’re not going to lose many friends by imposing a tariff on luxury goods. Nobody in the U.S. is going to say, ‘It’s an outrage that Champagne is more expensive that it should be!’ In some ways, these tariffs are low-risk compared with imposing tariffs on products aimed at ordinary people.”

He added: “These luxury industries also support retail and hospitality jobs in the U.S. so the tariffs are not victimless.”

Edwards said he’s hopeful that as the U.K. and the U.S. get closer to negotiating an agreement that the U.K. will be exempted from the tariffs. “It’s a possibility, although the U.S. has given no indication that would be the case. I do think it would be very difficult for the U.K. to sign a trade agreement if they were still being penalized by these tariffs.”

Even if the U.K. and the U.S. strike a post-Brexit deal, and the luxury tariffs are wiped out, there could be a whole other wave of U.S. duties linked to a planned tax on digital services, or tech tax. The British government is planning to tax U.S. giants such as Apple, Amazon, Google and Facebook on their U.K. revenues.

The 2 percent tax has already been approved by Parliament, and would come into effect in 2021.

The U.S. is already threatening to retaliate, and earlier this month began punishing France for imposing a similar tax on the local revenues of U.S. tech giants.

The Trump administration said it would impose 25 percent duties on $1.3 billion worth of French fashion goods in response to France’s digital services tax.

As reported, USTR Robert Lighthizer said the U.S. would delay implementation of the action for up to 180 days if “the trade representative determines that substantial progress is being made, or that a delay is necessary or desirable to obtain U.S. rights or satisfactory solution.”

That gives the U.S. and France until Jan. 6 to hold “bilateral and multilateral discussions that could lead to a satisfactory resolution of this matter,” the USTR said.

When first proposed in December, the duties on French goods were set at 100 percent, so the result, while punishing for companies importing certain goods, was not as bad as it could have been.