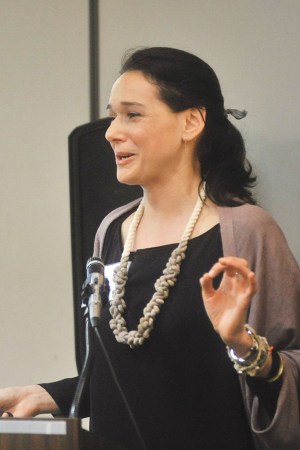 NEW YORK — The path to a better supply chain — from improving working conditions to proper labeling of garments — is through transparency and knowledge.

That was the conclusion of panel discussions at the annual Fashion Law Institute symposium at Fordham Law School held April 19, prior to the apparel factory building collapse in Dhaka, Bangladesh last week. The panels focused on “green” labeling and ways to better monitor global manufacturing and stressed the importance in both cases of accurate and proper certification systems and corporate responsibility and integrity.

Carmen Artigas, dean of ethical fashion at the Center for Social Innovation, said, “You have to feel the responsibility of the life cycle of a product. Some of the issues in the ideals of ethical fashion are the working conditions, responsible manufacturing, traceable supply, respect for the environment, animal welfare and fair trade.”

For example, she said, 68 to 70 percent of apparel and textiles that are manufactured goes into landfills because there isn’t enough awareness or knowledge about recycling.

“Manufacturing has gone to the poorest areas of the world, resulting in a tremendous human and environmental price tag,” Artigas said.

Kim noted that last year, the FTC updated its “Green Guides,” which provide instruction to companies on how to properly use language, certifications and claims about the environment in their marketing.

“It’s important to use specificity when making a claim — the more specificity, the less danger of making an unsubstantiated claim,” Kim said. “Seals and certifications, such as biodegradable, are useful to consumers, but a general claim [such as sustainable] is less helpful and could be confusing to the consumer. Just because you get a certification isn’t enough. You still need to be able to substantiate your claim.”

KC Orcutt, communications director at Organic by John Patrick, which uses only organic cotton, explained the company’s commitment to it and responsible manufacturing. She said there needs to be tax incentives to encourage organic cotton growing in the U.S.

“As the conversation on where the product comes from becomes of more interest to the consumer, the focus on a sustainable methodology becomes even more crucial,” she added.

In the somewhat more serious areas of factory safety and working conditions, Eric Gottwald, senior policy analyst and staff attorney at the International Labor Rights Forum, focused on the recent tragic fires in Bangladesh, noting the key role that apparel manufacturing plays in the country’s economy, including as a major exporter to the U.S. and Europe.

“Since 2006, more than 600 workers have died and hundreds more have been injured,” said Gottwald, not including the estimated 400 that have now perished in the Sana Plaza disaster last week. “Obviously, no one likes this, but the question is what can we do to address this as consumers, as designers, as just concerned citizens and humans.”

He said corporate social responsibility programs are designed more “to manage a brand’s reputation” then to improve working conditions.

“If you are a company making clothes around the world, it’s very hard to maintain control of that supply chain, from product quality to conditions in the factory,” he said. “Brands hire third-party monitors, but the results are confidential and secretive. Workers are desperate to work despite the conditions. If they speak up, they lose their job. Auditors are for-profit and operate in a very competitive industry. Global CSR is a $34 million to $35 million industry. So, there’s always the risk that they’re pulling their punches — you might want to give a company good news because a bad report can be costly.”

The major push for ILRF is for industry and company transparency. Gottwald said one way to achieve this is for the industry and companies to share information and make public their audits and findings. It has established the Bangladesh Fire and Building Safety Agreement, which bans production at any factory that refuses to make needed safety repairs for which the program provides funding, requires public disclosure of the results of all factory inspections, establishes a two-year program to enact in-factory enforcement, develops a process for worker complaints and mechanisms to report health and safety risks, sets up independent inspections and publicly reports on them, establishes a central role for unions and creates a binding contract between brands and worker representatives. So far only two companies — PVH Corp. and German retailer Tchibo — have signed it. The agreement will not take effect until at least two more major companies sign on.

“We have heard from companies that they use these reports as a tool to decide where they manufacture,” Rigby said.

The DOL also makes sure the U.S. government doesn’t purchase goods from companies engaged in child or forced labor and funds educational programs on the issue. Following up on Gottwald’s discussion, she noted that the department is also involved in the ILO’s factory monitoring program, which as a credible, independent entity can provide transparency, and is involved in the ILO’s Better Work program, which assesses conditions at the producer and supplier level to ensure compliance with labor laws in countries such as Cambodia and Haiti.