The textile and apparel section of the Canton Fair saw lower orders and fewer customers. 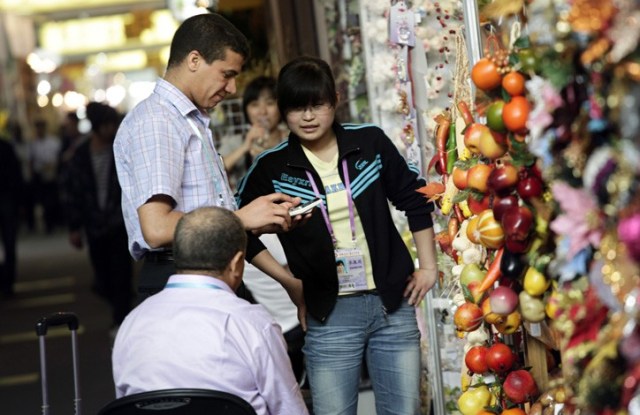 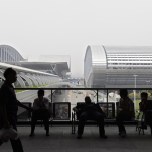 Where American and European buyers once made up the bulk of those in attendance, this year it was just as likely a customer came from the Middle East or Africa.

With the lower orders and fewer customers at the textile and apparel section of the Canton Fair, which ended Thursday, manufacturers and trading companies braced for continued hard times amid the global financial crisis. Yet, they said, there are some bright spots on the horizon coming from emerging markets, even as the U.S. and Europe continue to disappoint.

Still, many long-term export customers have continued to make purchase orders, and the wholesale closure of factories across the Pearl River Delta appears to have abated for now.

Though actual visitor numbers were only down slightly, the volume of orders placed at the fair dropped by 17 percent from last year, organizers said. State-run media quoted a fair official as saying it’s a sign of continuing trouble for China’s export economy.

“Statistics show that China’s exports will continue to decline in the next two quarters,” Wen Zhongliang, director of the fair’s business office, told the Xinhua news agency. “It may get better in the fourth quarter.”

Amid the decline, vendors and trading companies said they will weather the storm until the economy recovers. “Before the fair, we expected the worst,” Luca Chen, a marketing representative for a decorative lighting company in Shantou, said during the home products and toys phase of the fair. “It’s actually been a lot better than we thought, with more customers from new countries.”

Chen said new buyers this year have come from South America and the Middle East, but companies have few American buyers. The trouble, he and others pointed out, is China’s new export buyers often are looking for much lower prices than American and Western European companies. With already thin profit margins, manufacturers are being stretched tighter.

Others weren’t quite so optimistic, with one toy company representative saying, when asked how business was at the fair this year, “Look around,” as he gestured to half-empty hallways and exhibit booths. Nearby, exhibitors were selling off the display goods in their booths hours before closing time.

“Most of the factories in our sector of the toy industry have closed down and we plan to stay in business, but it’s difficult,” said Alex Lou, a sales representative for a plush-toy maker on the central coast.

Predictions have flooded in that the U.S. economy will pick up soon and American buyers will begin returning to China. Still, those buyers have not emerged and textile and apparel makers at the fair faced uncertainty and gloom after an already troubling year of mass factory closures and lost jobs.

The Chinese government has taken several steps to stanch the bleeding of the industry. But industry groups say thus far it has not been enough and only stronger global demand for Chinese products will return healthy growth to textile and apparel manufacturing in China. With many Western companies turning to superlow-cost alternatives like Bangladesh, the outlook for China’s industry remains grim.

In late April, the government announced final touches on a three-year targeted stimulus package designed specifically to boost the textile industry. The new measures include financial support to help firms stay in business and profit, the closure of factories that are “obsolete” and unprofitable and possible further increases in export rebate taxes that already have been raised three times in the past two years. The plan, intended to maintain and even increase growth in production in the industry by more than 8 percent annually (more for larger firms), also includes provisions to encourage energy efficiency among textile manufacturers.

In addition, the plan seeks to redistribute industrial capacity in a more planned way, targeting high-end and technical manufacturing on the eastern seaboard and lower-end, manual work to poorer interior provinces. (For more on the government’s plan, see sidebar.)

Industry insiders remain skeptical about the potential impact of the plan and other government measures, saying there’s not much anyone can do without international buyers. Domestic consumption and emerging markets simply cannot make up what is lost from American and European buyers who order higher-priced goods at larger volume.

“There has been no big difference,” since the government raised export tax rebates and made other moves to help the industry, said Zhai Xiaoping, director of Shenzhen Textile Association. “The situation is mainly determined by the overseas market, by their demand. Business cannot be improved only by changing export rebate taxes.”

Zhai said he remains pessimistic about the outlook for the industry over the next year, despite concerted government efforts to address the situation.

“The key point for our production and sales hinges on the economic recovery of foreign countries,” he said. “If their economies do not experience a major improvement, I do think we can improve.”

Textile and apparel factory managers from several different manufacturing hubs across China reported little to no pickup in their business in recent months. They predicted more tough times ahead as the global slump continues and many said they are hoping simply to ride out the crisis. With the slump, the market for Chinese-made goods continues to shift, often to countries that pay less for the same products.

“We used to have many American and European customers, but now we have none,” said Chang Yan, a marketing representative for a Shandong-based textiles company. “Our overseas customers now come from Japan and [South] Korea.”

On the whole, demand in the national market is decreasing, said Ling Liangzhong, who works for a textile maker in Jiangsu province. “But our company is doing OK,” he added.

In the long term, company and industry officials said the only real solution to returning the industry to its former production glory is a return of those once plentiful but now elusive American and European buyers.

“The government has already done almost everything it can,” said Zhai. “This issue cannot be resolved only by the Chinese government. It will be determined by the situation overseas.”