Pressure is mounting to help stem hazards in Chinese factories. 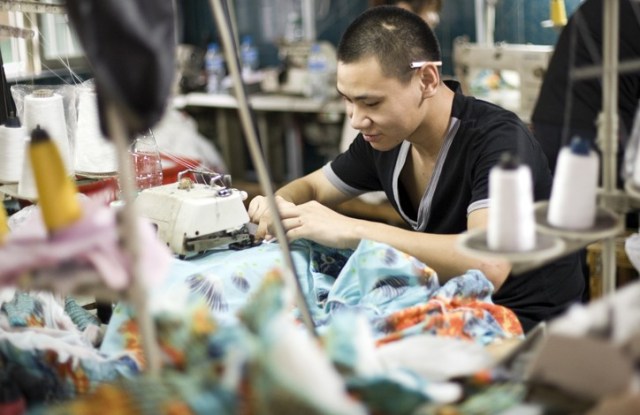 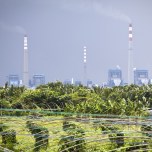 “At the companies I have worked for, the oversight stops with the garment manufacturer. Our executives would come to China all the time, but it was very rare for them to go to the textile mills or printers and see the conditions in which the fabric was made,” she claimed.

“It’s generally not the garment manufacturing factories that are putting heavy metals and dangerous chemicals in the water supply and yet these are the places that overseas executives visit and put their trust in,” Kaye added.

The decentralized nature of China’s government increases the difficulty of monitoring and regulating wastewater pollution caused by manufacturing. Although strong regulations may be set by the Central Communist Party in Beijing, enforcement by local officials can be spotty due to limited financial incentives to penalize local businesses.

“China already has all of these laws on the books about what chemicals you can and can’t use, but they are meant to be enforced by local governments who only get funding, investment and attention from the central government when they are successful,” Kaye said. “They need profitable businesses to invest in their area in order to be successful, but then they are asked to regulate those same companies.”

The Greenpeace report, released last month, documents a yearlong undercover investigation by the organization into two major textile facilities — Youngor Textile Complex in Ningbo, near Shanghai, and the Well Dyeing Factory in the Pearl River Delta, near Hong Kong.

According to the “Dirty Laundry” report, wastewater tested from both facilities was found to contain a range of hazardous chemicals with hormone-disrupting properties — including alkyl phenols and per fluorinated chemicals — which are known to harm immune and endocrinological systems and are restricted across the EU and U.S.

Zhao Hong, the deputy director of the China National Textile and Apparel Council’s international trade office, dismissed the Greenpeace report as “groundless,” and pointed out that Ningbo Sunrise Textile D&F Co. Ltd., a subsidiary of Youngor, had supplied the textile council and Greenpeace with an independent report issued by SGS (a testing agency based in Switzerland) to show their “effluents were up to both international and domestic standards” and in some cases “far better than these benchmarks.”

When contacted by WWD, Youngor provided a copy of the SGS report and a statement that read in part: “The Youngor textile city is in line with national effluent standards,” and “is very concerned about environmental protection and energy conservation work.” Well Dyeing did not return phone calls seeking comment.

A host of international brands were named and shamed in the Greenpeace report for their involvement with these factories or the companies that control them.

On its Web site, Greenpeace has posted letters of response from several of the international apparel companies named in the report. Lacoste and Abercrombie & Fitch said they are investigating the situation at the plants. American Eagle Outfitters said one of the factories supplied fabrics for its garments in the past but is no longer sourcing fabric there. Gap Inc. said it ended its relationship with the factory in question in 2008.

In their responses, Nike, Puma and Hennes & Mauritz confirmed they do business with the Chinese textile companies but their liability is negligible because they only use cutting and sewing facilities at the two plants, rather than “wet processes,” which could lead to water contamination.

Adidas made the same claim. William Anderson, the Asia Pacific head of social and environmental affairs for Adidas, told WWD: “We do not use any washing facilities at Youngor. Our business relationship is only with their cut-and-sew facilities and as far as we can ascertain the only discharges are from the toilets to the general sewer.”

But this “cut-and-sew” distinction means little to Greenpeace.

“At the end of the day, the brands are doing business with the polluters, and the brands don’t have a policy to ensure that their suppliers don’t discharge toxic chemicals. They are perpetuating the pollution,” said Greenpeace campaigner Li Yifang.

Those at the front lines of greener manufacturing in China, such as sustainability consultant Chris Pothaar, are less interested in finger-pointing and more focused on working with apparel brands to ensure sustainable Chinese supply chains.

Among Pothaar’s customers is Nike, who he specifically cited (along with H&M) as a leading brand in dealing with supply chain environmental issues.

“We worked with the former head of sustainable footwear at Nike to try to bring their suppliers up to the next level in reducing and eliminating toxins from their products. Nike has been very proactive about this,” Pothaar said. “The Greenpeace report brings to light the fact that there’s more that needs to be done, even by these progressive brands.”

Looking to the future, Pothaar said he believes the key for China’s sustainable textile and apparel manufacturing is a move to higher-end production.

“One of the things you notice when you work in green supply chains is that low costs and low quality are associated with the most environment impact,” Pothaar said. “When you move into more high-value areas, you get both better quality and less environmental impact.”

Heather Kaye agreed, and said this change is already occurring as wages and production costs rise in China and the lowest end of manufacturing moves on to cheaper centers, such as Bangladesh and Vietnam.

“Good Chinese manufacturers already realize that you can attract a different clientele at a higher price and that gives me hope,” Kaye added. “When it becomes profitable to be efficient and financially mandatory to be cleaner, then we will see a major change.”