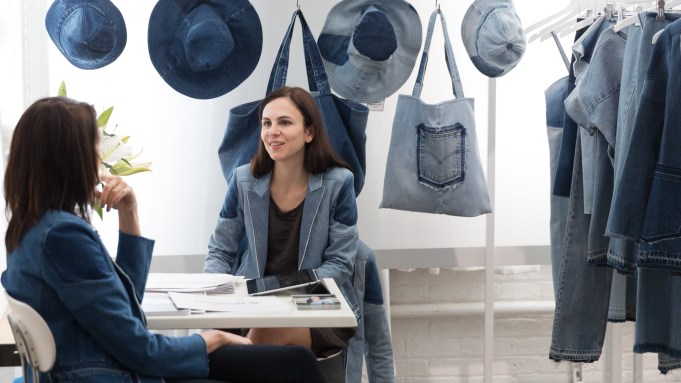 NEW YORK — The dozen design entrepreneurs were uniform in their assessment that the first Made in New York Collective, sponsored by the New York City Economic Development Corp. at the Designers & Agents trade show, hit the mark in a commercial and community sense.

The initiative, meant to bolster New York’s pipeline of creative talent, brought together nine apparel firms and three jewelry companies in their own area in the D&A show at the Starrett-Lehigh building here for three days ending Monday.

D&A conducted a screening process to choose the designers.

Designer Christine Alcalay said the show and experience were “really great,” and she saw old and new accounts at a steady pace.

“There’s been an organic vibe to the show,” Alcalay said. “Buyers were relaxed and took time to look at everyone’s collections.”

On top of that, she said there was a “cool sense of community, of helping each other, since we all manufacture in New York.”

Alcalay uses natural fabrics such as cotton, linen and silk in her line of romantic ready-to-wear.

Jewelry designer Xiao Wang said the number of people visiting her presentation and the designated area of the show was “not what I expected,” allowing her to meet a lot of new resources.

“You can find what you want in New York and the designers and companies here prove that,” Wang added.

Sam Church, who creates her line at a Brooklyn studio and manufactures in the heart of Manhattan’s Garment District, said what she does “is a complicated process that I couldn’t do elsewhere.” The collection of double-layer cotton crepe with a mechanical stretch is created without using synthetic fibers.

“We had a really fantastic response to the show,” Church said.

Off Season creative partners Abra Boero and Judi Rosen, who channel the urban beachscape of the Rockaways as a guide and inspiration for their collection, also lauded the actual business and the collaborative aspects of the presentation.

“The camaraderie with the other designers let you know that you’re not alone,” Boero said. “There were a lot of familiar faces and new ones to the brand.”

Off Season has a store in Rockaway Beach and also wholesales the casual sportswear.

Nikki Chasin manufactures her classic sportswear with playful textiles and intricate details at five factories — four in the Garment District and one in Sunset Park, Brooklyn.

“The collections being shown here are all really different, but the commonality of manufacturing in New York lets us all help each other,” Chasin said.

Noor Zakka’s Noorism reclaims old denim jeans and turns them into apparel and accessories and Zakka said, “It has been an amazing opportunity for us to reach a bigger audience. I can’t tell you how great it has been and we already got a few orders.”

For Lana Ogilvie, who designs Sabre Jewelry, it was the first trade show for the two-year-old company. Ogilvie said the opportunity of being selected and sponsored will greatly advance her business. She also felt that the atmosphere of the D&A show made them a “perfect partner” to host the NYC Collective.

Alasdair’s April Johnson said she’s also one of the designers from the NYCEDC’s Made in New York certified program.

Johnson praised the city’s support and involvement with trying to build back the manufacturing sector over the last few years. Alasdair’s collection is produced in Long Island City and Midtown Manhattan.

“It’s been great to see the designers come together,” said Lizzy Okpo, who designs William Okpo with her sister, Darlene. “It’s like a family. It’s also great to have the support of the NYCEDC. I couldn’t do a show like this if it wasn’t free.”

The Made in New York Collective is one facet of NYCEDC’s portfolio aimed at elevating local fashion entrepreneurs and growing the city’s fashion industry-at-large. This includes Design Entrepreneurs NYC, a “mini-MBA” and business plan competition for emerging fashion designers, and the Fashion manufacturing initiative, which provides matching grants to production facilities committed to upgrading their services through innovation and technology.

NYCEDC estimates that city’s fashion industry employs about 180,000 people, accounting for 6 percent of the workforce and generating nearly $11 billion in wages.