Labor activists say the country is still not adequately addressing the needs of the 4.2 million workers who help fuel the $23.5 billion garment industry.

By Dene-Hern Chen
with contributions from Rock Ronald Rozario
on April 7, 2014
View Slideshow 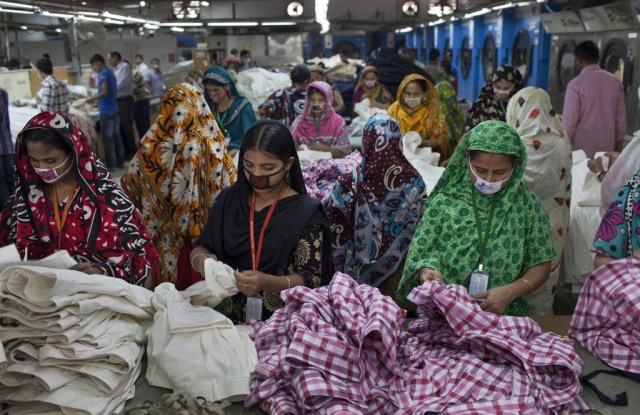 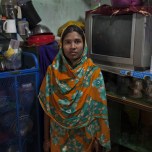 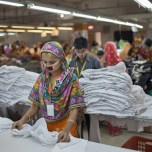 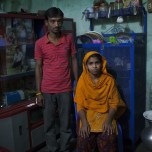 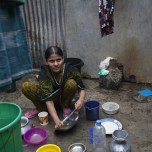 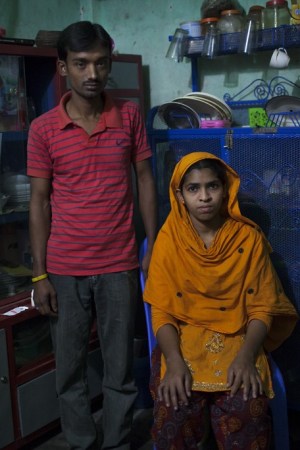 Mohammad Mehdi Hassan Nayan and his wife, Aklima Begun, inside their rented room in Dhaka, Bangladesh. 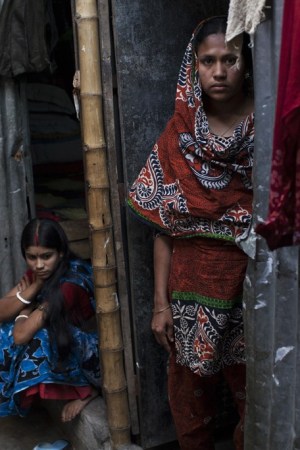 Anjuna Shil (left) and another women in the doorways of their rooms in Dhaka, Bangladesh.

DHAKA, Bangladesh — Seated in a low-income housing unit in a Dhaka subdistrict, Semu Begum spoke fervently of her two-year-old son, Shifat Hassan, who is currently staying with her parents in her home village. Semu has not seen him in more than a year because she must remain in Dhaka for her job at Lifestyle Fashion Maker factory.

“I feel like I should stay with him and take care of him, but I am poor and I have to work,” said the 22-year-old. “I have no other choice.”

Semu’s sentiment is echoed by workers throughout Dhaka almost a year after the Rana Plaza collapse that left more than 1,100 people dead. While Bangladesh is undergoing positive changes in the form of renewed fire and building safety following two massive factory disasters, labor activists say the country is still not adequately addressing the needs of the 4.2 million workers who help fuel the $23.5 billion industry.

One reason is a lack of awareness or a misunderstanding of how unions operate, especially in the historical context of Bangladesh, said Shawn Islam, a Bangladeshi-American owner of two garment factories in Dhaka. He pointed at the manufacturing of jute — a raw fiber used to make sacks — a once-growing industry that manufacturers believe was curtailed by unions.

“Union experience in this part of the world is very bad because it is usually run by bad leadership,” Islam said. “A lot of the jute industry owners moved into the garment industry, and they have had this bad taste and think unions are bad, so they are not very supportive.”

Data from Bangladesh’s Solidarity Center, an international labor rights organization affiliated with the U.S.-based AFL-CIO, shows that union registration shot up in 2013 after the two tragedies, with the government approving more than 80 unions. This is a significant increase compared with the one union approved in 2012. But the current number, which stands at more than 100, makes hardly a dent in a country with 4.2 million workers.

“When workers are part of a union association, they would lose their jobs or face different types of harassment,” the former child worker said in a recent interview.

Improved building and fire safety in factories also does not automatically whitewash the workers’ situation, she said. Women, making up 80 percent of the workforce, only get four months of maternity leave instead of the standard six months afforded by the country’s labor law, and those with children are often separated from them because of an inability to care for them while working long hours, she said.

In addition, the country’s newly mandated monthly minimum wage of 5,300 taka, or about $68 — an amount Akhter considers insufficient to meet living expenses and the lowest in the region — is not instated by all factories, nor are workers getting paid on time. She said factories that have instated the new wage have raised production targets, making it difficult for already overworked employees.

“They are tired and they are being given high production targets,” Akhter said. “If they cannot meet it, the owners cut their overtime and they cut their attendance bonuses.”

Still suffering the effects of a difficult caesarian delivery because of her long hours sitting at a sewing machine, Semu said her total monthly pay of about $77 is insufficient, especially since she sends money to her family to take care of her son and her sick father.

“The pay is still not enough because I can never save anything and I don’t know what I will do for my son’s future,” she said, adding that a combined income with her husband of about $250 a month would be best for their family.

Before the wage rise in November, Semu said workers in her factory were only required to make 50 to 60 pieces of garments a day. She said, “Now they say our production target each day is 100 to 120 pieces. If we miss the target, the supervisor would use abusive language against us.”

Anjuna Shil, who has been a garment worker since she was 13, said she receives less than the newly mandated wage, but was rebuffed when she questioned factory management about it.

“The government should tell the owners to pay us our rightful salary because they are making millions of dollars every year,” the 18-year-old said.

Mohammad Mehdi Hassan Nayan, a 30-year-old cloth cutter in a different factory, said his rent and food prices have increased since the wage raise, which was not implemented for him.

“We were told that if we were unhappy, we can go find another job,” said Nayan, a father of two.

While getting factories to be compliant with the law is key to improving the sector, Alonzo Suson, country director of the Solidarity Center, said a bigger challenge would be modifying cultural attitudes that employers and employees hold toward each other, which can strain an already troubled industry.

“Managers’ resistance is very fierce in this country from many fronts. One is from a class perspective,” said Suson. “It used to be common where the higher bosses in the strata would slap workers for being slow. It was common to beat up workers. But that has already shifted and you don’t see that as often as 10 or 15 years ago. In compliant factories where they do actually pay their workers more, the issue now really is of respect.…For a lot of workers, they call it a ‘mental torture,’ basically a shorthand for being verbally abused,” adding that once this hurdle is crossed, a more productive relationship will emerge.

“Sometimes owners are completely misinformed and they are making their decisions and overreacting without understanding what workers are thinking,” said Islam, whose factories export $100 million worth of clothing each year.

To solve this problem, Islam meets with representatives elected by workers twice a month to discuss any issues, from pay raises and overtime hours to taking holiday leave.

“This has been phenomenal and it created a real touch point between [me] and the workers,” he said. “In the middle of everything that has happened in the last five years, I have had zero strikes in my factories.”

Mohammad Shahidullah Azim, vice president of the Bangladesh Garment Manufacturers & Exporters Association, which represents the country’s more than 4,000 factories, said there needs to be an understanding between employers and workers that unions cannot work at the expense of productivity.

“We welcome trade unions, but it has to be constructive,” said Azim. “Workers have a responsibility, as well. If they only spend their whole day going about union matters, production will be hampered.”

He also claimed that any increase to the minimum wage is unfeasible as buyers refuse to pay factories more. There is a stark disparity between well-known brands putting a price tag of $99.99 on a high-quality shirt while demanding to pay $14.99 to manufacturers, Azim said.

Lejo Sibbel, a representative of the International Labor Organization’s Better Works program, said the immediate direct threat to the industry may be safety issues, but long-term sustainability will depend on the workers and their freedom of association.

“They are the ones that can make sure workers’ views are at the table and workers’ interests are taken into account when there are decisions being made,” said Sibbel, adding that the average worker could contribute to ensuring fire and building safety, as they often know when something is amiss.

A lesson could be gleaned from the accounts from Rana Plaza workers who said they saw cracks in the building before the tragedy occurred.