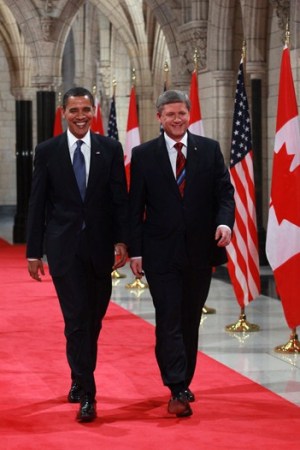 WASHINGTON — Free-falling global economies have tempered President Obama’s once tough talk on trade, forcing him to engage in a balancing act between stricter enforcement of existing policies and implementation of new trade agreements.

Despite Democrats controlling the executive and legislative branches of government for the first time since 1993, the President’s trade team faces challenges from a trade-wary faction of lawmakers in the Democratic caucus, as well as from pro-trade Republicans reluctant to support a Democratic president. Trade veterans expect Obama to take a pragmatic approach in navigating these political waters, allowing some trade liberalization, but at a much slower pace and under a new template emphasizing stronger labor and environmental provisions.

While congressional leaders wait for the President to fully staff his trade team and provide a clearer stance on trade issues, it is anticipated that lawmakers will fill their agendas with legislation aimed at stricter trade enforcement, overhauling customs, and reviewing and possible restructuring of trade preference programs for developing countries.

“[Obama] certainly has, in meetings in Canada with Prime Minister Stephen Harper and on two or three other occasions, made it clear that he believes a viable, growing trade agenda is important if not only to restore our economy but the global economy,” said Mickey Kantor, former U.S. Trade Representative under President Bill Clinton from 1993 to 1996. “He made that quite clear and that is not inconsistent with doing a strong and strengthened North American Free Trade Agreement and enforcing trade laws in a rules-based trading system.”

Kantor believes Obama will focus on three or four priorities, including trade enforcement, a review of NAFTA to strengthen labor and environmental provisions with Mexico and Canada, pushing a pending bilateral trade agreement with Panama and looking at ways to strengthen pending trade deals with South Korea and Colombia to “make them more viable with Congress.” Lawmakers have opposed the Colombia pact over violence and assassinations of trade union activists. The South Korean trade deal has faced opposition stemming from barriers the country has placed on U.S. automobile and beef exports.

The global recession could also act as a deterrent to taking strong action against China’s undervalued currency or alleged subsidized imports, according to trade experts. Obama has said he wants to avoid the appearances of protectionism and has said, “This is no time for a trade war.”

The President recently submitted his 2009 trade agenda to Congress, reiterating his position on several campaign themes, including eliminating unfair trade practices in China, pursuing a review of existing and pending free trade agreements with the “hope” of moving Panama quickly, as well as the pursuit of a successful outcome of the Doha Round of global trade talks aimed at reducing tariffs and other commercial barriers.

China, which shipped $32.7 billion worth of apparel and textiles to the U.S. last year, is on the industry’s radar. Treasury Secretary Timothy Geithner will release a report this spring on China’s exchange-rate policies that could serve as a tool to label China a currency manipulator. This could lead to World Trade Organization sanctions.

While Geithner said at his confirmation hearing that China manipulates its currency — a statement from which the White House later retreated — the industry is uncertain what steps the Obama administration will take.

“It is hard to say what will happen with China because of the economy being in such flux,” said Cass Johnson, president of the National Council of Textile Organizations, which is part of a broader coalition aimed at pressuring the administration to label China a currency manipulator.

“[Lawmakers and trade officials] are worried about doing anything” against China, said Johnson. “The momentum is on their side because the financial system is involved and there are a lot of people who are scared about what is happening out there in the global economy. That could make it harder to do something on China. I think that’s unfortunate.”

One initiative the Obama administration could take that is supported by textile producers and opposed by importers is the reinstatement of the Vietnam apparel-import monitoring program. Congress recently gave guidance to the administration in a report accompanying a spending bill to resurrect the program, which expired in January, and expanded it to include apparel imports from China.

David Spooner, an attorney with Squire, Sanders & Dempsey and a former assistant secretary of commerce for import administration, said the Obama administration seems to be trying to balance the various factions within the Democratic party on trade, adding that is why there is a mixed message so far.

“You have a sort of protectionist wing of the Democratic party, which is a large contingent, making fairly specific demands, and you have a more Clintonite wing of the party, which is more pro-trade, and hopes to move some items on the trade agenda,” Spooner said. “There is no evidence of the political will there yet. The administration doesn’t want to be protectionist, but it doesn’t want to do anything bold either.”

A group of 54 House Democrats and Republicans, including several chairmen of key committees, recently sent a letter to Obama expressing their opposition to pending trade deals with Colombia, South Korea and Panama. They also called for “remedying the failed U.S.-China trade relationship” by resolving the China currency manipulation problem and halting negotiations with China on a bilateral investment treaty, launched by the Bush administration.

“Correcting our past trade and globalization policy mistakes and moving forward on a new path can help our nation face our considerable economic challenges,” said Rep. Mike Michaud (D., Maine), who leads the House Trade Working Group, a group of lawmakers dedicated to a fair trade platform that mitigates the impact of global trade on U.S. workers and companies. “Much of what these members of Congress see as the way forward is the very trade reform agenda that the President pledged to implement during his campaign.”

Rep. Sander Levin (D., Mich.), chairman of the House Ways and Means’ subcommittee on trade, said last week that Democrats will pursue a trade enforcement agenda but will remain “on guard against actions that can legitimately be called protectionist.”

Levin said there is also support for Obama’s plan to try to revive the faltering Doha Round of global trade negotiations, which have languished for nearly eight years over differences on agriculture subsidies between rich and poor countries.

“I think that it’s consistent to proceed with an effort to beef up enforcement and to try to rekindle the Doha Round,” Levin said. “I don’t think there’s anything at all inconsistent with that.”

Others believe Obama will not abandon trade liberalization, based on the initial trade blueprint.

“The impression I have is that [Obama] is trying to cast international trade in a much more positive light and more to the health of our economy than I think you might have expected based on some of the statements on the campaign trail last year,” said Stephen Lamar, executive vice president of the American Apparel & Footwear Association.

Lamar said he expects Congress to pass and Obama to sign the Panama trade deal this year. He also said Colombia could move this year if the Obama administration is able to find a compromise with organized labor, which is vigorously opposed to it. But he believes South Korea still faces many hurdles from both political camps.