LONDON — British Prime Minister Theresa May condemned “the single, evil ideology of Islamist extremism” for the recent atrocities in England, as The British Fashion Council said Sunday that it would seek fresh security advice from police in the wake of the weekend terrorist attack in London that left seven people dead and 48 injured.

The attack took place in bustling central London on Saturday night just days before Britain’s national general election on June 8 and the start of London Fashion Week Men’s, which is set to run from June 9 to 12.

Prime Minister Theresa May confirmed in a Downing Street speech Sunday that campaigning, which had been suspended, would resume on Monday, and that Thursday’s election would go ahead as planned. She condemned “the single, evil ideology of Islamist extremism for the recent atrocities in England.” The London attack followed the terrorist bombing at an Ariana Grande concert in Manchester, England, on May 22 that killed 22 people.

On Sunday, the BFC told WWD: “Our security teams and events team will re-group on Monday and, under guidance from police, update and/or amend security procedures, as advised.

“We take the security of the event and the safety of our guests incredibly seriously. This procedure is followed before every major event that the BFC organizes. In the meantime, we are hoping our team and the teams we work with, support and promote, are safe and well.”

The BFC added there are already security procedures in place, and the organization is in constant communication with the guests and designers who are attending London Fashion Week Men’s from around the world.

The London schedule does not have any shows or presentations taking place near Borough Market, London Bridge or Bermondsey, where the attack happened. Most events are due to take place in west London or at the BFC show space on The Strand.

Swathes of south London were in lockdown on Sunday following the attack, the third terrorist atrocity in England over the past four months. On Saturday night, three suspects were confronted and shot by the police in Borough Market within eight minutes of the first 999 call, May confirmed.

The three, dressed in fake suicide bomber vests, drove a white van over London Bridge, slamming into pedestrians. After abandoning the van, they pulled out knives and began stabbing people around the market, which by day is filled with food stalls, and in the evening buzzes with bars, cafes, bakeries and restaurants.

The incident took place near the Fashion and Textile Museum, which last week opened “The World of Anna Sui” exhibition. The area where the attacks took place has been cordoned off, with many unable to get to work on Sunday.

May, dressed in black and speaking outside No. 10 Downing Street, called religious extremism “an ideology that claims our Western values of freedom, democracy and human rights. It is incompatible with the religion of Islam, a perversion of Islam and a perversion of the truth. Defeating this ideology is one of the great challenges of our time.”

She said Britain had made “significant progress” in disrupting plots and protecting the public since the first attack in March. “But it is time to say ‘enough is enough.’ Everybody needs to go about their lives as they normally would. Our society should continue to function in accordance with our values. But when it comes to taking on extremism and terrorism, things need to change.”

The Metropolitan Police confirmed in a statement that it is treating Saturday’s strike as a terrorist incident and a full investigation is already under way, led by the Met’s Counter Terrorism Command.

In the wake of Saturday’s attack, police have also issued a new infographic warning Londoners to “Run, Hide, Tell” in the event of further incidents. 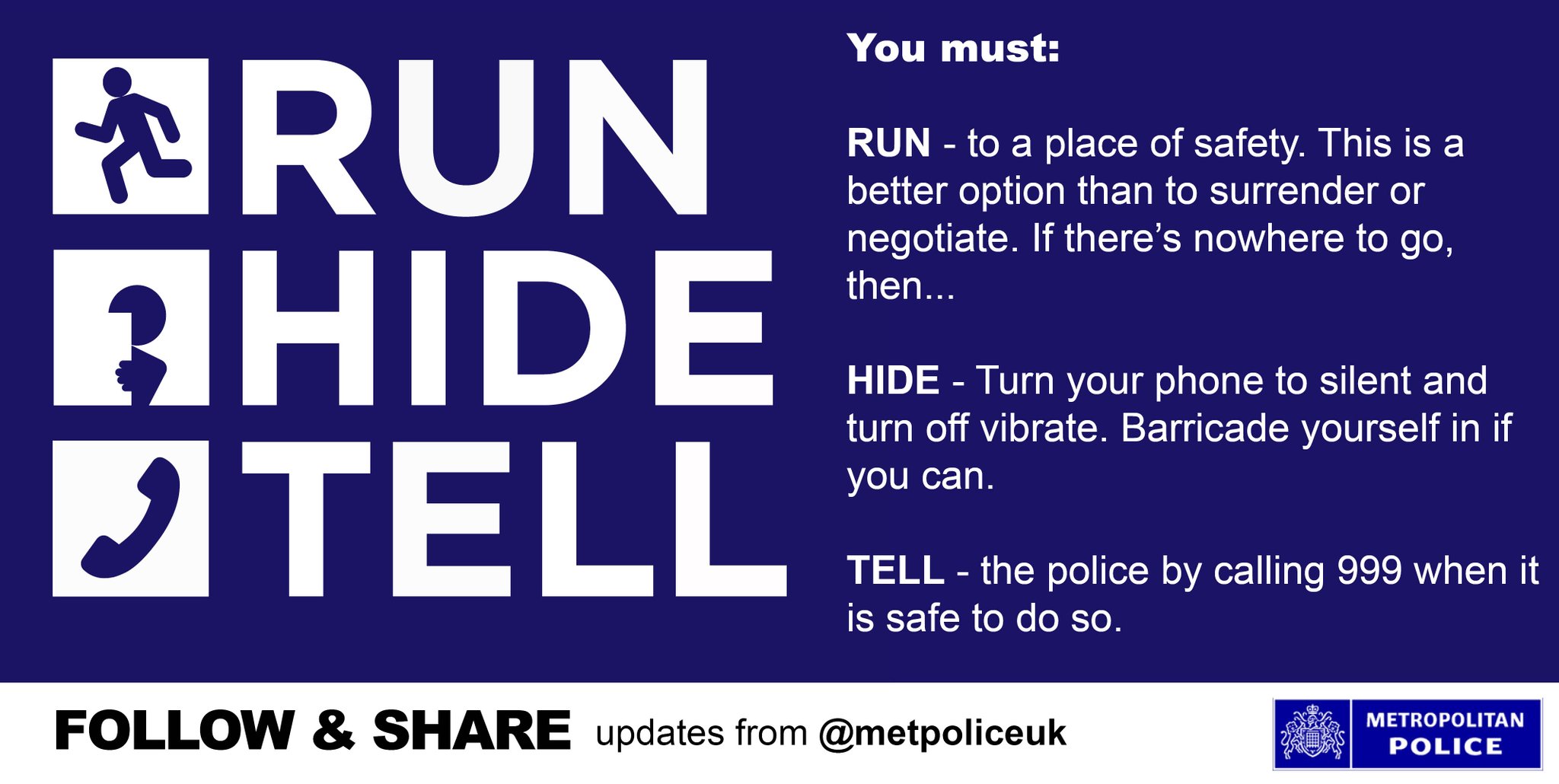 The warning, which appears on the Met’s website and on Twitter, tells people to “run to a place of safety” rather than surrender or negotiate with attackers; to turn mobiles to silent and hide or “barricade yourself in if you can.” It says to only call 999 when it’s safe to do so.

The directive is in stark contrast to the usual “remain vigilant” and “keep calm and carry on” advice that police usually dispense in these circumstances.

Security has also been stepped up in Manchester, England ahead the planned One Love Manchester concert at Old Trafford Cricket Ground on Sunday. Justin Bieber, Coldplay, Katy Perry, Miley Cyrus, Pharrell Williams, Take That and Usher were set to join Ariana Grande in raising money for the victims of the Manchester terrorist attack.