Bangladesh Debate Boils Over in Boston

A recent conference at Harvard University featured one of the most public and contentious discussions about the nation’s apparel industry in years. 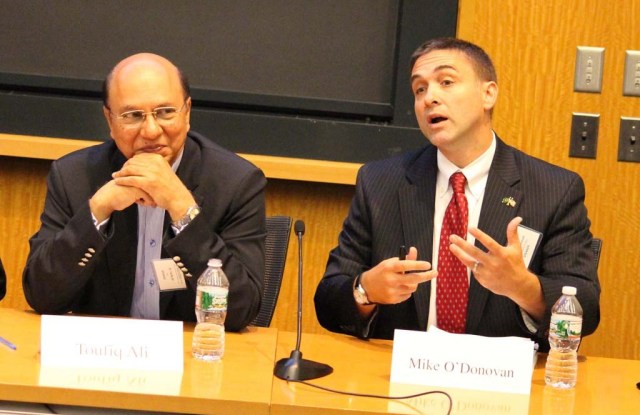 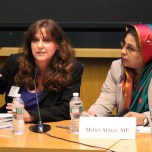 BOSTON — The debate over Bangladesh has shifted from worker safety to workers’ rights.

At a recent conference at Harvard University, government and industry officials, union representatives and academics engaged in one of the most public and contentious discussions about the nation’s apparel industry in years. The discussions involved U.S. congressmen and Bangladesh ministers, labor leaders, a delegation from Bangladesh, academics from American universities and representatives from the International Labour Organization, International Finance Corporation and BRAC, the rights organization. The labor groups have pushed for greater safety and workers’ rights in garment factories in Bangladesh over the last 18 months, after the collapse of Rana Plaza and the Tazreen fire that cost more than 1,200 workers their lives.

The representatives of the Bangladeshi government and apparel industry were in the U.S. on a three-city tour to talk about the progress in improving working conditions in the nation’s garment factories. After stops in Washington and New York, the officials traveled north to Boston and expected the discussions there to again focus on factory conditions.

Instead, Western officials wanted to talk about workers’ rights and the failure of the industry and government to speed the formation of unions in the apparel sector.

Commerce minister Tofail Ahmed and Atiqul Islam, president of the Bangladesh Garment Manufacturers and Exporters Association, shared the statistics with some well-won satisfaction — less than 2 percent of the approximate 1,500 factory inspections that have been completed in the last several months needed to be shut down on account of severe structural damage. “This is an important validation, given that everyone has been assuming that all the factories in Bangladesh are suspect,” he said.

But at the conference — to some apparent bewilderment of the Bangladesh delegation — it appeared that the focus had clearly shifted to the working conditions and issues about worker unions.

Rep. George Miller (D., Calif.) referred to specific cases of harassment on a panel he shared with Ahmed; meanwhile, the minister referred to the significant progress Bangladesh made in the last year, and cited a survey claiming workers in Bangladesh were happy. The minister cited the progress on various fronts, including a wage increase, the amendment of labor law and factory inspections.

Miller was not impressed.

There were several critical moments of confrontation.

Celeste Drake, trade and globalization policy specialist for AFL-CIO, observed, “It is my sincere belief that workers’ blood should not have to be spilled in order to get attention for gross and abusive violations of workers,” while explaining that she had testified before the U.S. government committee deciding on Generalized System of Preferences for Bangladesh, winning her some immediate ire from the delegation.

She shared several insights. “In addition, separate from the action plan we see some very disturbing information. One, we think that the minimum-wage increases are not playing out to the benefit of the workers. What we’ve heard is that some payments that used to be separate from the minimum wages have been rolled in, and quotas have been increased so workers are doing additional hours and it’s not as rosy as it may seem.

“In addition to the record, historic number of unions, we are also seeing record, historic repression. In about 20 percent of organization drives that are reporting to our sister organization, Solidarity Center, there is a severe repression of the organizing and that includes violence,” Drake added. “The key is it really has got to be government action.”

Her speech stirred a strong reaction from the Bangladesh delegation, which questioned the percentage of trade unions active in the U.S. Drake responded it wasn’t necessarily the number (7 percent in the private sector, 35 percent in the public sector), but rather the freedom of association without fear of retribution, that was key.

BGMEA president Islam reacted, saying, “We are a sovereign country, we may be poor but we have our dignity, the workers have their dignity.” He said that while the garment industry’s growth was not planned in the past, “now we are doing things in a planned way.”

Scott Nova, executive director, Worker Rights Consortium, noted that the issue for garment factories was not just Bangladesh, but rather a global problem. He had some concrete suggestions, in which brands bear share responsibility. “The reality is unsafe factories across the board, the government has to enforce its own building-code standard, it has to enforce its own labor standards, including the right to organize. We cannot have the government allowing physical attacks on unionized workers. But the brands have to play a role as well,” he said, observing that brands would have to be willing to accept moderately higher prices for the cost of the products.

He challenged the idea that 98 percent of factories in Bangladesh were considered safe, especially since some basic fire safety requirements, such as handrails in the center of stairwells, were missing. Srinivas Reddy, country director of the International Labour Organization, who had presented an update on the safety inspections and the situation in Bangladesh, was hauled back for further questioning.

“I think it’s important we’re all in the same room,” said Mara M. Burr, deputy assistant U.S. Trade Representative, who added a note of calm to fraying tempers, after talking in some detail about the GSP and the first TICFA meeting held in Dhaka last month and the tariffs that Bangladesh wants reduced.

“I would just like to note that we are friends — we are trying to work together, and friends need to be honest with each other and need to point out clearly what the problems are and how we work on them, together,” she said. “So I was a little taken aback by the last panel where there was this sense that the United States was lecturing, or dictating or wanted something — that’s not the case. Everyone knows that these things are in the best interest of the country, and we just want to have a conversation about that so that we have a joint effort and that doesn’t appear one-sided.”

Addressing the unspoken concern that was growing in the room, she said, “We are not here to lecture. We’re not here to point fingers. But we are here to make progress.” She then added praise: “We do applaud the union registrations, we do applaud the inspections, we applaud the work by the ILO. We do note the problems that my colleagues have raised, and we have a very active and robust conversation going on in Bangladesh.”

Addressing the repeated concern about the high tariff paid by the Bangladesh government in the U.S., Burr pointed out that Bangladesh pays the same amount as China and other countries, and the cases where it was less were only for a Most Favored Nation.

A view from the Labor Department also clarified some issues.

“The U.S. Department of Labor is doing everything it can to help the government of Bangladesh address these issues. We have technical assistance through the ILO to help train inspectors for fire and safety; we have technical assistance through the Solidarity Center, who has representatives here,” said Michael O’Donovan, international economist, Department of Labor, who has been working on GSP and Bangladesh since. The Labor Department has supported the Better Work Program and has appointed a labor attaché who will be going down to Dhaka this summer, he said.

Like Reddy, he praised the progress that had been made and the 157 worker unions that had been formed in less than a year. “It is incredibly inspiring to go and meet these. But the greatest threat to all of this [progress] is the increasingly violent harassment of these unions, which was about 20 percent and is more like 15 percent now. Those cases threaten to undermine all the work that has been done. It is incredibly important that the government and all the stakeholders focus on this issue, right now,” he said.

Toufiq Ali, a former Bangladesh diplomat, made his point simply: “Labor rights come in stages, it doesn’t come overnight, and happens as labor understands its rights and responsibilities. It comes in stages. If you try and impose it from outside, it will never work.”

Alyssa Ayres, senior fellow at the Council on Foreign Relations, added some perspective, pointing out that it had been a particularly difficult year for Bangladesh, with the elections and the hartals, or strikes, further impacting the garment industry.

Boston was the last stop in a four-city tour by the 10-member delegation from Bangladesh, which included stops in Washington, New York and Las Vegas. After the final segment in Boston, Islam told WWD, “As a whole, we found there was a misconception, a one-sided thinking that we are not taking care of our workers, abusing them, not paying them on time. But in our country, despite the 4.4 million workers that are working in one sector, there is a shortage of workers, of skilled workers…if we abuse workers, do you think we can keep the worker in our factory? No way.”

He observed that the organization was open to advice, and criticism, but he stressed the importance of balance. “When you criticize to say, ‘Here is how to make things better,’ that is positive criticism. But when you say ‘Everything is bad,’ that is demoralizing for us; it is demotivating.”

Still, he said, the BGMEA would continue to seek progress.

“We have 4.4 million workers, the trade unions are new, things can happen anywhere. We are looking at finding solutions and a win-win situation for everybody. And that is a sustainable situation,” he said.