Fashion Caucus aims to gets legislation passed and jobs saved. 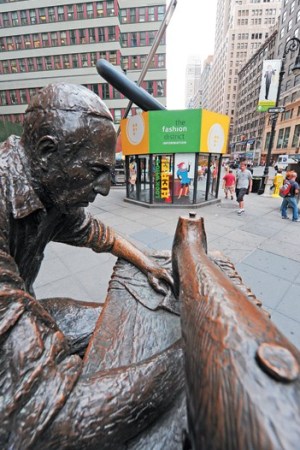 Two of the caucus co-chairs, Reps. Carolyn B. Maloney (D., N.Y.) and Jerrold Nadler (D., N.Y.), said in separate interviews on Capitol Hill that their goal is to get a bill passed that would provide three years of copyright protection for fashion designs and separately work with Mayor Michael Bloomberg and city council officials to preserve New York’s Garment Center.

But key industry trade and lobbying groups have priorities of their own they would like the caucus to address, ranging from trade issues to broader intellectual property rights matters.

The group, named the Congressional Apparel Manufacturing and Fashion Business Caucus, received approval in March from the Committee on House Administration and several industry associations are gearing up to provide input to caucus members.

It is cochaired by Maloney, Nadler and Rep. Diane E. Watson (D., Calif.), lawmakers from states representing the largest apparel manufacturing and design centers in the country.

“We are working on a bill now for copyright protection and we are going to pass it this session,” said Maloney.

The bill, known as the Design Piracy Prohibition Act, would allow companies and designers to register their fashion designs for three years of copyright protection. Apparel, handbags, footwear, belts and eyeglass frames would be covered.

The legislation has not moved beyond committee in the House or Senate due in part to some industry opposition, but industry groups said they continue to negotiate over technical aspects of the bill to reach a consensus.

The Council of Fashion Designers of America has championed the measure, but it has been opposed in its current form by the American Apparel & Footwear Association and some apparel companies.

“Counterfeits with pirated designs and fake labels are absolutely prohibited by law, but it doesn’t provide any protection for the same fashion design when the pirates omit the label,” said Maloney. “One of the challenges we have is that people will go to a show and just sketch it, and by the end of the day, print it out and ship it out on the Internet to another country to make a copy of it. We’ve got to stop that and we will stop that.”

Nadler said the need to coalesce support and move the design piracy bill was his “main motivation for doing this,” referring to his participation as a caucus co-chair.

“It is extremely important because increasingly, what we do here is design, and if our designers are knocked off and no royalties are paid,” it will be detrimental to the fashion industry, he said. “I think it is very key to the continued health of the industry in the United States.”

Maloney said she will try to organize a Congressional trip for lawmakers to New York’s Garment Center to see how designs are created and how easily they can be pirated.

Kevin Burke, president and chief executive officer of the AAFA, said discussions are ongoing over the design piracy bill and the caucus could be helpful on that issue, as well as several others the industry faces.

“We’re moving along, but we are not there yet,” said Burke, referring to efforts to reach a consensus on design piracy legislation. “There are a lot of shared points we do have with CFDA and a caucus could be helpful to both groups.”

Steven Kolb, executive director of the CFDA, said the design piracy bill continues to be “a priority” for his members.

“The caucus really deals with issues at the federal level and anything they can do to help us with something like this law should really be a focus,” said Kolb, noting there has been “steady movement in the right direction” in finding a compromise bill.

Kolb said the CFDA has a close relationship with Maloney and Nadler, and the caucus will represent a continuation of the conversations around the issues of design piracy and preserving New York’s Garment District.

“To have their voice to talk about things like the Garment District, which is important to so many of our members, and how we can look to create jobs that could strengthen production here is important to us, as well,” Kolb said.

Assisting in the fight to save the Garment District is also a key objective of the caucus, the two co-chairs said.

“The designing is still there and it should be maintained,” Nadler said, adding the industrywide effort to save the center is making some progress.

“They are enforcing some land-use things better now,” he said, noting Bloomberg is also more involved and “sympathetic” to the plight of the district.

Bloomberg’s administration has spent the past few years trying to work out rezoning issues for Garment Center tenants.

Even as these issues percolate, other industry trade and lobbying groups would like the caucus to make trade matters a priority.

“One of the things I am hopeful the caucus will do if it becomes active is to explain to members of Congress, who may not know, how global our industry is,” said Burke, adding he will stress the importance of the industry’s global supply chain and efforts to knocking down trade barriers.

For Julia Hughes, president of the U.S. Association of Importers of Textiles & Apparel, the caucus provides an opportunity to discuss important trade matters.

Hughes said she would like to work with the caucus on extending a trade preference program with four Andean countries and the Generalized System of Preferences program, as well as supporting expanded benefits for Haiti. The GSP provides duty free entry into the U.S. for about 4,800 products from 131 beneficiary countries and territories.

“The caucus gives us an added impact to have conversations with the members of Congress and their staffs,” Hughes said.

Cass Johnson, president of the National Council of Textile Organizations, said his group would try to collaborate with the new caucus on trade concerns. The textile industry has its own caucus in the House, which also promotes issues for the industry.

“I think there are trade issues that we would have in common,” Johnson said. “The apparel industry loses jobs to bad trade practices exactly like our industry does. We would certainly like to talk to them about their agenda and see how we can work to make sure both textile and apparel jobs remain in this country.”