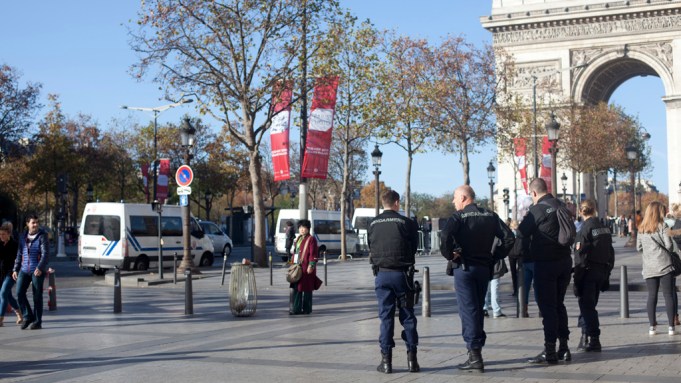 PARIS – “Love, light, peace: This is what we have to find, inspire and spread.”

So declared Christian Lacroix on Sunday as Parisians woke up to bright sunshine that contrasted with the second day of national morning as France reeled from the aftermath of terrorist attacks in the capital Friday that left at least 129 dead and hundreds injured.

Police ordered citizens to stay indoors as much as possible, as some 3,000 troops patrolled the streets.

Stores are normally closed on Sunday in France, but so were museums by government decree.

Numerous French dailies published exceptionally on Sunday, commemorating those killed and injured in the attacks. Le Figaro’s special edition carried the page-one headline “Le chagrin et la colère” (or “Grief and anger”), accompanying a photograph of a person kneeling before a commemoration to the dead. All of the issue’s 16 pages were devoted to the Paris attacks.

A bouquet of roses in the lower left corner added poignancy to Libération’s stark, black front page. Its 24 pages carried articles ranging from a focus on how the simultaneous attacks were a new phenomenon for France to the sense of solidarity in hospitals caring for the wounded. The paper’s back page featured a piece by Laurent Joffrin, the title’s editor in chief, alongside a photo of a black-and-white sign reading: “Je suis Paris” (or “I Am Paris”), which is a continuation of the image wrapping around to the front page.

French weekly news magazine L’Express came out with a special edition titled: “Comment Gagner La Guerre” (or “How to Win the War”).

L’Equipe’s Sunday paper was emblazoned with the words “En Deuil” (or “In Mourning”), accompanying a photograph of hands lighting candles placed in the shape of a heart, while Le Parisien had “Résistons” (or “Resist”) and Le Journal du Dimanche had “La République face à la barbarie” (or “The Republic in the face of barbarism”). “La Terreur à Paris” (or “Terror in Paris”) read Le Monde.

A special service for the families of the victims and wounded is to be held at Paris’s Notre Dame Cathedral at 6:30 p.m. local time on Sunday.

Djamila Houd, a receptionist at Isabel Marant and mother of a young daughter, was among those killed in Friday’s attacks. “Isabel and her team are devastated by the catastrophe and sends their condolences to the families of all victims,” Isabel Marant chief executive officer Sophie Duruflé told WWD. The executive added that another employee of the company lost her young husband in the attacks.

Véronique Geoffroy de Bourgies, a former fashion and lifestyle editor who collaborated to publications including Figaro Magazine and Vogue Hommes, also died in the attacks at age 54. Her  husband, Stéphane de Bourgies, a successful photographer known for his celebrities portraits, is scheduled to appear on French station TF1 tonight.

Joggers and tourists roamed around Place de la Concorde under clear, vividly blue skies, as gates to the Tuileries Gardens were sealed. The streets around Montmartre also came to life, with tourists and locals sitting in cafés and merchants on the Rue Lepic doing brisk business selling gourmet foods.

Street traffic was light in the Marais district on Sunday afternoon, typically thronged with hipsters and tourists as it’s one of the few areas in Paris where shops are typically open.

Saturday was even more muted, with department stores Galeries Lafayette and Printemps closing their doors after just a few hours of trading and other retailers nearby, such as Sephora and boutiques on Rue du Faubourg Saint-Honoré, remaining shuttered. Museums, schools and street markets in Paris were closed by decree, and soldiers patrolled alongside police throughout town.

Galeries Lafayette said in a statement it had initially decided to open its Galeries Lafayette stores on Boulevard Haussmann and in the southern district of Montparnasse, as well as the BHV Marais store in central Paris, as a “symbol of its civic values and its will to resist in the face of terror.”

It said it had decided to close the stores “given the difficulties in ensuring an optimal service quality for our clients. No external alert in particular prompted the group to take this decision.” A spokeswoman for the group said reports of a suspect package at the store were incorrect, and other Galeries Lafayette stores across France remained open.

She added that the retailer intended to reopen on Monday.

A spokeswoman for Printemps said it had decided to shut its four stores in the French capital, in addition to two in the suburbs, because many members of the staff were absent in the wake of the attacks that unfolded starting Friday night and lasted into early Saturday morning. The Boulevard Haussmann flagship was not scheduled to open on Sunday.

Paris department stores have stepped up security checks as set out under France’s Vigipirate program since the country was hit by a first wave of terrorist attacks in January.

“These measures have today been significantly reinforced across our entire network, and in particular the Paris flagships. Galeries Lafayette Group is naturally permanently in touch with the authorities and will follow their recommendations to the letter,” Galeries Lafayette said. The store plans to open on Monday.

The stores in the French capital run by Kering, whose brands include Gucci, Saint Laurent and Bottega Veneta, were also closed.

A Kering spokesman noted: “Given the state of emergency that was decreed and as a measure of safety for our employees, our brands’ boutiques in Paris will remained closed this weekend.”

L’Oréal has implemented an immediate, temporary business travel ban to France until Nov. 23, according to a company spokeswoman.

The New York Times on Saturday postponed the luxury conference scheduled for next week at Versailles. “In the context of what has occurred, the declared state of emergency in France and the three days of national mourning, it would be inappropriate to hold the conference at this time,” Stephen Dunbar-Johnson, the Times’ president of international, wrote on the newspaper’s Web site on Saturday. “We apologize for any inconvenience caused and will be back in touch on Monday with further details.”

Mapic, the retail property trade show scheduled for Nov. 18 to 20 in Cannes, France, was slated to go ahead as planned. Organizers said they were liaising with the French authorities to ensure client security and advised attendees that “increased security measures at airports may lead to journey delays.”

In the art world, the Louis Vuitton Foundation, the Frank Gehry-designed art museum that opened last year, was to remain closed all weekend.

Paris Photo, the annual fair bringing together more than 147 galleries from around the world at the Grand Palais, remained closed, citing the order that all cultural institutions in the Ile-de-France region be closed.

“Reed Expositions, the Paris photo team and all the exhibitors extend their sincere condolences and sympathy to the families of the victims of the attacks and share in the national mourning decreed by the president of the Republic,” Paris Photo wrote on its Web site. The fair is scheduled to run through Sunday.

Meanwhile, GQ France has postponed its Men of the Year party, originally scheduled for Nov. 18, WWD has learned.

Members of the international fashion community expressed their solidarity with the citizens of Paris on social media.

“Ralph Lauren sends its deepest thoughts and prayers to Paris, always the City of Light,” read the @RalphLauren Twitter account.

“Sad Sunday in Paris,” Alber Elbaz wrote on his new Instagram account, sketching himself with a glum expression next to a heart in the colors of the French flag.

French President François Hollande on Friday night declared a state of emergency and the reinstatement of border controls in France. On Saturday morning, he announced the country would respect three days of national mourning.

“France is strong and even if she can be injured, she will always rise again and nothing can touch her, even if we are assailed with grief. France is resistant, active, it is robust and it will triumph over barbarity,” he pledged.

The president was attending a France-Germany soccer game at the Stade de France on Friday evening when at least one explosion was heard in the stadium as several suicide bombers set off their charges. Hollande was evacuated and immediately held an emergency cabinet meeting.

The state of emergency, last declared 10 years ago during a wave of urban riots across France, means some locations are closed and traffic can be suspended. It also gives the authorities powers to conduct searches in the hunt for the attackers.

Men wielding machine guns sprayed bullets at people gathered in several cafés and restaurants in the east of Paris on Friday night.

Several dozen people were shot to death at the Bataclan concert hall, where California band Eagles of Death Metal was playing a concert when several gunmen fired shots into the audience, according to eyewitnesses.

The Brigades de Recherche et d’Intervention, an elite police special unit specializing in hostage kidnappings, ended the siege by killing the suspected terrorists in a raid.

The state of emergency allows French authorities to create no-go zones or decree curfews in areas considered sensitive. They may also ban from France any individuals considered a risk to public order, requisition people or resources, and conduct searches.

Local authorities in the Ile-de-France region are authorized to ban public demonstrations and meetings, close certain public facilities including concert halls and bars, and confine to their homes anyone considered a risk to security and public order.

“We are at war. We are therefore taking exceptional measures. And we are going to win this war,” Prime Minister Manuel Valls wrote on Twitter.

In Paris and neighboring departments, the chief of police has banned all public gatherings until Thursday. Authorities have also forbidden the sale and use of fireworks and firecrackers, as well as the flying of drones over the Ile-de-France region.

Public transport was running normally on Sunday and schools and universities were set to reopen on Monday.

The Eiffel Tower switched off its lights on Saturday night in honor of the victims of the massacre. Museums and cultural institutions remained closed on Sunday.

France will lower its flags and hold a minute of silence at midday on Monday as part of a three-day period of national mourning. Reinforced checks are being conducted at road crossing points, rail stations, ports and airports.

These reinforcements come on top of the 30,000 policemen, gendarmes and soldiers that have been patrolling 5,000 sensitive locations across France as part of the Vigipirate security measures in force since January.