The spat comes amid growing strain on the logistics chain, as workers in sectors considered essential express concern about their safety.

PARIS — Amazon came under fire from the French government on Thursday for putting “unacceptable” pressure on its workers, as unions accused the online retail giant of failing to respect health and safety regulations in its warehouses in France amid a nationwide lockdown to battle the coronavirus epidemic.

Several-hundred Amazon workers have invoked their “right of withdrawal,” a provision in French labor law that allows workers to stay home if they think their workplace puts them in “grave and imminent” danger, as casualties from COVID-19 continue to mount. The law provides no blanket provision in the event of a pandemic.

In a joint letter, Amazon workers’ unions said the retailer had warned its employees that their pay would be docked if they failed to show up for work on the grounds of health concerns.

French Finance Minister Bruno Le Maire sharply criticized the retailer’s response. “These pressures are unacceptable and we will let Amazon know,” he said on France Inter radio on Thursday.

A spokesman for Amazon France declined to comment on the worker walkouts, but said the company was doing everything to comply with national and local health and safety directives. Amazon has pledged to keep paying employees who are quarantined because of a suspected case of COVID-19 and to facilitate taking days off.

“The health and safety of our employees remain our top priorities. We respect all the rights of our workers. We continue to adjust our processes by applying strictly the recommendations of the government and local health authorities and we assist our employees in adopting these new rules immediately,” Amazon France said.

Among the measures it has implemented are intensive cleaning of all its facilities worldwide, including the regular disinfecting of door handles, handrails, elevator buttons, lockers and touch screens; asking employees to clean and disinfect their work stations at the beginning and the end of each shift, and canceling all nonessential meetings until further notice.

Amazon said working areas, common rooms and canteens have been reconfigured to allow workers to keep a safe distance, and breaks have been staggered to avoid crowding.

The French labor unions called on Amazon to stop “threatening” staff. “Our job is to defend and enforce the rights of your workers,” the joint statement said. “Remember that nobody is above the law in our country!” They have demanded the closure of all Amazon logistics sites, except for the Saran center near Orléans.

While workers at Amazon logistics hubs in Italy have also staged walkouts on the same grounds, their British counterparts have yet to express similar concerns about health and safety.

“We have no reports of workers not turning up to work as with the French workers,” said a spokesperson for the GMB Union, which represents many Amazon U.K. staff. “However, there are workers who are self-isolating due to the onset of the virus.”

The French conflict has highlighted the growing strain on the logistics chain as France enters its third day of confinement, with employees in sectors considered essential, such as transport and food, expressing concern about their safety.

Speaking after a meeting of the French government’s “Task Force Economy,” President Emmanuel Macron called on companies to keep working, while ensuring health safety rules are respected. “In these times of crisis, the economic life of the nation must continue,” he said on Twitter.

Le Maire, while also stressing the importance of maintaining economic activity, called on employers to take the time to respond to staff concerns and adapt working conditions accordingly.

“It is essential to protect employees,” he said. “That is the utmost priority, and in order to achieve that, I would prefer for everyone in their companies, their factories and their stores to take the time to talk with the employees. If you need to take a half day or a full day to discuss with staff how to move forward, it will be time well spent.”

He said the government planned to issue guidelines for good conduct to help employers navigate the rapidly changing landscape, which has seen the closure of all nonessential businesses in France. Citizens have been asked to limit their movements to the bare minimum to help curb the COVID-19 outbreak, which has killed 264 people in France.

Le Maire said that as long as health and safety regulations are respected, there is no “grave and imminent” danger that would justify employees refusing to go to work.

“But I understand perfectly well the concerns of employees who are working outside their home. I understand and support their calls for clear and strict rules. They are right, and we won’t be able to overcome this epidemic and its economic consequences unless we all have better dialogue, show solidarity and define clear and strict rules that are respected by all,” he said.

Among those raising concerns about working conditions are letter carriers and supermarket checkout assistants.

“I don’t see why Amazon should be the only one to pick up that business, at the risk weakening bookstores,” he said.

France last year became the first major economy to impose a tax on Internet companies such as Google, Amazon, Facebook and Apple, prompting U.S. President Trump to threaten retaliatory duties on French wines, cosmetics and leather handbags. The two sides agreed in January to delay measures while they seek a solution to the spat.

Major online retailers have not reported any significant logistical hurdles as a result of the COVID-19 crisis. China’s JD.com said it has been delivering consistently throughout the epidemic.

“For the eighth consecutive year, JD kept to its promise to deliver to nearly 300 cities across the country during the Spring Festival. Our couriers are continuously working as usual,” it said. 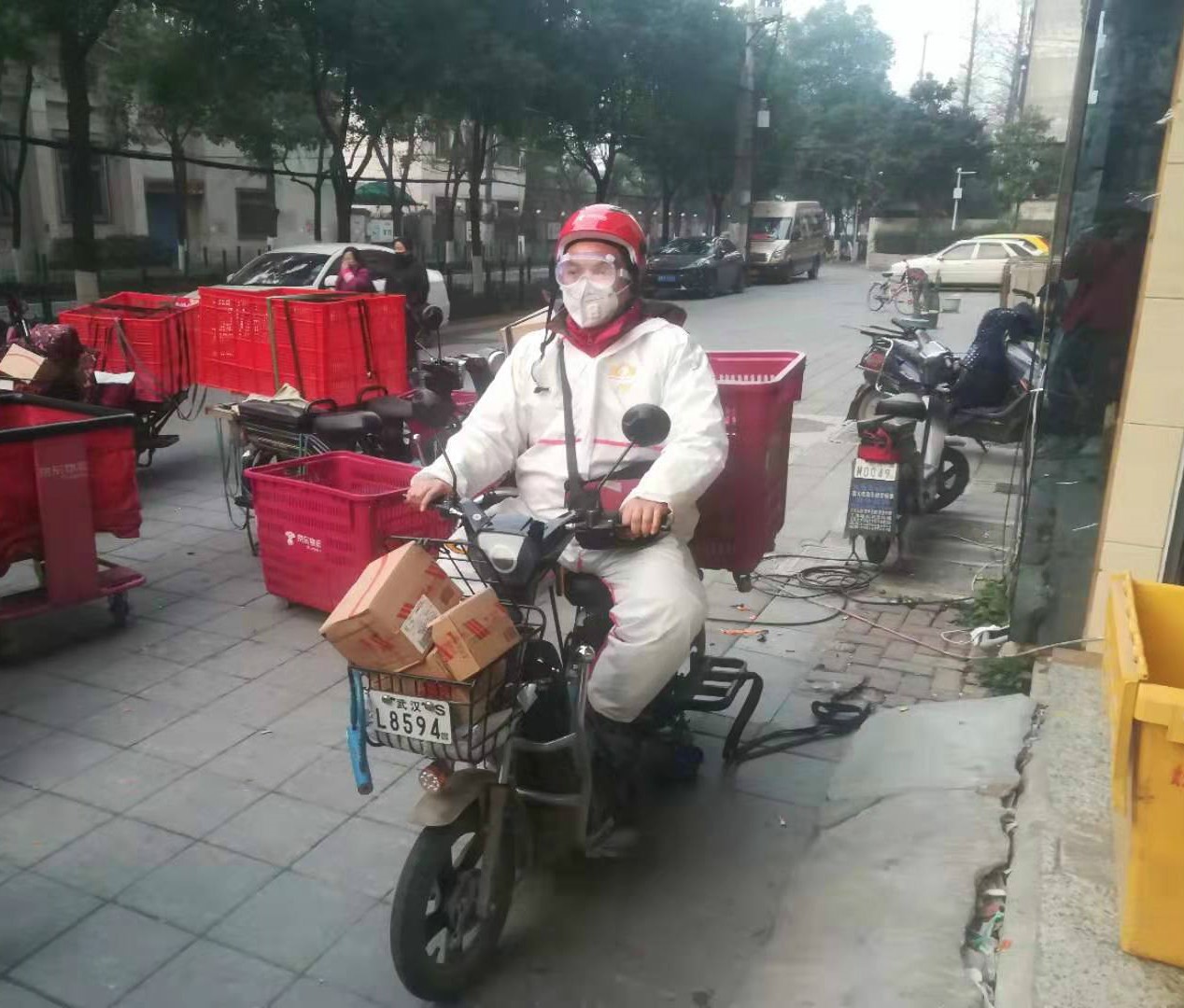 “Any couriers who have come from a place other than their current working location are required to complete home observation according to local policies before returning to work. For all couriers, we require daily temperature checks and masks to be worn at all times at work, and provide comprehensive protection supplies,” it added.

Matchesfashion.com said it was following guidance from the World Health Organization regarding health and hygiene practices at its warehouse.

“We are maintaining the very highest standards of hygiene within all of our physical locations and ensuring our people report for work only if they are fit and healthy. So far we haven’t been impacted and we have been able to continue operating a normal service everywhere, with the exception of Wuhan in China and Piacenza in Italy,” a spokeswoman said.

In a note to customers, Mytheresa.com also said it was business as usual.

“We take the recent developments very seriously and are operating in line with advice from the World Health Organization in our warehouse and all our other sites. This includes our suppliers of packaging, as well as our delivery partners. We continue to ship globally, and parcels will still be delivered in a timely manner. If any possible delays might occur with your order, you will be notified at checkout before placing the order,” it said.

However, resale site Vinted said it has temporarily suspended sales in order to prevent buyers and sellers from leaving the house to collect or send parcels. All existing orders have been suspended until further notice.

Germany’s Zalando said there were no recorded cases of COVID-19 at its warehouses or logistic locations run by its partners.

“All the logistics centers are operative and we have enhanced our precautionary and hygiene measures accordingly,” it said. However, it noted a decline in demand as drastic lockdown measures are extended across Europe.

“Driven by the increasing spread of the coronavirus across Europe and the mitigation measures by European governments, the circumstances under which we operate are currently changing on a daily basis. Until the lockdown in several countries, we had not seen a major impact on our business. Since the lockdown started, we noted a negative impact on our business in the form of lower consumer demand in affected areas,” Zalando said.

“We are monitoring the situation closely and we are focused on ensuring both employee safety as well as business continuity. At the same time, we are steering our business decisively in order to reduce the impact across all areas of the company,” it added.