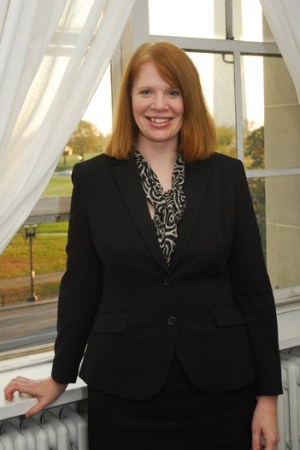 WASHINGTON — Kim Glas, the new chair of the interagency Committee for the Implementation of Textile Agreements and deputy assistant secretary of the Commerce Department’s Office of Textiles & Apparel, didn’t let any time pass before immersing herself in the inner workings of the industry she represents.

Since assuming her role with Commerce at the end of August, Glas has dedicated herself to reaching out to key stakeholders, and industry sources said she has “jumped in with both feet.” Glas said she’s been on an industry tour, visiting textile factories and research centers.

“It’s my job to be a strong advocate for the industry,” she said.

Prior to assuming her position with OTEXA, Glas accumulated a decade of experience on Capitol Hill working on trade and manufacturing issues. Most recently, she was the deputy chief of staff and legislative director for Rep. Mike Michaud (D., Maine). Glas served as the lead staffer for the House Trade Working Group, which Michaud cochairs. Prior to that, Glas worked for Rep. John LaFalce (D., N.Y.) before he retired.

Michaud is one of the leading proponents in Congress on changing U.S. trade policy, said Steve Lamar, executive vice president of the American Apparel & Footwear Association.

“[Glas] represents a pretty clear link back to that part of the trade debate, which is probably one of the assets she brings to the Commerce Department,” Lamar said.

Glas’ background gives her credibility to communicate how textile issues are seen in Congress and a helpful perspective for the Commerce Department on trade topics in general, said Cass Johnson, president of the National Council of Textile Organizations.

Glas said she sees the relationship between OTEXA and the industry as “an evolutionary process” that can adapt to reflect the shifting challenges of the times. With the economy still struggling, and textile and apparel import levels that have yet to rebound, the main priority of the Commerce Department is on economic recovery to help U.S. companies, she said.

“As long as the unemployment figures are high, and as far as the President is concerned they’re unacceptably high, our focus has to be on helping provide jobs,” Commerce Secretary Gary Locke said in an interview. “And what we in the Department of Commerce can do is help those companies be more efficient, more competitive, stronger, profitable.”

The economy is moving in the right direction, Locke said, which will improve consumer confidence and ultimately help spur retail sales and a recovery in textiles and apparel. Year-to-date textile and apparel imports to the U.S. are down 14.3 percent to $52.9 billion for the period ended in August, according to the most recent data available from the Commerce Department.

“There’s no doubt that the economic downturn has hit this industry hard,” Glas said. “We’ve seen significant job loss. In the past year, 55,000 jobs have been lost in the industry.”

Economic recovery efforts will continue to be the top priority at Commerce for now, Locke and Glas said. A focus on export promotion will be part of those efforts.

On other issues, like a controversial push by the domestic industry to reinstate monitoring of textile and apparel imports from China, the industry will have to wait. Glas said she has had many meetings with domestic industry representatives about the monitoring request, but thus far no decisions have been made either for or against the request.

“It’s an important issue, I understand the concerns,” Glas said. “In terms of the pathway forward, we haven’t quite established that yet. Talking about a China monitoring program, we have to consider how that fits into the overall framework on China trade policy moving forward.”

Glas said she has also heard from the domestic industry about concerns over continued sourcing shifts out of the Western Hemisphere, and the Central American Free Trade Agreement region in particular, to China.