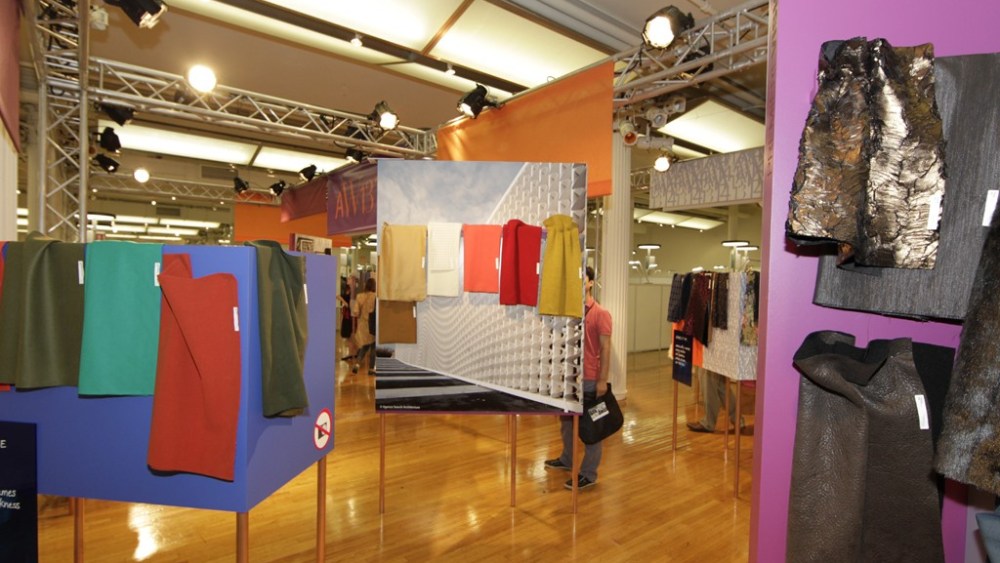 NEW YORK — Textile and apparel sourcing is reinventing itself once again.

As the global economic malaise continues, fashion brands are blazing new paths in the supply chain, including what firms say is an increasing emphasis on Made in America. Other key planks in the new sourcing structure include China Plus strategies, greater quality and innovation control, improved quick-response methods, risk-aversion management and increased emphasis on sustainability and green production processes.

These issues at the heart of the sector were in the spotlight at a series of major trade shows this month in Manhattan — Première Vision Preview, Spinexpo, Texworld USA and the International Apparel Sourcing Show.

Europe’s economic woes were central at PV Preview, where Philippe Pasquet, chief executive officer of Première Vision, said, “We have many newcomers and people returning after several seasons, mostly companies from Europe and Asia looking to invest more in the American market. The European market is tough right now, especially southern Europe. Companies are suffering a bit because of low demand in some countries, but they are willing to invest in new products. The U.S. market still has many question marks, but is better than the other mature markets, Europe and Japan.”

Pasquet added that while the euro-dollar currency exchange rate is helpful right now for European fabric firms looking to export, “it’s impossible to base an export strategy on the exchange rate, because we don’t know how it will be in the coming months. It’s so unpredictable.”

Ioana Banu, director of sales at Liberty Art Fabrics North America, showing at PV Preview, said, “Business has been growing so fast ever since we opened our own office,” referring to Liberty deciding to create a corporate office instead of agents to represent its fabric sales in the U.S. in spring 2011.

Banu said sales are coming mostly from key customers, because “we’ve been able to offer them the attention that they desperately wanted that an agent could not give,” adding that, “It doesn’t hurt that prints seem to be huge right now.” Liberty has developed a strong business with Nike in its footwear and apparel divisions, and has added four people to the New York staff in sales and customer service.

Karine Van Tassel, founder and organizer of Spinexpo, said exhibitors were not focused on any specific trend “but rather a more thorough research for reliable products and suppliers with a no-risk attitude and diversification in their choices.

“Cotton companies are doing well because the prices are getting back to normal as compared to last year,” Van Tassel said. “Woolens are still on trend, although U.S. buyers are not keen on hairy yarns or supercrisp and twisted products, but are looking for items that are comfortable and pleasant to the touch.”

A broad view of global sourcing could be found in the booths and seminars at Texworld and the Apparel Sourcing Show, from the 10 U.S. mills featured in the Lenzing Pavilion to the array of suppliers and mills from countries that included China, Turkey, South Korea, Spain, Taiwan and Mauritius.

Gail Strickler, assistant U.S. trade representative for textiles and apparel, noted in a panel discussion on “Sourcing Hot Spots” that “duty savings for U.S. free-trade agreements and trade preference programs can be significant and are important opportunities. These include the countries of the Central America Free Trade Agreement, North American Free Trade Agreement, Haiti, Peru, Colombia and the sub-Saharan countries of the African Growth & Opportunity Act.

“From a practical standpoint, we look at agreements like CAFTA and NAFTA — I think people forget that the U.S. is actually the third-largest exporter of yarns and fabrics in the world — as an extension of Made in America,” said Strickler. She added that when the Obama administration balances expanding international trade, such as the Trans-Pacific Partnership being negotiated now, with creating jobs at home, “we certainly do look at making sure that we figure out strategies that help us to preserve and create those opportunities. We know we’re not going to be the best at everything, but we know there are things that we’re really damn good at in this country, and we want to make sure that in creating these kinds of supply chains and networks that we offer manufacturers a globally competitive way to take advantage of that.”

As for a reinvigorated Made in America movement, Strickler said, “There is a certain amount of apparel we can and should be making in this country, because we can make it in a matter of days, giving us quick response and test-marketing abilities. We have yarn spinners in this country that have the most sophisticated equipment in the world and that are paying 4.4 cents per kilowatt hour of electricity. That’s globally competitive.”

Those U.S. yarn spinners and knitters said interest in more domestic manufacturing is high, and some new business is coming their way.

Brian Meck, president of Fessler USA, said, “We’re doing a lot of fabric development in response to our customers’ requests for new fabrics, new yarns and new constructions and finishes. As a U.S. manufacturer, it’s one of our advantages when people want things to replenish their lines and keep them updated and be innovative every season. We can handle that and turn that very quickly. When it goes back to just basic items, and focusing on making the same things over and over again, we’re not as competitive.”

Linda Corby, a sales representative for Texollini, a circular knitting mill specializing in stretch fabrics based in Long Beach, Calif., said the company’s business has been steady and the interest in Made in America is there, “but the big players have not committed yet.

“It’s just a matter of time before they enter the market, too,” Corby said. “It’s becoming a necessity, because people are finding it’s not as easy to do business in China anymore, and manufacturing in the U.S. can be done and it has its advantages.”

Brad Perry, a sales representative for Tuscarora Yarns, based in Mt. Pleasant, N.C., said the company is receiving a lot of inquiries from manufacturers that have not had a U.S. sourcing presence and are seriously exploring bringing some production back to the States. Perry said business is good with established accounts, and that exports, particularly to Central America, now account for about 75 percent of sales.

David Sasso, vice president of international sales at Buhler Quality Yarns Corp., said the revival of interest in Made in the USA “is definitely real, but the real question is: Is it sustainable and how will it evolve?” He noted that there is already a niche in sourcing for Made in the Americas, where goods are produced in places such as Central America, Mexico, Canada, Colombia and Peru, using U.S. yarns and fabrics.

Sasso added that the domestic industry has to be careful while it pursues increased business.

Beth Hofer, senior manager for customer relations and educational resources for the Stoll Fashion & Technology Center, a three-year-old facility the German machine manufacturer set up on West 39th Street in Manhattan, said, “The timing is right because we see people who have a vision come into our facility. We have new designers coming in and saying, ‘We want to make it here and support the industry here. We don’t want to make it over there.’ ”

Many acknowledged that even with all the talk of more firms producing in the U.S., China remains the largest supplier by far.

Rick Helfenbein, president of Luen Thai USA, which runs a Supply Chain City in China, said, “The reality is that a China Plus Two strategy” where China production is supplemented by two other key suppliers, “is probably what works today. In the last two years, China’s market share has just dipped a few percentage points. The exodus from China is just not happening for the time being. China might decline a little bit, but their productivity is so incredibly high. Until the productivity in the other countries in Asia, like Cambodia or Bangladesh, improves, China will continue to be the dominant player in global sourcing.”

An area that has consensus agreement is the growing acceptance of sustainable products and practices in the industry. Among the developments and products highlighted at the shows were:

• Italy’s Newlife launched its recycled polyester fiber in the U.S. Manufactured from postconsumer plastic bottles, the yarns are produced in Italy and certified for their sustainability factors by several agencies.

• Thermore, a Milan-based maker of thermal insulation for apparel with operations in Europe, the U.S. and Asia, presenting its new TMK line that features 50 percent post-consumer recycled polyester fibers, and its enhanced Rinnova product, with a content of 100 percent postconsumer recycled fibers. The company claims that each jacket made with Rinnova saves enough energy to power a compact fluorescent lightbulb for more than 200 hours.

• Kate Lewis, deputy program manager for the U.S. Department of Agriculture, gave a presentation on how companies like Lenzing and DuPont’s Sorona fiber can obtain certification as part of the USDA BioPreferred program that encourages government agencies and contractors to purchase products that are biobased or made from significant amounts of biobased materials.

• D. Craig White, head of retail and brand marketing in the Americas for apparel for Huntsman Textile Effects, explained the company’s enzyme-based Gentle Power Bleach that requires no sodium hydroxide, less water and less time. The peroxide bleach system allows for low temperature bleaching of textiles at 65 degrees Celcius, and at a neutral pH range. By lowering the treatment and rinsing temperature considerably, savings in water and energy consumption of up to 40 percent are possible, White noted.

• Meadowbrook Inventions, a Bernardsville, N.J.-based manufacturer of precision-cut particle colorants and sequins, demonstrating its Angelina Fibers that create luminescent effects not possible with metallic filament yarns. Roberta Ruschmann, an executive at the company, explained that Angelina fibers — optical and technical special effect fibers — are manufactured in many forms for a variety of applications.