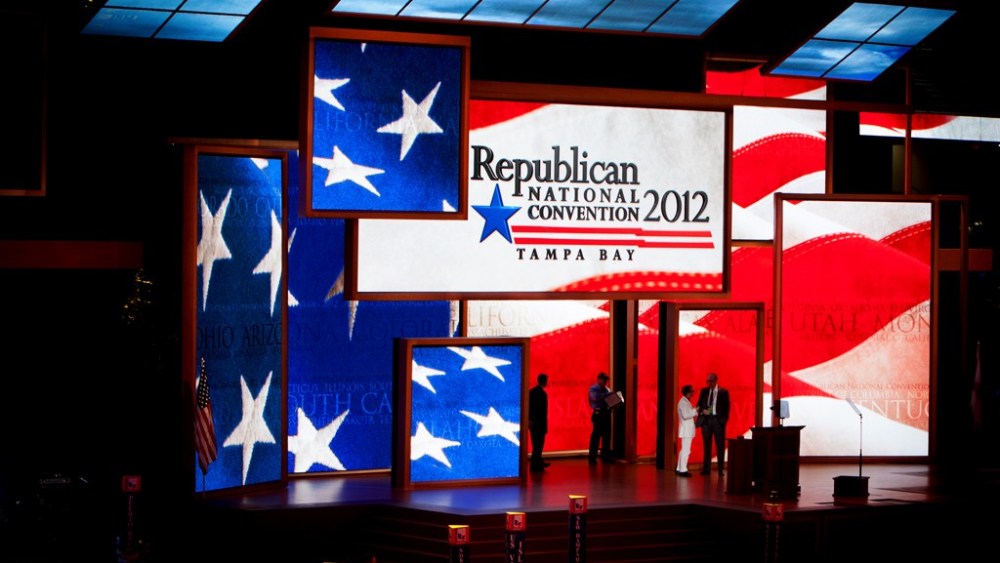 TAMPA — The Republicans want to get tough on China.

While the party platform adopted here Tuesday espouses the benefits of free trade, there appear to be limits when it comes to the world’s largest fashion and textiles manufacturer.

The platform, which constitutes a set of principles for a Republican president and was approved by delegates at the Tampa Bay Times Forum, placed a focus on cracking down on China’s currency manipulation — a plank more common in Democratic platforms — and theft of intellectual property.

“This worldwide explosion of trade has had a downside, however, as some governments have used a variety of unfair means to limit American access to their markets while stealing our designs, patents, brands, know-how and technology — the ‘intellectual property’ that drives innovation,” the platform stated. “The chief offender is China, which has built up its economy in part by piggybacking onto Western technological advances, manipulates its currency to the disadvantage of American exporters, excludes American products from government purchases, subsidizes Chinese companies to give them a commercial advantage and invents regulations and standards designed to keep out foreign competition.”

The China currency manipulation argument has bounced around Capitol Hill for several years and legislation aimed at punishing the Asian nation for the practice has passed in one chamber but stalled in the other. It was also a major issue raised by President Obama on the campaign trail four years ago.

Critics of China’s monetary policies claim the country keeps its currency artificially low, by as much as 40 percent, which in turn makes Chinese imports cheaper and puts U.S. manufacturers at a competitive disadvantage.

Mitt Romney, set to accept his party’s nomination on Thursday, has targeted China on the campaign trail, saying he would label China a currency manipulator his first day in the White House, which could ultimately lead to punitive tariffs being placed on Chinese imports. Romney has also criticized the Obama administration for not taking more aggressive steps to hold China accountable for its undervalued currency and the platform reflected that message — “The current administration’s way of dealing with all these violations of world trade standards has been a virtual surrender,” the platform said.

The Obama administration has prodded China to reform its currency practices through high-level dialogues, which have yielded some success, as China’s currency has appreciated somewhat. His administration has also filed several unfair trade cases against China at the World Trade Organization for tires, credit card companies and chemicals. Showing the political sensitivity of China trade relations, Obama has repeatedly declined to name China a currency manipulator, nor did his predecessor, George W. Bush.

Apparel firms that imported $101.5 billion in goods in the year ended June 30 and U.S. textile producers that have lost tens of thousands of jobs over the years have a lot at stake in the policies of the presidential candidates. For retailers and most U.S. fashion brands, getting tough on China would be a major headache since that is where they source the majority of their fashion products. For domestic manufacturers, the stance would be a welcome boost for the growing Made in America movement to revitalize U.S. manufacturing.

President Obama has struck a balanced approach to trade, combining trade negotiations in a Trans-Pacific Partnership agreement with a higher degree of trade enforcement activity against countries that violate trade rules. Romney has championed free trade, also supporting the TPP, but he has criticized Obama for failing to be more aggressive on China.

“We have quite a bit of mounting evidence to suggest that China doesn’t play by the rules. They are not held accountable,” said Sarah Pierce, senior vice president at the National Council of Textile Organizations. “This platform really reflects the fact that we have a candidate [Romney] interested in trying to hold China accountable. The other part of that debate is: ‘Can we as a country control the actions of another country?’ If we can’t, what are the measurable actions we can take? What we are seeing in this platform is really a candidate trying to lay out exactly what it is his administration will do to create accountability in this system of international trade.”

The platform also expressed support for free trade, including the conclusion of the 10-country TPP negotiations and the creation of a multilateral trade agreement, dubbed a “Reagan Economic Zone.”

“Obviously, what is positive about the platform is the support of trade promotion authority [that allows the president to negotiate trade agreements with countries and submit them to Congress for an up or down vote without amendment] and for the conclusion of the TPP negotiations,” said Julia Hughes, president of the U.S. Association of Importers of Textiles & Apparel.

Hughes said she would have liked to have seen more details about the Republican’s position on TPP.

“There are a lot of unresolved issues relating to TPP and it would have been good to get insight into what the Republican party’s position is on that,” she said.

As for the platform’s stance on China, Hughes said: “I don’t think people should read too much into the fact that the platform takes such a hard line. It raises some concern, but I think there are many platform points that never see the light of day once a candidate is in office.”

“I welcomed the first section of the platform that said international trade is crucial to our economy,” Lester said. “I welcome the very direct and specific recognition of that. It sets the tone for the rest of the platform and I think that is generally very good.”

In the area of regulations, the platform took a strong stance, echoing much of what Romney has said on the campaign trail.

“Many regulations are necessary, like those which ensure the safety of food and medicine, especially from overseas,” it stated. “But no peril justifies the regulatory impact of Obamacare [health care reform legislation] on the practice of medicine, the Dodd-Frank Act on financial services or the EPA’s and OSHA’s overreaching regulation agenda. A Republican Congress and president will repeal the first and second, and rein in the third. We support a sunset requirement to force reconsideration of out-of-date regulations, and we endorse pending legislation to require congressional approval for all new major and costly regulations.”

Lester said of the section on regulations: “Retailers welcome the call in the GOP platform for smarter regulation and we urge the drafters of the Democratic platform to do the same. Costly, unnecessary and often redundant regulations bind the hands of employers and make it more difficult to grow and create jobs. Atop the list of regulatory burdens challenging retailers today are decisions from the [National Labor Relations Board] that undermine worker and employer flexibility and the implementation of the Affordable Care Act.”