Pacific Place mall ceased operations while many businesses reduced their working hours or shut in solidarity with the protest.

Tens of thousands of protesters descended onto Hong Kong’s business district of Admiralty Wednesday morning to protest an extradition law, blocking major roads and prompting numerous businesses to close or work on flexible hours, in large-scale actions not seen since the 2014 Occupy pro-democracy protests.

By the afternoon, police had deployed tear gas and rubber bullets to control what police chief Stephen Lo deemed a “riot situation.” The crowds braved the occasional rain to gather outside the city’s legislative council building, following a march earlier on Sunday in which organizers said one million people took part — equal to one in seven people in the city — to express their dismay over a bill that would allow for an extradition agreement between Hong Kong and Mainland China.

The Swire Properties-owned Pacific Place mall, which is located just on top of the closest subway station to the rally area, became flooded with protesters, most of whom had dressed in black. A Swire spokesman confirmed that all mall tenants had ceased operations. “However, exits at Pacific Place, including the carpark exit, remain open to allow visitors” to pass through the premises to transport links. The two rallies this week stand to impact overall tourist sentiment and visitation to Hong Kong. 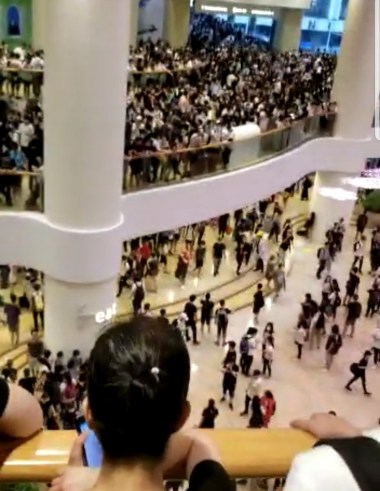 A screenshot from a video showing crowds of protesters streaming into Pacific Place mall.  Screenshot

Multiple major corporations permitted flexible working arrangements so that employees could attend the protest, including HSBC, Citibank, Standard Chartered and the big four accounting firms, local media reported, while at other companies including Adidas and Lane Crawford, many staff did not show up for work. Still other businesses have closed specifically in solidarity with the protest under the hashtag “#612strike,” in reference to today’s date. 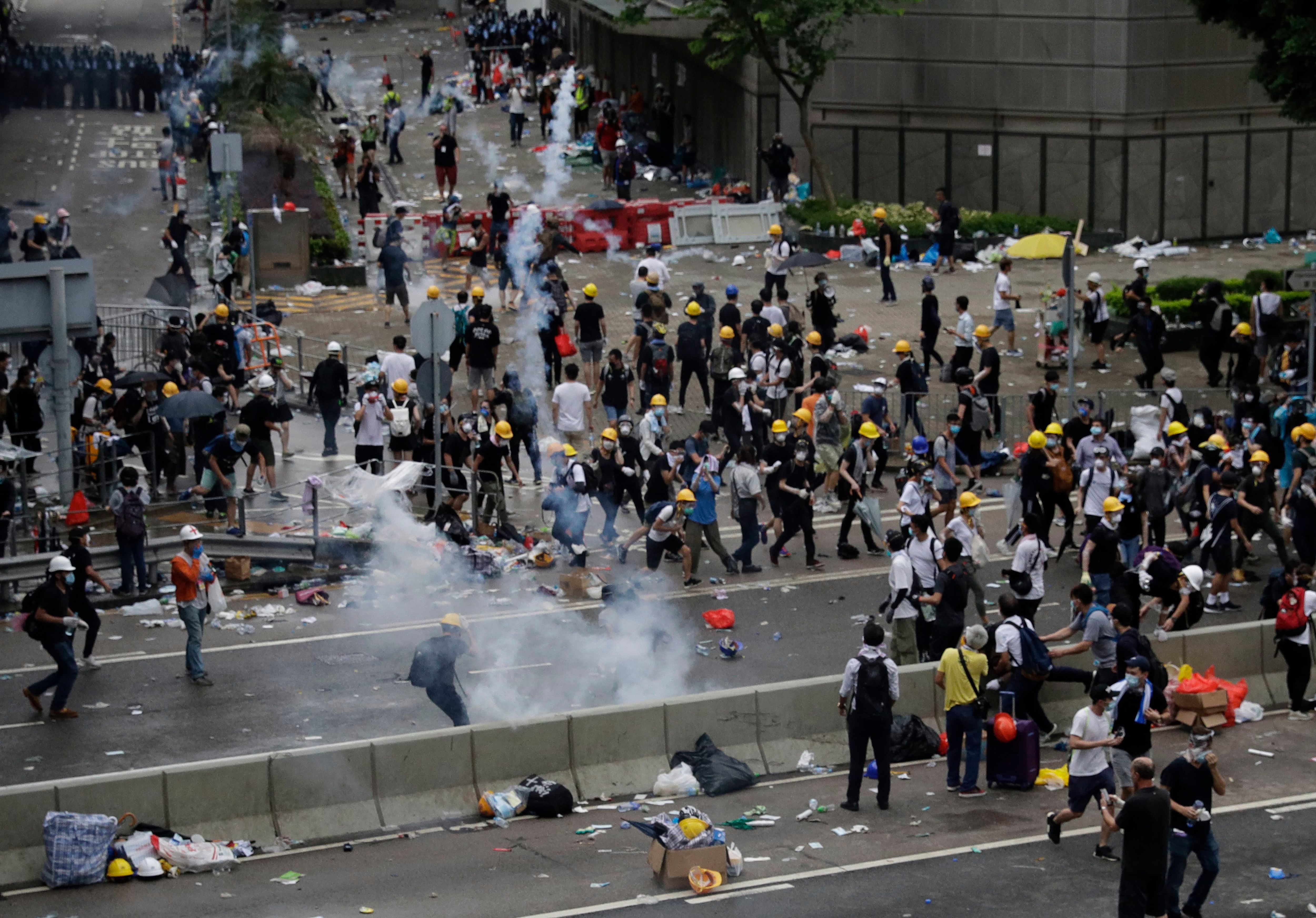 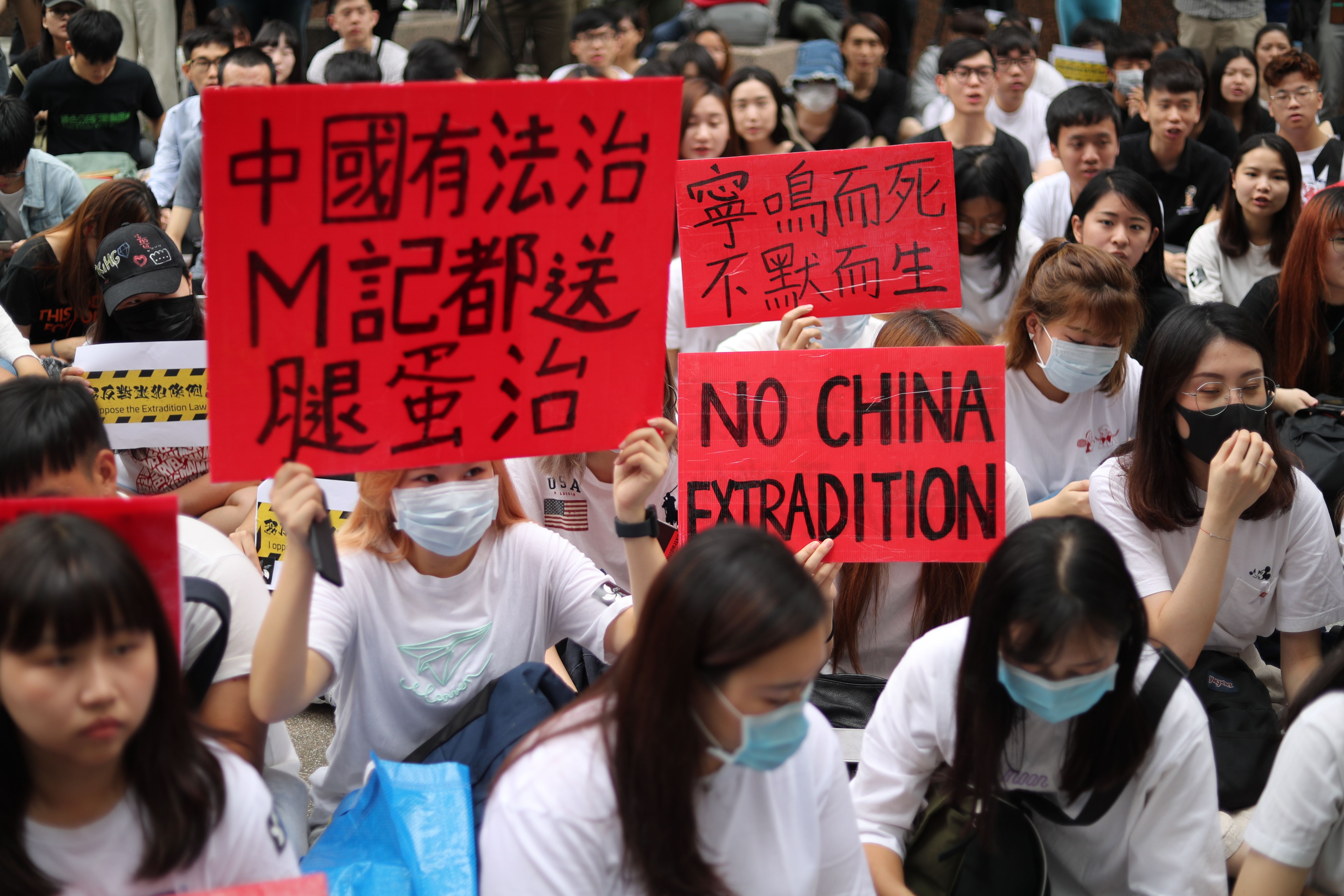 Demonstrators fear that the extraditions could be a tool for Beijing to target political dissenters in the semiautonomous city, further eroding civil freedoms.  RITCHIE B TONGO/EPA-EFE/Shutterstock 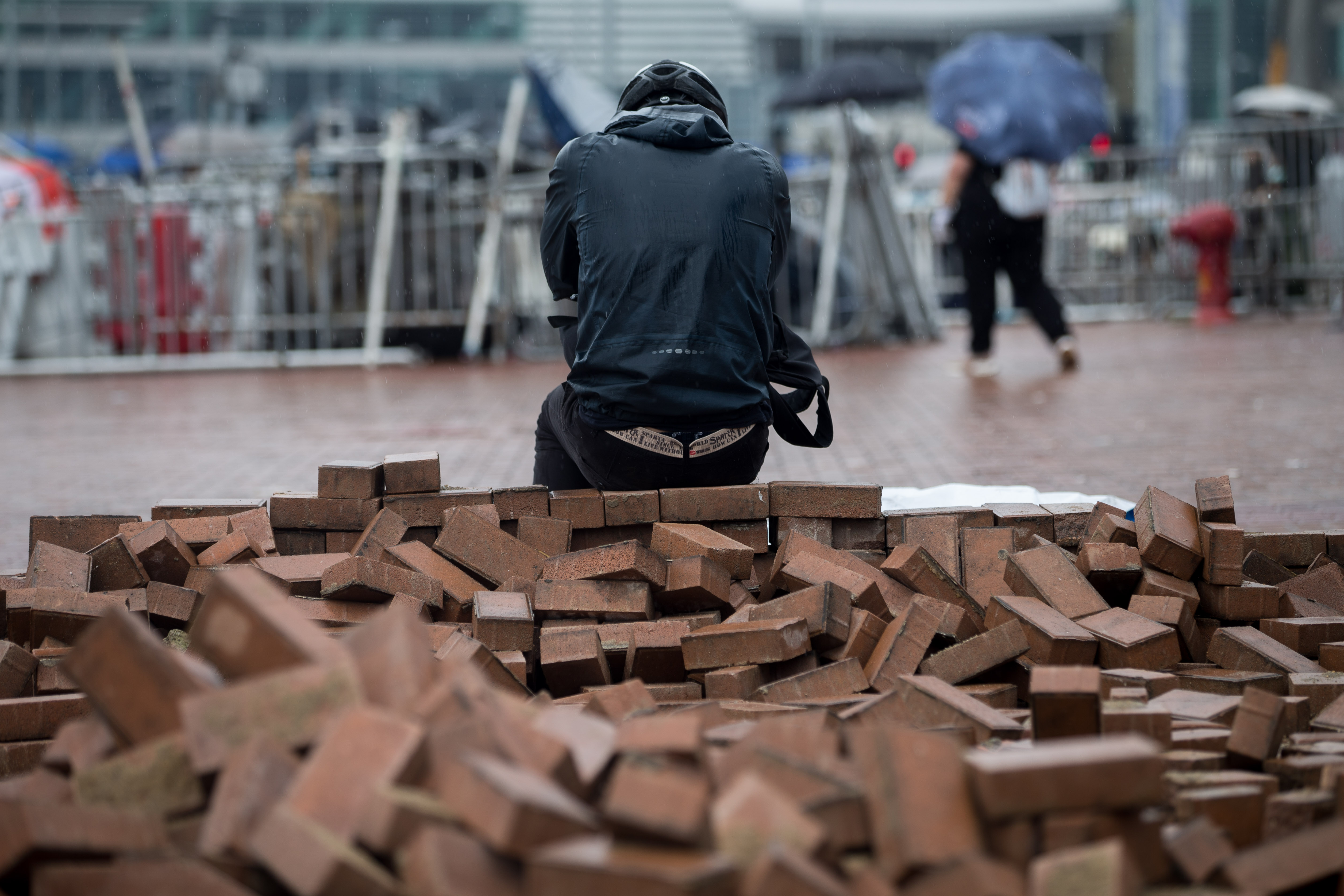 A man rests on a pile of bricks gathered by protesters.  JEROME FAVRE/EPA-EFE/Shutterstock 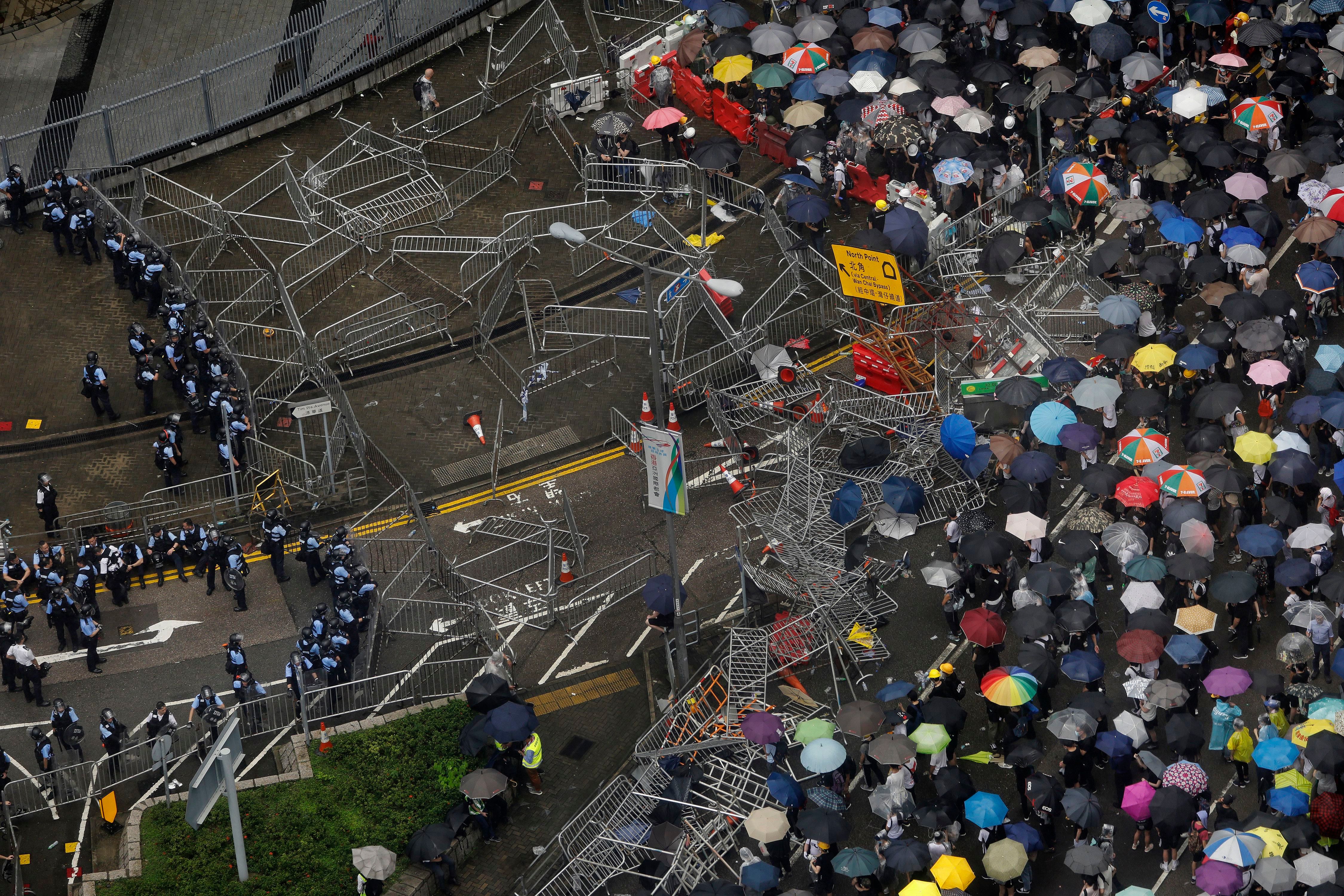 Protesters braved the rain and built barricades, facing off against police.  Vincent Yu/AP/Shutterstock

Demonstrators say the proposed legislation would give Beijing leverage to target political dissenters and is the latest erosion of civil freedoms in the special territory, which was promised a degree of political autonomy until 2047 due to its former status as a British colony.

Public anger has been rising over incidents including in late April, when the city handed down jail sentences for leaders of the Occupy protests and, last September, when Mainland Chinese officials began operating on Hong Kong territory at the West Kowloon high-speed rail station that links the city to the mainland, all viewed by protesters as examples of Beijing’s tightening grip.

Some protesters dug up bricks from the road in preparation for clashes with authorities. Multiple countries have issued travel alerts for Hong Kong including Australia, the U.K., Singapore and Thailand warning of large gatherings turning violent. 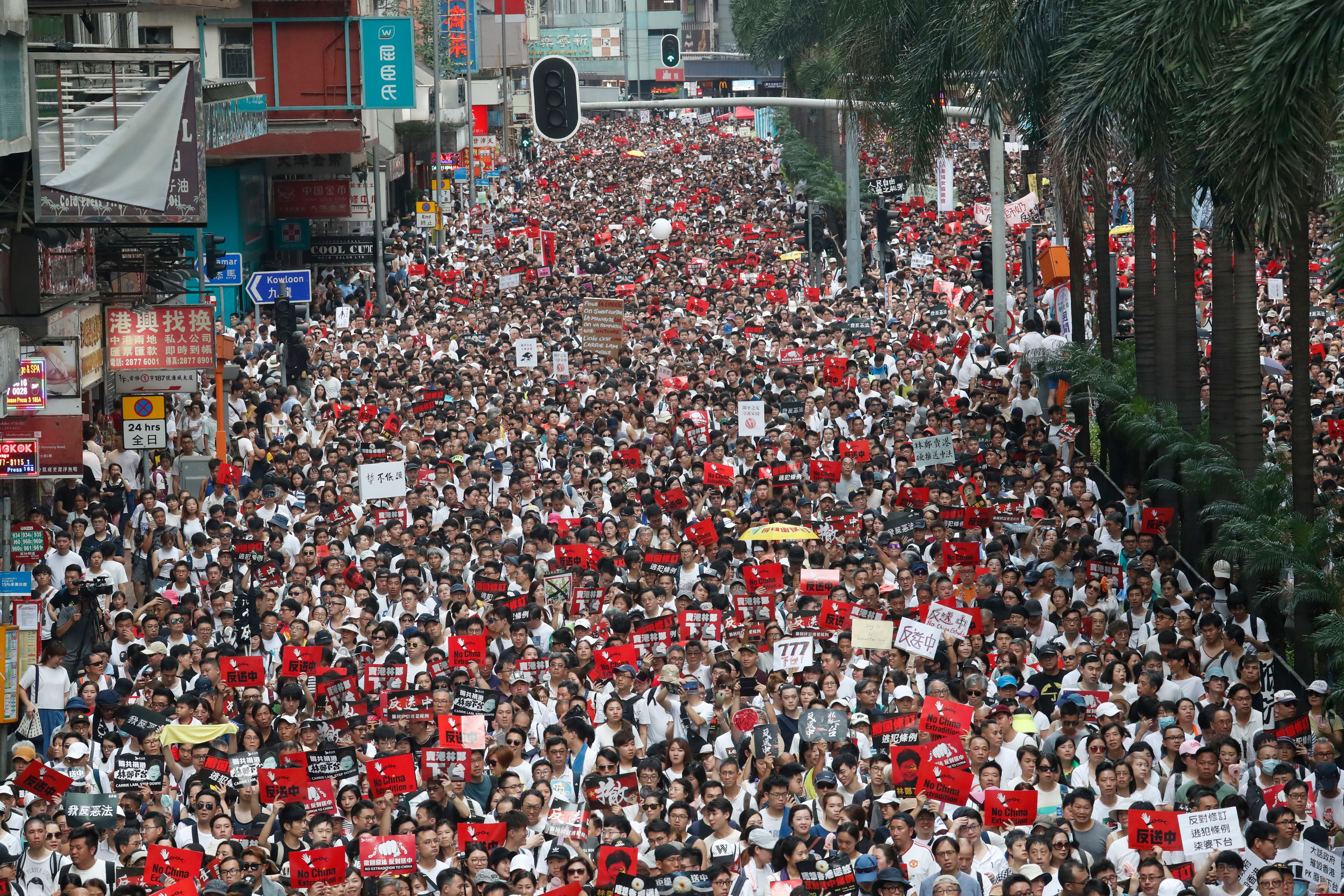