By Payal Uttam and Ellen Sheng on September 29, 2014
View Slideshow 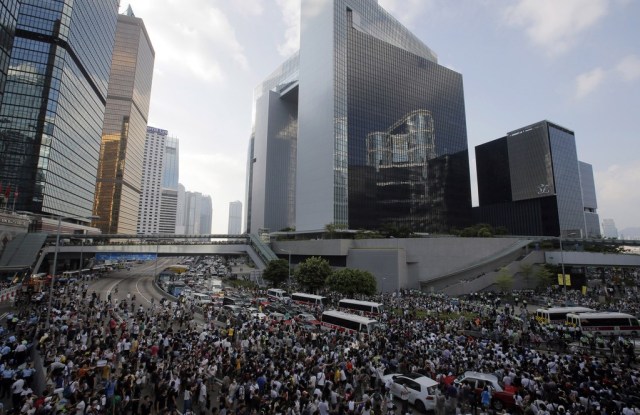 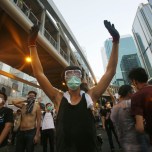 HONG KONG — Increasing civil unrest in Hong Kong is likely to dent retail sales and scare off Chinese tourists, heaping further pressure on retailers which are already grappling with a protracted slowdown in sales.

This story first appeared in the September 30, 2014 issue of WWD. Subscribe Today.

Central Hong Kong descended into chaos on Sunday as pro-democracy protesters converged on barricades as hundreds of police cordoned off streets and walkways and tensions flared amid the arrest of several lawmakers. Police used tear gas to disperse demonstrators.

The protests happen to coincide with this week’s National Day holidays — a key shopping season. Mainland Chinese travelers are likely to avoid the city due to planned protests in the city. Downward pressure on retail spending could persist in the former British colony despite signs of a modest rebound. Retail sales in August rose 3.4 percent from a year earlier, in value terms, reversing six months of decline, helped by improved spending on jewelry, watches, gifts and an earlier start to the Mid-Autumn Festival this year, the government said on Monday. At least three economists had expected a slight fall.

Hong Kong activists are expected to lock down the heart of the financial center on Wednesday, part of a civil disobedience movement that some fear will hurt the city’s competitiveness and business environment. At the heart of their demands is the right for Hong Kong people to choose the city’s next leader, rather than a leader pre-selected by Beijing.

Demonstrators are demanding democracy in a series of protests that will culminate in an “Occupy Central” blockade of the financial district on Wednesday, the start of China’s long holiday.

“We expect the battleground atmosphere on Hong Kong’s streets to add to the drag on retail sales in September,” Tim Condon, head of Asia research at ING Group in Singapore, said in a note Monday morning.

Caroline Mak, chairman of the Hong Kong Retail Retail Management Association said Monday it was too soon to make a sales forecast for this week’s holiday season.

Douglas Young, founder and chief executive of Hong Kong novelty and home goods shop Goods of Desire (G.O.D.) noticed that traffic was slow in the brand’s central outlets. If situation gets worse and spreads, he fears sales will be affected.

“There is an underlying anti-mainland sentiment behind the protest and this will put off mainland visitors. It’s beginning to show,” he said. “Tourists will think Hong Kong is not the peaceful haven it once was.”

Several jewelry shops in Mong Kok and Lockhart Road in Wan Chai were shut Monday. Some retailers in the Central district such as Joyce and Club Monaco remained closed for the morning only opening their doors at 1pm. While most shops in Pacific Place mall and Lab Concept were open Monday, some were either closed or adjusted their opening hours. Meanwhile for other shops in Central near the outdoor escalator, it was business as usual.

“Today’s press events and opening party have been postponed. The political climate is not right, and the new store location is at Lab Concept in Admiralty. We will officially open the store, and celebrate it, when the time is right,” an Urban Outfitters Hong Kong spokeswoman said.

Companies said they are watching the situation as it evolves.

“Coach has been closely monitoring the situation, with the safety of our customers and staff of paramount importance.  We have already activated our contingency plans designed to manage various scenarios across different locations. Two stores were closed in Central and Admiralty today in view of safety considerations, while the rest of our stores in Hong Kong remain open. Our team will continue to monitor and assess the situation as it continues to develop, and will act promptly in response to any changes,” a Coach spokeswoman said.

A spokeswoman for Giorgio Armani said the brand’s stores in Central and Pacific Place remained open Monday but warned that diversions of public transport could affect traffic.

A spokeswoman for Lane Crawford Joyce Group said the company is doing everything in its “capacity not to compromise the customer experience and quality of service during this time” but will close stores if necessary to ensure the safety of customers and employees. Lane Crawford’s home store in Pacific Place closed Monday morning but opened later in the day.

Hong Kong-based fashion designer Erbert Chong said he is waiting to see what happens before he makes a decision on whether to still hold his spring-summer runway show at Mott 32, a restaurant in Central, on Oct. 15 as scheduled.

“We want to wait out this week to see how it will go. It’s quite complicated now. I support the Hong Kong people on this. We do have to wait it out this week. If things are not resolved we will postpone the show. It’s partly because of solidarity and because the event is right in the middle of Central,” he said.

Other retailers downplayed the impact of the protests on their businesses.   “Sales are the same here. There are more problems in Admiralty and Causeway Bay,” said Paul Tang of Fox Optical Co., a local eyewear retailer with a store near the escalator in Central.   Similarly, Sun Hung Kai Properties, which manages a portfolio of 20 shopping malls in Hong Kong, including IFC in Central, said it does not yet have feedback from its tenants.

“Most of the shopping malls are not located in the regions that the protests are taking place. Also, the protests just started yesterday so at this moment we don’t have any comments from the tenants,” said Shirley Li, Sun Hung Kai’s assistant general manager of leasing. “Most of our shopping malls are in the new territories, not traditional commercial districts, so they’re not so sensitive to these kinds of happenings.

Jeweler Chow Tai Fook took a similar view of the protests. “If our shops in Central are affected, we will consider shortening operation hours as a measure to ensure the safety of our staff and customers and to avoid losses to the shops,” a company spokeswoman from Chow Tai Fook Jewelry said. “We, however, believe there will not be much negative impact on our business as customers can go to our shops in other locations.”

Already hurt by Beijing’s anti-corruption campaign, which has led Chinese visitors to tighten lavish spending in the city renowned as a shoppers’ paradise, Hong Kong businesses are also facing a slide in the number of tour groups.

Added to which, those who traipse across the border each day are now more interested in basic household products and infant milk formula than luxury handbags and high-end fashion, data shows.

Travel agents said the number of Chinese tours has dropped by up to 30 percent, boding ill for the busy Golden Week holiday that starts on Oct. 1, usually a busy period that retailers rely on for a boost to their sales.

“For overseas tourists, they don’t understand much about Occupy Central, but they are concerned if there will be any riots or large-scale rally, and they worry about the refund policy if there is unrest,” said Paul Leung, chairman of The Hong Kong Inbound Travel Association, referring to refunds on tours.

It was not surprising to see a 20-30 percent drop in the number of Chinese tours, he said, adding that the size of the groups had also dropped to 20 to 30 people from about 40 in the past.  China’s slowing economic growth has been a negative factor for luxury goods makers and Hong Kong retail-related stocks have been sold off lately on weak consumer sentiment and uncertainties due to the civil unrest.

Prada SpA’s Hong Kong-listed shares have fallen to their lowest level in 26 months.  ”Social, political tension is clearly driving a few people away because obviously you have a lot of different options. If you’re a wealthy Chinese individual, the likelihood is that you’ve been to Hong Kong two or three times already and you’ll have more welcoming places to go to,” said Erwan Rambourg, who researches luxury and sporting goods research at HSBC.

South Korea and Japan were among the top options, he said.  Hong Kong’s retail sector relies heavily on mainland Chinese visitors, who contributed around one-third of the city’s retail sales in 2013, according to Credit Suisse.

Prospects are not looking up yet, as demand for luxury goods continues to slide while spending by locals remains sluggish.

In a note published late Monday, Luca Solca, managing director and sector head of global luxury goods, said luxury companies are highly exposed to Hong Kong, and further escalation of the turmoil brings more downside to the sector against a backdrop of slowing sales.

Solca wrote that a scenario of further deterioration of social and political tensions in Hong Kong would usher more downside to the sector. “We should go back to 2003 SARS operating deleverage and multiple compression to fully grasp the potential deterioration,” he suggested.

Reuters contributed to this report.