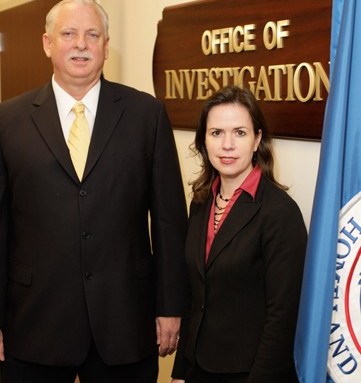 The global reach of coun-terfeiters and the accelerating speed at which they work means that the federal enforcement agencies must form a stronger partnership with the intellectual property industry, a top U.S. security official said.

Julie Myers, assistant secretary of Homeland Security for Immigration and Customs Enforcement, touted that message in New York last week. She was in the city to meet with members of the International AntiCounterfeiting Coalition, a multi-industry intellectual property protection group. Joined by the group’s president, Robert Barchiesi, Myers spoke with reporters about the state of the counterfeiting business and her agency’s efforts to combat it.

Sitting near a display of seized fake merchandise, including Coach handbags, True Religion jeans, Marlboro cigarette cartons and other bogus merchandise, Myers said the multibillion-dollar global counterfeiting industry is responsible for the loss of as many as 750,000 jobs in the U.S. each year.

Much of the actual counterfeiting, however, takes place outside the U.S., a point Myers made in discussing the need for more assistance from foreign governments. She said China and the “tri-border” region between Argentina, Paraguay and Brazil were particular areas of concern.

“In some places, there aren’t the laws on the books, and in other cases, they’re not enforced,” she said. “The profit is very high and the criminal penalties might not be as strict…. There’s still more work to do. Are we seeing places where more cooperation is needed? Yes.”

Myers said much of the profit from counterfeiting goes to organized crime and it was possible that some of the money could be funding terror networks.

The FBI has estimated that organized crime accounts for as much as $30 billion in retail losses every year.

Both Myers and Barchiesi spoke of the role technology is playing in counterfeiting operations. The time between the debut of a new designer bag and the arrival of fakes on the street is growing shorter, Myers said.

In addition, the distribution channels for phony merchandise have grown larger. Calling it a “virtual warehouse,” Myers said the Internet offers sellers a relatively anonymous way to push their products.

Barchiesi added that counterfeit goods aren’t just for sale on fly-by-night Web sites: “Auction sites need to assist and do more to police their own site.”

The federal government has devoted a veritable alphabet soup of agencies — including the FBI, the Food and Drug Administration, Commerce Department, U.S. Postal Service and Customs — to police both Web and counterfeit street sales. The National Intellectual Property Rights Center, a division of Immigration and Customs Enforcement, was created in 2000 to coordinate such cross-agency efforts. It is now a “one-stop shop” for industry tips and advice, Myers said.

The International AntiCounterfeiting Coalition also is working to combat fakes on the buyer end. Barchiesi spoke of a recent ad campaign designed to inform consumers about where a lot of counterfeit goods come from.

“In many cases, these are produced by forced labor or in sweatshops,” he said. “We can get to the consumers and say, ‘Listen, the $5 you just spent, you don’t want to think about where it went.’”