New York Gov. Eliot Spitzer, who resigned Wednesday, was well-known to the apparel industry from his career as an assistant district attorney breaking up a...

By Rosemary Feitelberg and Arthur Friedman on March 13, 2008
View Slideshow 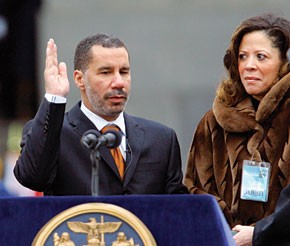 New York Gov. Eliot Spitzer, who resigned Wednesday, was well-known to the apparel industry from his career as an assistant district attorney breaking up a Mafia-run trucking cartel. Now the industry is hoping to get to know the next governor, David Paterson, a little better.

“David is a person who has a broad view of what makes New York City tick and a broad view of the industries in New York such as tourism and fashion,” said Lloyd Williams, president and chief executive officer of the Harlem Chamber of Commerce. “He understands the connecting point of those industries to jobs and training. I would certainly expect David to be a key person working with the apparel industry.”

Paterson’s wife Michelle, an HIP executive, is certain to take a leadership role in the fashion sector too, Williams said. “She is first-class — a nice human being and stylish. If you look at David, he is, too. His father was a natty dresser. The fashion flair is with them. I would think they will take a stronger and more supportive role with the fashion industry.”

Paterson has served as chairperson of the annual Harlem En Vogue fashion event, and has been a sponsor and active participant of A Great Day in Harlem, which caps off with a fashion show at the General Grant National Memorial.

Lenn Shebar, co-owner of N, a Harlem specialty store, was raised in the neighborhood with Paterson and is a fellow member of the men’s civic association 100 Black Men. Shebar and co-owners Larry Ortiz and Nikoa Evans hosted a fund-raiser at the store for Paterson’s campaign in September 2006.

“He is a very personable, decent guy who is always on the right side of the issue. He is also a visible presence in Harlem, whether it be for a block party or fighting for tenants’ rights at a Community Board 9 meeting,” Shebar said.

Paterson’s wife, an N shopper, favors Byron Lars, Hugo Boss and Nicole Miller. “She has a wonderful sense of style. She has placed some special orders with us,” Shebar said.

Meanwhile, the industry was still coming to grips with the prostitute scandal surrounding Spitzer. Known for his aggressive, hard-hitting ways, he is best known by apparel executives for breaking up a Mafia-run trucking cartel in the Garment District in 1992 — a move that would be one of Spitzer’s stepping stones to becoming governor. He successfully prosecuted mobsters Thomas and Joseph Gambino for illegally controlling garment industry trucking. During his opening statements to the jury in State Supreme Court on Feb. 5, 1992, Spitzer said the Gambinos and their associates resorted to an occasional show of force “where the velvet glove comes off.”

Spitzer went on to become the state’s attorney general, where he crusaded against corporate corruption. As governor, Spitzer had little contact with the fashion industry, unlike predecessor George Pataki, who joined with then-New York Mayor Rudolph Giuliani to try to promote the industry, including support for establishing Seventh on Sixth and the Bryant Park tents.

Bud Konheim, president and ceo of Nicole Miller, said he first met Spitzer when he was an assistant district attorney investigating the Mafia. Needless to say, he was stunned by the scandal surrounding Spitzer. “I couldn’t believe it. I knew the guy to be an incredibly straight shooter and someone who came across as squeaky clean,” Konheim said. “Nothing would have led me to believe he would have done something like this. I knew him to be rough and tough with the bad guys. This reminds me of the guys who go to Scores to whoop it up.”

But Barbara Randall, executive director of the Fashion Center Business Improvement District, who welcomed Spitzer at a Fashion Center BID photo op last fall at the Port Authority Bus Terminal, found him to be “lovely, charming and engaging.”

Allan Ellinger, senior managing partner at Marketing Management Group Inc. and chairman of Fashion Delivers, who arranged for Spitzer to be the keynote speaker last fall at the KIDS/Fashion Delivers gala in November, said he too was still shocked.

At last fall’s event, Spitzer made light of the controversy surrounding his plan to give driver’s licenses to illegal immigrants, which has been withdrawn.

Spitzer and Ellinger initially met by happenstance while vacationing at the same Puerto Rican resort three years ago. “We wound up in the same swimming pool at the same time,” Ellinger said. “I found him to be very warm, engaging and exceptionally bright.”

After having a few more conversations during their trip, Ellinger later called the then-attorney general in his office to discuss chargebacks and other retail-vendor concerns. Ellinger had hoped the discussion would continue. “He was kind of a tell-it-as-it-is, in-your-face kind of guy. I was really impressed,” he said.

As for New York State’s outgoing first lady, Silda Wall Spitzer, she appeared by her husband’s side Wednesday wearing a navy suit and a print scarf — even though she has admitted to WWD that she’s not a fashion fan. In January 2006, as she was about to become New York’s first lady, she said, “I’m not a good fashionista. I like clothing that looks nice and enjoy wearing things that look nice, but it’s really not something I would say I’m an expert in by any stretch of the imagination. It’s not been my focus. But I do enjoy clothing that looks nice, that’s comfortable.”

Reached Wednesday, designer Neil Bieff, who suited up the first lady for the inauguration, was trying to remain impartial. “I was a bit surprised to say the least and was a little distraught for Mrs. Spitzer. I just feel bad about the whole thing. I don’t want to judge it. In reality, I don’t think it has anything to do with governing,” he said.