International Exchange: Gen Z ‘Not Predictable’ Even In Kyrgyz Republic

A model in the Canyon "Fairy Tale", taken in August 2018. Coast of Issykul Lake. Kyrgyzstan.

Through the International Visitor Leadership Program of the U.S. Department of State, four women entrepreneurs from Kyrgyzstan (officially known as the Kyrgyz Republic) made their sweep to U.S. cities and territories such as Akron, Santa Fe, New York, as well as Washington, D.C. — to learn how women entrepreneurs and women-owned enterprises are supported for success.

As a Central Asian country with a relatively small population, under 10 million according to The World Bank, the Kyrgyz Republic boasts ample arable land yet efficiency at scale is still being pursued. And with that, as the women showed, pursuing their own business endeavors was crucial to their development. 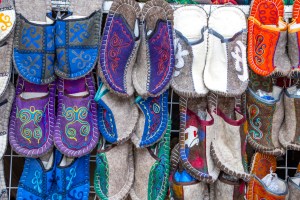 On their impressions walking into the WWD offices, Dzhamalova compared it to a movie, later assuming that, “Fashion seems to be women-dominated” in the U.S. Before her current role, she worked as a journalist for five years. From her experiences, Dzhamalova attributes an equal representation of men and women in the financial services sectors in the Kyrgyz Republic, but finds that women lead sectors such as apparel, education and some service sectors.

Beknazarova, in likeness to how fashion and beauty brands in the U.S. have widened purchase opportunity through social media, has leveraged Instagram and Facebook to sell her clothing designs, which are more national fashion. Despite the shared global connectivity and access, e-commerce growth, at least in the U.S., is stalling according to FTI Consulting which cited year-over-year online retail growth has slowed for four consecutive quarters. While direct-to-consumer brands reign the wallets of U.S. consumers, the women found “local designers” to be growing in importance for the “very fashionable” Kyrgyz women, “including those in the provinces.”

Regardless of country of origin, “Gen Z is not predictable,” as Dzhamalova said, and the other women agreed.