‘Leicester Is the Tip of the Iceberg,’ Says Labour Behind the Label

Meg Lewis, campaigns manager at Labour Behind the Label, a charity organization that lobbies on behalf of garment workers, talks about the Boohoo scandal and factory conditions in Leicester, England.

Labour Behind the Label protesting in front of an H&M store.

Photo Courtesy of Labour Behind the Label

LONDON — Earlier this summer, when the media and financial analysts were reporting on Boohoo’s successes — robust sales during lockdown, a fresh pile of cash on the balance sheet, the acquisition of high-street rivals Warehouse and Oasis’ online businesses — the Labour Behind the Label charity was preparing a blockbuster report of its own on the fast-fashion retailer.

Instead of trumpeting Boohoo’s wins, the report, “Boohoo and COVID-19: The People Behind the Profits,” talked about labor conditions in the online retailer’s Leicester, England, factories, and accused the company of putting workers at risk of coronavirus infections and fatalities. The city of Leicester remains in local lockdown, due to its stubbornly high number of COVID-19 cases.

The report called out Leicester’s factories generally, saying they paid low wages — as little as 3 pounds an hour, less than half of the national minimum wage — and accused them of “blatant intimidation” of vulnerable workers, many of whom are poor South Asian or Eastern European immigrants.

Not long after the report came out, The Sunday Times of London went undercover at one of Boohoo’s factories, Jaswal Fashions, and its own story shed light on appalling working conditions and low wages. 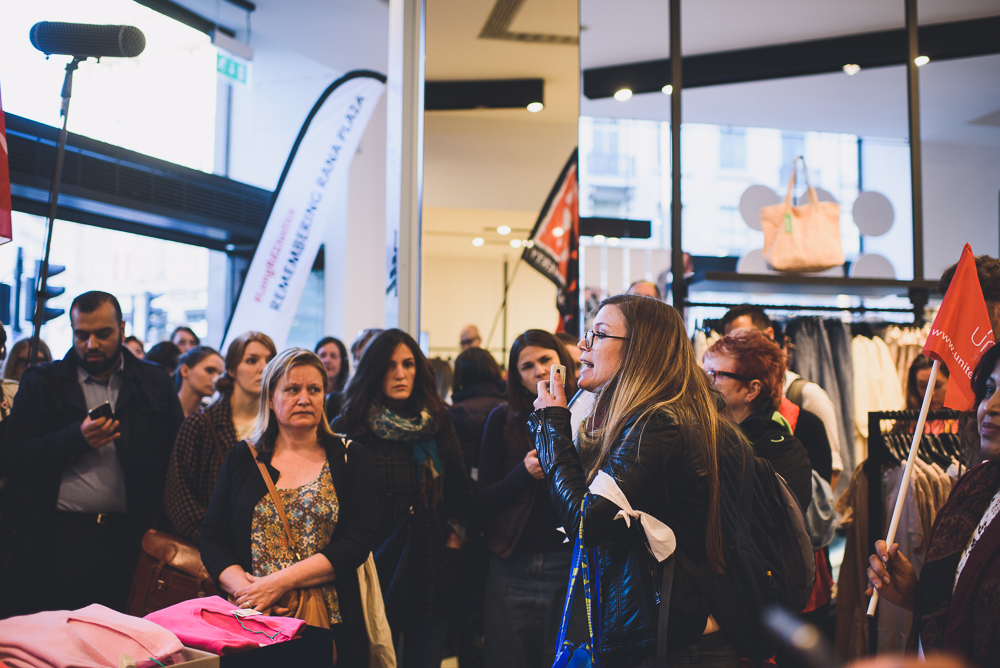 The ensuing scandal sent Boohoo’s share price into free fall, although it has since begun to recover, and scared away institutional investors and wholesale partners, such as Asos and Zalando, which have temporarily stopped carrying the retailer’s own brand collections.

Boohoo has since cut ties with two suppliers, unveiled an independent review of its entire supply chain, and pledged 10 million pounds to eradicate “workplace malpractice.”

Earlier this month, Boohoo’s chief executive officer John Lyttle said the company was “deeply shocked by the recent allegations about the Leicester garment industry,” and would terminate any supplier relationships that violated its code of conduct. Looking ahead, Boohoo said it plans to update the markets on the progress of the independent review in September, and again in January.

Here, Meg Lewis, campaigns manager at Labour Behind the Label, a Bristol, England-based charity that works to improve conditions and empower workers in the global garment industry, talks about the Boohoo-coronavirus report, and what she thinks governments and fast-fashion bosses should do now to fix the system.

WWD: Did the findings from your latest Boohoo report, and from the Times’ undercover investigation, come as a surprise?

Meg Lewis: We’ve been monitoring Boohoo for a number of years, and we have run a number of campaigns specifically calling on them to improve, to commit to living wages and transparency in the supply chain. More recently, they were one of a number of brands that we targeted with a new campaign about protecting garment workers during lockdown. Throughout, we’ve had contact with Boohoo, and they’ve been in contact with us, but we haven’t seen the kind of meaningful change we needed to see.

When we launched our most recent campaign, the one calling on a number of brands to protect their garment workers during the pandemic, a number of brands actually engaged with us really well. They listened to our concerns, and told us what they were doing to protect their workers. With Boohoo, the moment we started asking more detailed questions about how they were protecting their workers, they stopped contact with us. To us, this is a red flag: If you can’t tell us what you’re doing to protect your workers, there is very little that can be done.

[Boohoo responded to Labour Behind the Label after its COVID-19 report came out in June, saying that since the onset of the coronavirus, it had significantly changed how it operates to closely follow and adhered to all aspects of the guidance provided by the British government to keep everyone in its business “safe and well.”]

WWD: Why are the Leicester garment factories in particular making so many headlines?

M.L.: Leicester is by far the largest place in the U.K. for making textiles, although over the past 10 years, it has been described as being “detached” from U.K. employment law. It has a pool of workers who are particularly vulnerable due to language barriers, fears about their migration status and whether they can [legally] work. Those issues prevent people from applying for a lot of jobs, and from speaking up about exploitative labor.

WWD: Are the Leicester factories an isolated case? And do the problems go beyond the factory floor?

M.L.: Unfortunately, Leicester is the tip of the iceberg. Poor purchasing practices, from all brands, are at the center of the issue, and what is happening with Boohoo’s supply chain is happening in many producing countries in the world. We have to recognize that we are talking about people’s lives. Fashion can come at the expense of people’s lives — and that’s much too great a price to pay. This problem is a global issue and it’s very deeply rooted. I would encourage people to be shocked and outraged about what’s happening in Leicester, but also to look at what’s happening across the world in the fashion industry.

M.L.: That report was great because it really detailed what was happening, and it recommended things that would really have made a difference in the garment industry. We’ve seen a lot of government officials commit to investigating the factories in Leicester now, but the factories are just one part of the story. We also need the government to investigate the purchasing practices of the big brands and to ask why nothing has been done in the last 10 years. It should not take undercover reporters from the national newspapers going into factories to tell you what is going on in your supply chain. It’s appalling that we’ve had these reports of people who have been so badly exploited within the U.K. and no action has been taken. We also need the government to reflect on the wider issues around racial and economic inequalities, and we need legislation to regulate brands and purchasing practices. Until we tackle all of those problems, it will be hard to see the changes.

WWD: Do you think that government, and the local authorities, have been loathe to look into garment worker exploitation in places like Leicester because some fast-fashion companies, such as Boohoo, are owned by successful entrepreneurs of South Asian origin?

M.L.: No, I don’t think so. Looking at the wider picture, Boohoo is one company, but when we look more widely at other fashion brands, there are a lot of white male billionaires who are heading up these companies, and they’re not held accountable, either. There’s definitely a wider sort of systemic issue here, and I think it’s about economic inequality within the supply chain. You’ve got these billionaires at the top of the supply chain, while garment workers — whether they’re in the U.K. or abroad — are predominantly from diverse communities who are being given illegal wages and working in exploitative conditions.

WWD: Boohoo is targeted squarely at Gen Z, a demographic that is often blamed for its addiction to cheap fashion due to social-media pressure. What role does the consumer play in enabling these fast-fashion companies to thrive?

M.L.: We should stop blaming the consumer. Statistics highlight that young adults today are lacking a lot of the benefits that the older generations had, but they often get blamed for a lot, and I don’t think it’s helpful. What we need to do is point the finger at these companies that gain a huge profit from them, and that put a huge amount of budget and work into convincing young people that they need to have new clothes every week in order to be relevant, or happy or confident. Young people are bombarded with these images, these aggressive marketing campaigns. So, let’s not blame young people. Instead, let’s look at the wider picture of why have we got into this situation whereby people think that fashion is what they need to be happy.

WWD: What sort of work will Labour Behind the Label be doing now, and over the next months?

M.L.: We are looking about how to make meaningful change within the garment industry so that we’re not in a situation like this again. When the lockdown started, a lot of big clothing brands immediately canceled orders that had already been produced or were nearing production. What they did went against their code of conduct, and against their contract. But because they have such power in the supply chain, they could just do it and the garment workers were left unpaid. So, we’re looking at ways to ensure that doesn’t happen again. We’re also going to try to get brands to pay higher costs to suppliers, and to change their purchasing practices, and also change the way that business takes place within the garment industry. We want to make sure that people are not exploited like that again.