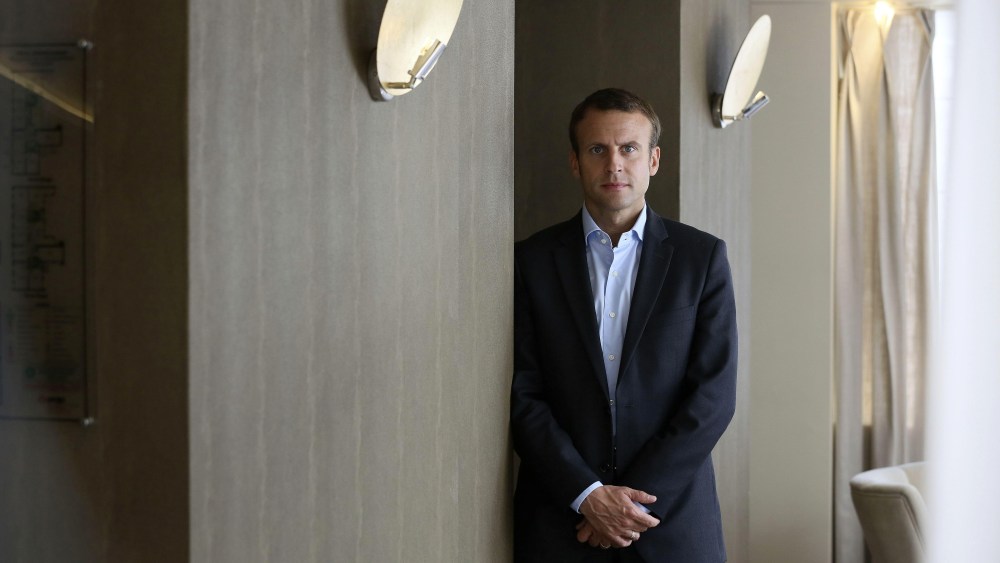 PARIS – It’s not just the market and business leaders who are speaking out in support of French presidential front-runner Emmanuel Macron — creative opinion leaders are also making their views felt.

Among the more outspoken, Balmain designer Olivier Rousteing came out in support of the centrist candidate, who emerged as the clear favorite in the first round of voting on Sunday for France’s next president, in what many describe as the most unpredictable election the country has seen in decades.

He will face far-right leader Marine Le Pen in the second round on May 7, marking the first time in history that neither mainstream left- or right-wing party is present in the runoff.

“Let’s walk,” wrote Rousteing alongside a black-and-white photo of the presidential hopeful, a play on the name of his party, En Marche (On the Move, in English). “Bravo @emmanuelmacron. We need a republic, a vision, a future for France. Let’s walk together towards a future made up of freedom, equality and fraternity. I believe in France I believe in Emmanuel Macron.”

His comments were met with a wave of criticism online, however, as followers questioned his views and understanding of the candidate’s policies.

While Macron is resoundingly the choice of business leaders for his pro-European stance and campaign based on financial reform, he is unpopular with large parts of the population, who have come to mistrust business and financial institutions, leading to another outsider, far-left candidate Jean-Luc Mélenchon, coming a close fourth behind conservative candidate François Fillon, whose campaign was scuppered by corruption accusations, in Sunday’s poll.

“I think the market is taking a sigh of relief, as it anticipates Macron will win the second round,” summed up Luca Solca, sector head of luxury goods at Exane BNP Paribas. “The most negative scenario of a Le Pen plus Mélenchon confrontation has been averted,” he said.

“I’ve Voted,” he wrote on Sunday, using the official expression that seals each voter’s ballot in polling stations. “Hope that all French people will : a) show up massively to prevent extremism from killing our country b) make the right choice and elect the one who is best qualified to give France the power it deserves.”

Simon Porte Jacquemus, meanwhile, said he would vote Macron in the second round in order to prevent the far-right, anti-EU Front National from winning. Most of the candidates defeated in the first round on Sunday have called for voters to rally behind Macron to create a barrage against extremism.

Jacquemus published three identical French maps on Instagram, one accompanied by the text in French, “I will never leave you, I love you forever. Sunday May 7 I will vote against the Front National, I will vote Macron. Strength and Sunlight,” while another featured the text, in English this time, “Love you France and that is forever.”

Most, however, were more reserved with their views.

Alber Elbaz was playing it cryptic on Sunday, posting a photo of the four leading candidates’ election posters with his face just visible in the corner. “Who will make it to round two?” he wrote.

“Tomorrow is the day to use your voice,” wrote Nicolas Ghesquière on Saturday, proudly showing his French passport and voter’s card, but with no clue as to his political views.

Caroline de Maigret posed outside her local polling station, in the ninth arrondissement, while Inès de la Fressange posted a picture of a tiny town hall in the rural Eure region bathed in sunlight. Carine Roitfeld’s chosen shot was a rather grander setting beneath the Hôtel des Invalides’ golden dome.

Actress and model Aymeline Valade expressed her frustration with French politics, a sentiment mirrored by much of the population, publishing a photo of a scarf emblazoned with the word “Resist.”

She wrote alongside it, “I personally think this election is a joke. None of them should be president. I feel like we all have a collective responsibility for this situation and we kind of deserve it…I will vote ’cause we must but it’s a pain.”

Nathalie Rykiel posted an illustration by Anne Messager of a French map drawn to look like human intestines with a caption that could be roughly translated as “France has indigestion,” against which she wrote, “Help France in danger, Vote. To live in France is to resist.”