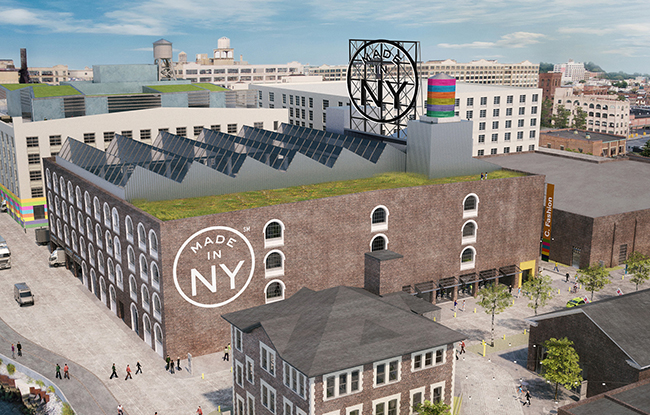 BROOKLYN — New York is determined to make Brooklyn a hub for apparel production — and it just unveiled a $136 million investment toward that goal.

Mayor Bill de Blasio and city officials on Tuesday detailed a plan to build a Made in New York Campus at Brooklyn’s Bush Terminal for the garment, film and television industries.

De Blasio said the Made in New York Campus, which will consist of two renovated warehouse buildings and a film studio to be built in the waterfront district, will support more than 1,500 permanent jobs for garment manufacturing and film and television production, and the build-out of modern garment manufacturing space, sound stages and other campus improvements is expected to create more than 800 construction jobs.

Deputy mayor for housing and economic development Alicia Glen noted that this is the most recent investment the city is making in Sunset Park, where millions of dollars has been dedicated to grow thousands of industrial jobs.

The push to boost apparel manufacturing in the city began under former Mayor Michael Bloomberg, de Blasio noted, but continues to gain steam as part of the entire Made in America movement. While de Blasio and his officials are political opposites from President Trump, their plans also fit in with his campaign vow to bring major manufacturing back to the U.S., including apparel.

As part of his 2017 State of the City address Monday evening, de Blasio said City Hall is committing to adding 100,000 good-paying jobs, including these Sunset Park ones, within the next decade — and including adding 40,000 jobs in the next four years.

“We have used our Made in New York brand to grow fashion and film companies, and today, we’re committing some of our most important real estate assets to support them, as well,” Glen said Tuesday. “These industries support hundreds of thousands of families with good wages, and they need affordable and modern space to grow. The Made in New York Campus represents the collision of our creative economy and advanced manufacturing. This is going to be a 21st century working waterfront that keeps our city the capital of film and fashion.”

Glen pointed out that with average salaries of $57,000 in the fashion industry and $53,000 in the film production industry, the $136 million being spent on the project represents an investment in good-paying jobs with upward career tracks for New Yorkers. Local hiring and workforce training will ensure Sunset Park residents have access to the campus’ new jobs. The Fashion Institute of Technology will launch two courses for makers at nearby Brooklyn Army Terminal, which will be integrated into the overall project.

Speaking at a press conference in the huge warehouse complex now owned by the city that the New York City Economic Development Corp. will operate, the city officials discussed the importance and history of New York’s garment manufacturing. They said it doesn’t reflect a shifting of the industry from Midtown Manhattan, but rather a new opportunity to build on the small yet real resurgence of apparel production in the city over the last several years.

“You’re going to see this whole area come alive,” de Blasio said. “Good paying jobs are the bedrock of a strong city. We will continue to invest in the Made in New York brand and in New Yorkers.”

Glen said Sunset Park has many pockets of such manufacturing, places such as Pratt Institute’s Brooklyn Fashion + Design Accelerator, as well as jewelry and accessories firms.

While garment production comprises 30 percent of the city’s manufacturing jobs, the industry has faced decades of global economic pressures that have forced companies to look overseas for production, Glen noted. The Made in New York garment manufacturing hub will provide small spaces, ranging from 2,000 to 20,000 square feet, rented at affordable rates to companies working in patternmaking, marking and grading, cutting and sewing, and sample making.

The hub will include shared services and related uses to support the success of these apparel firms and the larger Sunset Park garment cluster, such as shared logistics and common services such as photography and educational support. It will support 25 to 35 fashion manufacturing tenants.

The Made in New York Campus, anticipated to open in 2020, aims to synergize creative manufacturing uses and provide affordable, best-in-class industrial facilities for apparel manufacturing, film and media production, and related services and industries.

The fashion industry already represents 182,000 jobs in the city, a 7 percent increase since 2000. Glen said one key factor beside cost of why many apparel manufacturers left New York was because they couldn’t secure modern, affordable space.

“The businesses that want to manufacture in New York are facing a very uncertain future as far as their real estate,” Glen said. “That’s what we can do by creating the Made in New York campus.”

James Patchett, president and chief executive officer of the NYCEDC, said, “The Made in New York Campus will not only serve as a state-of-the-art industrial facility; it will provide a dedicated and affordable home for garment manufacturers and media production in Sunset Park.”

He said the city and NYCEDC have focused on strategically investing in these job-intensive sectors in the Made in New York initiative.

Women’s wear designer April Johnson, founder of Alasdair, said she makes all her collection in New York and that has helped her manage her business and give it an image, as well.

“Made in New York is a growing fashion movement that will succeed with real backing — the kind that delivers secure jobs to factories and deliver reliable services to designers, and that integrates the disparate arms of the local industry into a more organized and reliable whole,” Johnson said. “The city’s commitment to preserving and growing our manufacturing capacity could be the game-changer we need.”

The city’s investments will result in major renovations to two existing buildings to create nearly 200,000 square feet of garment manufacturing space and a newly constructed 100,000-square-foot, state-of-the-art film and television production facility. In addition, it will include pedestrian-friendly streetscape improvements and new plaza space, such as improvements to the 43rd Street corridor within the campus to improve visitor access to Bush Terminal Piers Park.

To help anchor the Made in New York campus, the NYCEDC will be seeking a tenant to provide food retail and food manufacturing in the 7,500-square-foot Café Building.