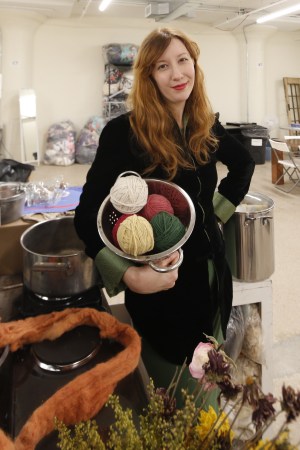 BROOKLYN, N.Y. — Manufacture New York has come a long way in a short time, and is now embarking on an evolutionary road in which it could play a part in shaping the future of the U.S. fashion industry.

MNY began in 2012 as a production incubator led by Bob Bland, who is the organization’s founder, chief executive officer and driving force.

Last month, MNY became part of the U.S. Department of Defense and Massachusetts Institute for Technology’s sweeping $315 million public-private project called the Revolutionary Fibers and Textiles Manufacturing Innovation Institute aimed at keeping the country at the forefront of fiber and textiles innovation. It will be located at MIT’s Sloan School of Management in Cambridge.

Under the banner Advanced Functional Fabrics of America, the consortium comprises firms from several industries and fields, including fashion groups VF Corp., New Balance and Nike and textile manufacturers Milliken & Co., Buhler Quality Yarns and Inman Mills. The project also encompasses 52 companies and 32 universities, colleges and other schools, including the Fashion Institute of Technology.

In the New York region, FIT is partnering with MNY to launch and host skills-based training and registered apprenticeship programs across the fashion textile manufacturing supply chain, including Advanced Functional Fabrics of America technical project participants.

MNY’s Bland will serve as the deputy director of apprenticeships and internships and will establish a regional training hub for New York.

In a wide-ranging interview and tour of the Brooklyn facility, Bland explained that her specific role is to create a national apprenticeship program, but her goals are far more grand.

“The Institute is about the convergence of technology and commercial fashion,” she said. “We’re the only founding team member from the fashion industry. Academics can take a very research-driven focus without much attention paid to commercialization. We’re going to focus on making new innovations commercially viable, ultimately creating business and jobs in the city and country.”

As for MNY’s cooperative and hands-on approach to sourcing and production, Bland said, “A lot of people have the perception that small-based manufacturing is less professional than bigger-batch manufacturing, and that isn’t always true. Bigger isn’t always better. Wearable opportunity is another opportunity along with sustainability to see a convergence of a redefining of values in the fashion industry that will result in a tighter, leaner industry that will be able to be more effective, more responsive to the customer and will be able to create better-paying jobs as result here and hopefully around the world.”

Bland said the apparel and textile industry, one of the largest in the world that provides employment opportunities and economic foundations in many countries, also has a major environmental impact on the world.

“We have to take responsibility as an industry for our economic…and environmental impact on the world,” she said. “We have the opportunity to shape the fortunes of the globe.”

MNY’s Liberty View facility takes up much of the fourth floor right now with 15 companies on sight and another 60 companies it’s working with throughout the city and country in areas such as wearable technology, research and development, product development, and business and sustainability consulting.

“We have a diverse team within MNY,” Bland said. “What we’ve given the industry so far is more than one perspective on what this industry wants and is needed, and that’s something that will have to continue.”

MNY has pattern-making, sample-making and fabric sourcing as an original service it’s providing, and in the processes, is “trying to steer companies toward domestic manufacturing and product.”

“We have launched over 90 brands out of our product development and incubator,” Bland said. “Many of our brands are now in their second and third seasons and they’re still going strong. They learned a lot working with us and they’ve been able to go out on their own. It’s been very gratifying.”

Bland noted that MNY started with women’s wear and now has a wide range of products, from yarn production to bridal design and manufacturing.

“Now that we’re part of the consortium that just won the $75 million grant from the [Department of Defense] that’s resulting in a formal partnership between us and the Fashion Institute of Technology, where over the next five years we’re going to be building a completely unprecedented workforce training program for local Sunset Park residents that’s at the convergence of traditional fashion manufacturing and wearable technology,” Bland said. “So this is going to create a whole new class of jobs that never existed before — areas like programming, machine tech, user experience in making a garment or producing fabrics.”

A major aspect of the companies on premises or that are clients, is a cooperative, collaborative approach to the way they operate. Many of the young entrepreneurs on the walk-through spoke of the inspirational and practical benefits of this method.

Daniel Silverstein, who runs Zero Waste Production, uses only leftover fabrics and materials to create and produce his sportswear line. Silverstein explained that he gets a majority of his materials from “a cutting room 10 blocks away that literally lets me take all I can carry and a friend’s swimwear company gives me waste fabric.”

“All materials come from New York,” he said. “My design aesthetic has a certain time and place, but I’m finding the more wearable side of things, as well.”

Nica Annette Rabinowitz runs Artifact, a yarn and fabric firm on-site that uses only natural dyes and materials to create its product.

“We sell yarn and fabric to some people here, and also make custom textiles,” said Rabinowitz, who is also the educational coordinator for MNY.

She moved Artifact from Red Hook to Liberty View about a year ago and has seen her business grow as a result.

“Manufacture New York has its own ecosystem,” Rabinowitz said. “What we’re doing is collaborating and spreading the word. We couldn’t be in a better place. The space is extremely affordable and you’re also getting the opportunity to interact with a bunch of interesting people doing exciting things. It’s a great example of something that’s a great idea on paper that’s actually being implemented really well.”

Artifact uses natural materials such as mushrooms, plants and vegetables from a local dye garden, and other local sources, as she shows materials in process and work-table areas where she also conducts classes.

The plan is for MNY and the Institute to take five floors of the building that is undergoing $100 million in improvements by developer Salmar Properties.

The first two floors are now being developed for retail, with Bed Bath & Beyond, Buy Buy Baby and Saks Off 5th committed to opening stores.

Bland noted that part of wearable technology is biomaterial and material science and how it pertains to sustainability. This includes classes it already teaches on bio-leather, and could include areas such as bacterial printing, mushroom spores that are going into packaging that Ikea has already implemented, embedded circuits and interactivity built into fibers, fiber batteries and fiber circuits.

In a broader sense, Bland said, “Manufacture New York’s role is in redefining manufacturing in New York City. We can create messages, we can create movements, but it’s ultimately up to the business owners to make a decision and collectively decide to reshape fashion manufacturing in New York. What we have encouraged them to do is reduce their overhead, to find alternatives to Manhattan to have a more fiscally sustainable business.”

“There’s also a lot of a younger people adopting fashion manufacturing businesses, especially in specialty businesses,” she added. “What Manufacture New York can provide is a redefinition that will allow them to grow their businesses under proper margins.”

Once the DOD-led Institute gets going, she sees wearable technology and textile innovation as an opportunity for manufacturers “to change their game, diversify their client base and recognize urban manufacturing as a niche that can be cultivated.”