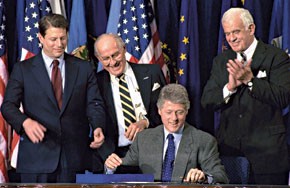 The year was 1992, when Bill Clinton was elected.

Fast-forward to this year’s race for the White House: The U.S. economy is slowing and NAFTA is again a flash point, 14 years after being enacted by the U.S., Mexico and Canada, and with much of the job migration foreseen by Perot now a reality.

The agreement represents a model that unions and labor rights groups want to change. They don’t necessarily expect jobs to come flowing back to the U.S. if NAFTA is rewritten, but are trying to halt trade accords they contend give companies incentives to move elsewhere.

Sens. Barack Obama (D., Ill.) and Hillary Rodham Clinton (D., N.Y.), battling for the Democratic nomination, have labeled NAFTA a bad deal for American workers and vowed to renegotiate the pact. The president could reopen talks, but Congress would likely have final approval.

The next president must be “truly committed to fixing NAFTA,” Clinton said. “I have said that I will renegotiate NAFTA and have a specific four-part plan to get it done.” Her proposals include: strengthening enforcement, labor and environmental provisions; regular reviews of the accord, and changing investment provisions that give special rights to foreign firms.

In arguing to amend the pact, Obama said NAFTA “gave broad rights to investors [but] paid only lip service to the rights of labor and the importance of environmental protection.”

Obama and Clinton are expected to raise NAFTA and other trade issues, particularly with China, in the run-up to the Pennsylvania primary on April 22 because the state has lost almost 220,000 manufacturing jobs since 2000, according to U.S. government figures.

Clinton has been criticized for her husband’s support of NAFTA. And her schedules as first lady, which were released last week, show she attended a pro-NAFTA rally when Bill Clinton was president.

NAFTA also has generated heat in the Obama campaign because of a flap about whether an Obama aide told a Canadian embassy official that the Illinois senator was using NAFTA for political positioning among core supporters and did not intend to make the changes he was promising.

Sen. John McCain (R., Ariz.), the presumptive Republican nominee, has cast his Democratic opponents as protectionists and argued their proposals to renegotiate could undermine U.S. trade relations with other countries.

“I do not believe in isolationism and protectionism,” McCain said in Pennsylvania, Reuters reported. “We’ve got to stop this protectionist NAFTA-bashing.”

Obama and Clinton are distancing themselves from NAFTA and calling for a renegotiation because “a large portion of the American public has turned against trade and blames NAFTA for their woes,” said Robert Reich, who was labor secretary under Bill Clinton and is a professor of public policy at the University of California at Berkeley.

“The entire debate is displaced — it shouldn’t be over NAFTA,” Reich said. “It should be over how to reduce the growing anxieties of blue-collar workers and the American middle class over trade.”

Reich, a proponent of NAFTA as labor secretary, said international trade, is not the only driving force behind U.S. job losses, citing higher productivity, automation and technology advances, as well.

David Spooner, assistant secretary for import administration at the Commerce Department, said that the issue of NAFTA in the presidential contest is a hollow one for the fashion industry because so many apparel importers and domestic textile producers have benefited from the deal.

“Even when you look at our textile industry [which was divided over NAFTA], some of the more successful U.S. textile companies today are ones who took advantage of NAFTA and invested in Mexico and their investment supports American jobs,” Spooner said.

He added that he wasn’t surprised that NAFTA has “remained a bone of contention on main street” because he repeatedly hears complaints about job losses linked to the trade agreement.

“The facts don’t bear that out,” Spooner said. “Over 90 percent of our trade deficit is with countries with whom we don’t have trade agreements.”

The U.S. textile and apparel sector has lost more than one million jobs since 1994. While the industry blames the losses primarily on international trade, it has also benefited from some of the trade deals by carving out export markets for fabrics and yarns through restricted rules that force U.S. importers to use U.S.-made textiles in their apparel production overseas.

“Any legitimate discussion of U.S. trade policy and the problems associated with U.S. trade policy begins with China,” said Auggie Tantillo, executive director of the American Manufacturing Trade Action Coalition. “Failure to identify and discuss China right up front is a pretty serious indictment of the lack of seriousness on the trade issue during this campaign.”

However, organized labor — a catalyst in elevating NAFTA as part of the presidential debate — argues that reforming it is an appropriate place to begin in creating a trade policy that lessens the impact of trade on U.S. workers.

“This reform of NAFTA discussion is very good,” said Bruce Raynor, general president of UNITE HERE. “Part of renegotiating NAFTA is that we don’t want our market disrupted so we have to have a percentage of market share for domestic companies that is protected in trade agreements and NAFTA is the place to start.”

Raynor said U.S. apparel and textile manufacturing jobs are still vulnerable to trade agreements like NAFTA, although he acknowledged that China is a major issue that needs to be addressed.

But Erik Autor, vice president and international trade counsel at the National Retail Federation, described the presidential politicking over NAFTA a “tempest in a teapot.”

“It’s a laughable issue,” he said. “The point is those [apparel and textile] jobs that may have moved to Mexico were going to go whether or not NAFTA was in place.”

Canada is the largest trading partner with the U.S., exporting $78.2 billion worth of mineral fuels and oil and $60.3 billion in autos to the U.S. last year.

Mexico, the third largest U.S. trade partner after Canada and China, exported $54.8 billion in electrical machinery and equipment and $33.9 billion in autos in 2007.

However, Mexico and Canada have both lost a significant amount of apparel and textile production since global quotas were eliminated in 2005, which made low-cost labor countries such as China and Vietnam much more attractive to U.S. brands.

In the last year, Mexico fell to the fifth largest apparel supplier to the U.S. in 2007 from the second largest in 2006, decreasing the volume of apparel exports by 18.05 percent to 1.2 billion square meters equivalent. Mexico is still the number-three supplier of apparel and textile imports, behind China and Pakistan, but China produces the lion’s share. Canada fell to the fifth largest supplier of textiles and home furnishings in 2007 from the third largest in 2006, with imports falling sharply by 21.24 percent to 1.79 billion SME.

But the three countries still have robust commercial ties. Total trade between the NAFTA partners tripled between 1993 and 2007, to $930 billion from $297 billion, according to the U.S. Trade Representative’s office.

Employment in Mexico’s apparel, textile and leather maquiladora export sector fell 13.1 percent in 2006, according to the Maquila Solidarity Network, a labor rights nongovernmental organization, based on Mexican government figures. The number of apparel and textile maquiladora border factories fell to 550 in 2006 from 1,100 in 2000.

“NAFTA was supposed to provide jobs to Mexico, but we have seen other changes in the trade rules that overrides whatever benefits might have gone to Mexico from NAFTA,” said Bob Jeffcott, a policy analyst for the Maquila Solidarity Network. “The end of the import quota system in 2005 has had an extremely significant impact on Mexico. Since then, we have seen a lot of [apparel and textile] plant closures as companies shifted their production either to Central America or Asia, as well as a significant cutback in orders placed in [maquiladoras].”