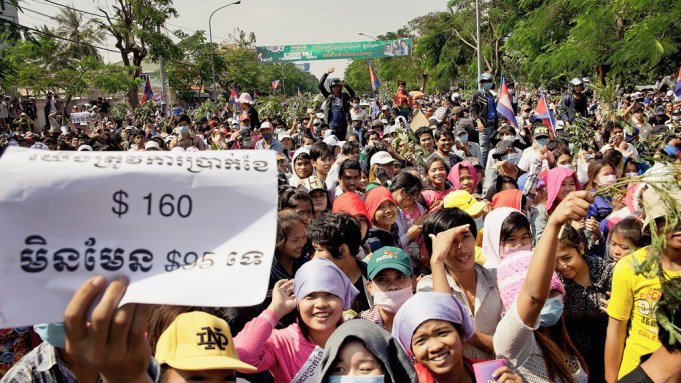 Phnom Penh, Cambodia — Cambodia’s garment workers continued their protest Sunday over a higher minimum wage as they joined tens of thousands of people at a rally held by the opposition Cambodia National Rescue Party.

Many of the workers in the protest sported “$160” stickers and sashes tied across their foreheads, referencing the minimum monthly wage they are demanding. The protests saw no injuries. Today, apparel industry workers are expected to protest outside the Ministry of Labor. In addition, union officials are expected to hold a meeting later in the day with the ministry and the Garment Manufacturers Association in Cambodia, or GMAC, about the minimum wage.

The protests have resulted in serious disruptions to Cambodia’s apparel industry, which could suffer losses of tens of millions of dollars following the nationwide strike by more than 300,000 garment workers over the minimum wage.

Mass demonstrations kicked off in the capital after the government said Tuesday that the minimum wage in the garment sector will be raised to $95 a month in April, an amount that falls short of demands by workers that it should be increased to $160 a month.

The government also promised that the wage would be increased incrementally each year until it reaches $160 in 2018, a proposal that independent unions contend is unacceptable. They promise to stage ongoing demonstrations until their demands are met.

In response, the GMAC advised its member factories to shutter until today, creating a halt in production for three days that would have a significant impact on the industry.

GMAC treasurer Albert Tan said it is unclear how much manufacturers could lose from this stoppage, but with about 400 factories, he proposed that losses could exceed tens of millions of dollars.

“Just as a general guideline, if you lose production for one line, you are losing something like $700 to over $1,000,” Tan said, adding that a typical factory will have about 10 production lines. The closings also mean factories will miss their shipping schedules.

“We pray hard that everything will be settled by this weekend because no business can stop just like that. Nobody can pick up the losses,” Tan said.

The unions’ recent call for nationwide protests is the latest in a turbulence-filled year for the industry, during which GMAC has recorded more than 130 strikes in 2013, the highest amount in the last decade. Yet the industry continues to thrive, with Ministry of Commerce data showing that exports have reached $5.1 billion in the first 11 months this year, a 22 percent increase compared to the same period in 2012.

The government had previously raised the minimum wage from $66 to about $80 last May, two months before July’s national election.

Hiroshi Suzuki, chief economist of Business Research Institute of Cambodia, said Friday that these strikes will not immediately affect the industry, but major brands and buyers will see them as a reason to decrease sourcing from the country in the following year.

“I have concerns for the next two years’ performances,” Suzuki said, adding that in addition to the direct effects of the ongoing strike, Cambodia’s reputation could be affected. “So many buyers or brands have some concerns on the production in Cambodia, and this could affect the volume of the products in the next year.”

The chief executive officer of Swedish retail giant H&M, Karl-Johan Persson, visited Cambodia in October to speak privately with Prime Minister Hun Sen about concerns of nonstop industrial action and the importance of an annual wage review. H&M has been sourcing from suppliers in Cambodia since 1998 and is one of the largest buyers in the sector.

H&M said Friday it is closely following the situation, but declined to comment on the ongoing strikes.

In Phnom Penh on Friday, three demonstrations were staged by workers at separate locations — at the Phnom Penh Special Economic Zone; in front of the Ministry of Labor located on the traffic-laden Russian Boulevard and at Freedom Park, where workers joined the opposition political party, which has been contesting Prime Minister Hun Sen’s rule since July’s national election.

According to Oum Visal, legal officer of the Coalition of Cambodian Apparel Workers Democratic Union, two of CCAWDU’s members were seriously injured in clashes with the city’s security forces during the morning’s protest at the Phnom Penh Special Economic Zone.

“One has a broken left arm and another one was injured in the face because police had beaten him severely,” Visal said. Another five members suffered less serious injuries.

He added that 300,000 workers are participating in demonstrations in six provinces besides the capital city, mostly protesting outside their factories’ gates for higher wages.

Heng Sour, a Ministry of Labor spokesman, blamed the union leaders for inciting the workers to protest, and requested they cease the demonstrations.

“If they act in that way, the Ministry of Labor will ask them to respect the law,” Heng Sour said, explaining that unions were allegedly encouraging their members to destroy factory property during these protests.

He added that the protesting garment workers were “just a small group,” and that the government will not revise its proposed wage hike.

“We have no plan to change the decision we made because the [Labor Advisory Council] already approved it,” Sour said. “Everything will still be implemented accordingly.”

According to a Ministry of Labor statement released Friday evening after meeting with six independent unions, union leaders had agreed to cease striking and workers will immediately return to work.

But Ath Thorn, president of CCAWDU, said his union members are striking of their own accord and will not stop until there is a solution.

“Normally, the workers do these strikes by themselves; we cannot ask the workers [to stage or stop protests],” Thorn said. “We spoke to the workers [after the meeting] and they said that if there is no result, they will not come back to work.”

Dave Welsh, Cambodia’s country director for Solidarity Center, a labor rights organization affiliated with the AFL-CIO, said the government is missing the point by blaming the labor unrest on the opposition political party or the union leaders as the call for a substantial minimum wage increase has been ongoing all year.

“There’s widespread industry discontent that $95 is nowhere near to being close,” Welsh said. “The whole point [of the minimum wage increase] is to address inflation. Five years from now, $160 would look entirely different in terms of the inflationary pressures.”

Ratcheted tensions from Friday’s protests could also “set off a spark” and lead to violence as the demonstrations continue, he said.

“It’s genuine discontent, it’s widespread, and unless if there’s some concessionary moves from the government, it will keep on going,” Welsh said.