The port reopened Thursday morning as a few protesters from Occupy Oakland remained at the marine terminal gates. 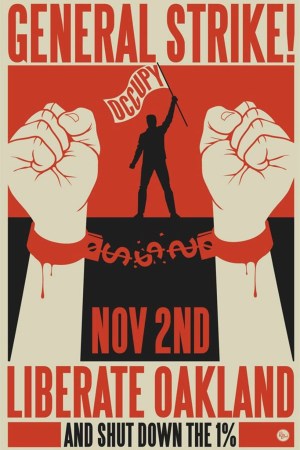 SAN FRANCISCO — The city of Oakland on Thursday worked to get back to normal after thousands of protesters a day earlier disrupted businesses and overnight shut down the nation’s fifth busiest port.

The Port of Oakland reopened Thursday morning as a few protesters from Occupy Oakland — one of the offshoots of Occupy Wall Street in New York — remained at the marine terminal gates, although they were no longer preventing the passage of trucks and employees.

The port, across San Francisco Bay from the Golden Gate City, is key to international trade for northern California and inland Western states, with knitwear as the third-largest imported commodity, accounting in 2010 for 8.8 percent of the volume with a value of $2.14 billion. Woven apparel worth $465 million was ranked 10th, equaling 1.9 percent of imports.

Port operations Thursday morning were gradually ramping up after the closure disrupted timing along the supply chain, thus requiring rescheduling of truckers for incoming and outgoing cargo, as well as of longshoremen working the docks.

“When you have a break in the system, it takes awhile to get things rolling again,” a port spokesman said, underscoring that “despite the stoppage last night there were no injuries, no property damage and no major security problems. That is a good thing. We are very pleased with that.”

Protests downtown earlier in the day were also largely peaceful, where the crowd was estimated by the city to be 7,000 and represented people of all ages.

Occupy Oakland pegged the gathering at 10,000 demonstrators who gathered in front of City Hall for a rally and a march during which organizers claim business at several banks was disrupted. They said the crowd then doubled in size as protesters made their way to the port along a freeway overpass.

Just before midnight, police reported there was an outbreak of violence downtown. “The protesters began hurling rocks, explosives, bottles and flaming objects at responding officers. Several private and municipal buildings sustained heavy vandalism,” according to the city.

Occupy Oakland surfaced on Oct. 11 when protesters began camping in the downtown plaza in front of City Hall, calling for the “end of corporate domination” and for “an economy that prioritizes the needs of the 99 percent, and not the greed and profit of the 1 percent” of Americans.

Part of Oakland’s job-growth strategy is to attract more retail businesses of all kinds, since the city is largely bereft of places to shop, particularly downtown. The city estimates that Oakland could support $1.5 billion in annual sales at apparel, home furnishings and department stores, and $1 billion in sales at supermarket, drug and other convenience stores.

While Occupy Oakland protesters are calling for more jobs, downtown men’s wear retailer Art Pollard is struggling to keep his Mr. K’s Clothing Store in business, which has been affected by the ongoing demonstrations. The store is one of the few apparel retailers in the neighborhood, which includes a Sears and Men’s Wearhouse.

“I am part of the 99 [percent],” said Pollard, of his otherwise support of Occupy Oakland’s message. Since the protests began three weeks ago his sales have been off 60 percent. “How much of this can we go through and maintain any kind of financial viability?”

Before the 2009 economic downturn, the city was poised to launch plans for a shopping and residential district along the four-mile stretch of Broadway that runs through the city.

While still on the drawing board, plans have been scaled back because developers remain cautious about new construction. A revised plan released Oct. 24 now calls for the shopping district to be created incrementally, starting with the creation of an independent retailer district in empty historic storefronts to which an existing arts district will be extended.

Meanwhile, at a Thursday news conference in Washington, Federal Reserve Bank chairman Ben Bernanke was asked about the message of Occupy Wall Street demonstrators and whether the Fed can do anything to promote an equitable economy.

“As I’ve said before, I certainly understand that many people are dissatisfied with the state of the economy, I’m dissatisfied with the state of the economy. Unemployment is far too high,” Bernanke said. Economic “inequality, which is not a new phenomenon…[has] been going on for at least 30 years. But obviously as that has continued we now have a more unequal society than we’ve had in the past. So again I fully sympathize with the notion that the economy is not performing the way we would like it to be. And in that respect, the concerns people express across the spectrum are understandable.”

Continued Bernanke of the Fed, “We are trying to do our best to support economic growth and job creation. I think it would be helpful if we could get assistance from some other parts of the government to work with us to help create more jobs, but certainly we are doing our part to create more jobs and opportunities in America.”