Economy, trade near top of priorities for incoming president's first days in office.

By Kristi Ellis and Liza Casabona on November 4, 2008
View Slideshow 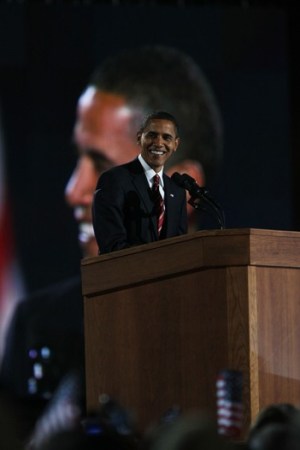 Trade of Made in Italy Counterfeit Goods Said to Be Worth 5.2B Euros

Barack Obama secured a victory in one of the most hotly contested presidential elections in years — and with strong support from the fashion industry. Obama now faces the major challenges of jump-starting the faltering economy, pumping confidence back into the free market and shoring up and containing a two-front war in Iraq and Afghanistan — not to mention uniting a country where a significant number of people didn’t vote for him. All are expected to be at the top of the 44th president’s agenda in his first  100 days in office.

Facing a severe economic crisis that many economists say has parallels to the Great Depression, a beleaguered manufacturing sector and a public with little confidence in the market or the government, the new president-elect will shape his agenda and priorities during difficult and turbulent times. “The first and foremost [priority] on the domestic side will be to take steps to ensure the economic ship is righted,” said Steve Pfister, senior vice president for government relations at the National Retail Federation. “The president is also going to have to continue looking at the situation in Iraq and Afghanistan. Those are the two big issues.”

As for the fashion and retail industries specifically, a lot is at stake in Obama’s agenda on China, international trade, unions, port security and corporate and individual taxes. While some trade experts expect the new president to immediately address their issues, at least in broad strokes, others argue the trade agenda will likely take a back seat in the first 100 days — the legislative timetable coined by President Franklin Roosevelt in his 1933 inaugural speech — to other priorities such as an economic stimulus package and new foreign policy direction. Still, trade policy played a key role in the presidential race and several congressional contests in such depressed manufacturing states as Michigan, North Carolina, Ohio and Pennsylvania, sending a clear message to the next president that mitigating the impact of trade on U.S. workers and companies will need to be addressed.

The breakdown of Obama’s likely priorities:

• An economic stimulus package: Democrats and Republicans generally agree on the need for a second stimulus package to revitalize the economy, but their prescriptions differ widely. Obama has called for a new round of tax rebate checks, $25 billion to build roads and repair schools and $25 billion in aid to states and local governments. This is likely to be priority number one of the new administration, along with a Congress where Democrats appear to be headed toward an increased majority in both houses.

• Foreign policy: Obama opposed the invasion of Iraq and has pledged to remove all combat troops within 16 months, with the exception of a smaller stabilizing military presence. He also plans to boost troop levels in Afghanistan.

• China: National security, trade, currency and intellectual property policies relating to China are expected to have some prominence as the president reviews the Bush administration’s policies and approach and carves out a direction of his own. Obama made several pledges to the textile industry before the election, including putting more pressure on China to raise the value of its currency, which U.S. manufacturers argue puts them at a competitive disadvantage because it makes imports from China cheaper. “As president, I would use monitoring to help ensure that imports from China do not violate applicable laws and treaties,” Obama wrote to the National Council of Textile Organizations last week.

• Trade: As the president begins to select his cabinet members, including the U.S. Trade Representative and Secretary of Commerce, the trade agenda will take shape. Most trade experts expect Obama to put a hold on new agreements and review existing pacts out of the gate. Obama has also said he will try to strengthen labor and environmental provisions in trade deals and use remedy laws aggressively against countries that break global rules.

• Union organizing bill: Congressional Democrats are gearing up to revive legislation, named the Employee Free Choice Act, which would make it easier for workers to organize a union. The House passed the bill, but it stalled in the Senate. Obama, who cosponsored the legislation, has said he would sign it into law if elected and Congress passes the bill. Retail and business groups strongly oppose the bill because it allows unions to replace secret ballots with a card check system in organizing.

An Obama presidency will focus on China issues in its first 100 days, acknowledged Gary Hufbauer, a senior fellow at the Peter G. Peterson Institute for International Economics. Hufbauer said the new president would most likely look to extend quotas and establish some degree of focus on currency issues early on. “It’s all but certain…that the restraint quotas on Chinese imports of apparel and textiles will be in some fashion extended,” Hufbauer said. How tight the restrictions are, how long they would last and what impact they would have on other countries are all unanswered questions, he said, but the extension might be for at least a year.

The president is not likely to complete or address any trade agreements in the early months in office because of the antipathy of Democrats in the House and Senate, which were expected to widen their majorities in the election, Hufbauer said. “The new president is going to be Barack Obama and I think he has no [free] trade mandate,” said Mickey Kantor, USTR under President Bill Clinton from 1993 to 1996, because of the anti-free trade tone of the election campaign and on Capitol Hill. Instead, the focus was on “fair” trade. Given the expected Democratic majorities in the House and Senate, during the first days of the new administration “it’s going to very difficult for President Obama to do anything positive with regard to trade,” Kantor said. “[The new president] would at least be able to explore what a trade agenda could look like in the future.” Initially, however, too many other pressing priorities like the domestic economy, financial regulations, health care, energy and the environment will take up the president’s time, Kantor said. But Auggie Tantillo, executive director of the American Manufacturing Trade Action Coalition, disagreed, saying the next president will likely focus on trade early on because the issue is considered significant among voters. “I think if you look at many key swing manufacturing states, voters there demanded some type of comprehensive program to stabilize manufacturing,” said Tantillo. “When they use the euphemism that they are ‘bailing out main street,’ they can’t do that without focusing on the problems that affect the manufacturing sector and the jobs they provide.” Tantillo said he expects to “get a feel” for the general approach on trade in the early days of the administration, while the specifics will have to wait. “I think we will get a general feel as to whether or not there will be an emphasis on the Doha Round [global round of trade talks which has stalled] and whether the free trade agenda that has been pursued by the past two administrations [Bush and former president Bill Clinton] will be something they will continue,” Tantillo said.

On the domestic front, the role and agenda of organized labor is also expected to gain prominence in an Obama administration. To that end, the Employee Free Choice Act is expected to come into play again in the first days of the new presidency, according to Pfister, whose association, the NRF, opposes the legislation.“If Obama is elected, whatever his new priorities are, it is my expectation that Speaker [of the House Nancy] Pelosi will ensure for him that the Employee Free Choice Act will be front and center,” said Pfister. “She pledged to move that within the early days of the 111th Congress and it will probably be one of the first bills to pass the House. The $6 million question is what is the complexion of the Senate. “We will continue to make the case that we’re not antiunion, but that not only do we not want to turn 50 years of the National Labor Relations Act on its head, but it would also remove the fundamental right for workers, which is a secret ballot.” Bruce Raynor, general president of UNITE HERE, said he expects Obama to quickly send an economic recovery package to the Hill and include in it the Employee Free Choice Act, for which the union has lobbied vigorously. “The real wages of American workers have not gone up since 1979 and American workers have not shared in past recoveries,” said Raynor. “Now we have a serious recession and the only way to have them share in it is through collective bargaining. I think it will be part of Obama’s recovery package.”

On the tax front, Raynor said he expects Obama to push a proposal eliminating tax breaks for companies that move offshore, possibly within the first 100 days. “I think you will see an effort to deal with the tax code, which will include ceasing taxation rewards for outsourcing jobs offshore and providing tax incentives for creating jobs domestically,” said Raynor. He also expects Obama to move fairly quickly to put a moratorium on new trade deals in an effort to “hammer out a new trade format and put in place a new team to do it.” “While there will be a honeymoon period, I don’t think either man [Obama or McCain] will have such a broad mandate that he can just expeditiously advance a very aggressive agenda,” said Pfister, speaking before the election results were in. “The bottom line is the president has the bully pulpit, but it is Congress that has to pass the laws. Either man will face significant challenges and either man will have a window of opportunity to advance an overall agenda, but neither one will come away from this election with a soup-to-nuts laundry list of things he can get done quickly.”