On the Campaign Trail: Talking Taxes, Trade and the Moon

The GOP candidates and President Obama continue to focus mostly on economic issues as the campaign moves forward. 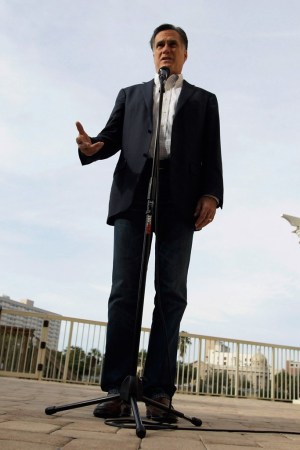 Coming off of a solid win in the Florida primary on Tuesday, former Massachusetts Gov. Mitt Romney, along with the three remaining GOP candidates, headed to Nevada for the caucus there on Saturday. Their positions on a wide range of issues, from taxing the rich and lowering income taxes to trade with Latin America, figured prominently in the campaign talk. Here’s what they’ve been saying.

Texas Rep. Ron Paul: “I would work with the people and encourage free trade and try to set a standard here where countries in Central America or South America or any place in the world would want to emulate us and set the standards that we have.”

Former Massachusetts Gov. Mitt Romney: “We have to have economic initiatives to build trade throughout Latin America, particularly with Colombia and Panama, now part of free trade agreements.”

Former Pennsylvania Sen. Rick Santorum: “For domestic political purposes, the President of the United States sided with organized labor and the environmental groups, and held Colombia hanging out to dry for three years. We cannot do that to our friends in South America.”

ON THE RICH, POOR AND TAXES:

Paul: “I understand and really empathize with the people who talk about the 99 percent and the 1 percent, because there’s a characteristic about what happens when you destroy a currency. There is a transfer of wealth from the middle class to the wealthy. And this has been going on for 40 years. So the middle class is shrinking. They are getting poorer and they’re losing their jobs and they’re losing their houses. But Wall Street isn’t getting poorer, and they are the ones who are getting the bailout.”

Gingrich: “I want to see us move from one launch [to the moon] occasionally to six or seven launches a day. [When 13,000 Americans are] living on the moon, they can petition to become a state.”

“We’ve got to invest in our future, and we’ve got to reduce our deficit. And to do both, we’ve got to make some choices.…Right now, we’re scheduled to spend nearly $1 trillion more on what was intended to be a temporary tax cut for the wealthiest 2 percent of Americans. That’s not fair. A quarter of all millionaires pay lower tax rates than millions of middle-class households.

“And to bring back even more jobs, I want this Congress to stop rewarding companies that are shipping jobs and profits overseas, start rewarding companies who are hiring here and investing here and creating good jobs here in Michigan and here in the United States of America. So our first step is rebuilding American manufacturing. And by the way, not all the jobs that have gone overseas are going to come back. We have to be realistic. And technology means that a larger portion of you will work in the service sector, as engineers and computer scientists. The service sector does well if manufacturing is doing well, so we’ve got to make sure that America isn’t just buying stuff but we’re also selling stuff, all around the world, products stamped with those three proud words: Made In America.”

And here are some suggestions on their style:

If On the Trail means eating fast food on the bus between campaign stops and wearing oversize clothes to hide a couple of extra pounds, Santorum was the winner this week. He should have opted for darker-colored khakis and a blazer and given up the ultrapreppie uniform — but nice belt. And please, they’re casual pants — lose the crease.

The Florida caucus winner cannot seem to let go of the mom jeans and the loafers make it worse. He needs to man it up. The saving grace is the high-neck button-down shirt that helps frame his traditionally handsome face. The soft tailored navy blazer enhances his European fashion aesthetic, very Palm Beach, but it doesn’t hide his newly aggressive stance.

Grandpa finally put on a suit! But he might want to call his tailor and ask for a more structured silhouette with a stronger shoulder. The choice of red tie is very appropriate for a man seeking to look more powerful and presidential. But he’s still wearing orthopedic shoes and he needs a little peekaboo cuff to appear put-together.

A disappointed Newt continues to battle with very dry, flyaway hair. A visit to the barber will solve that and would make him look less like Colonel Sanders from Kentucky Fried Chicken. The off-white shirt and tan tie combination is chic but not appropriate for a political appearance. And it does nothing for his face. Sharp contrast colors pop and help reassure voters of the candidate’s strength.