Murder charges have been brought against the fugitive owners of Ali Enterprises, a garment manufacturer where a fire this week led to the deaths of 264 workers. 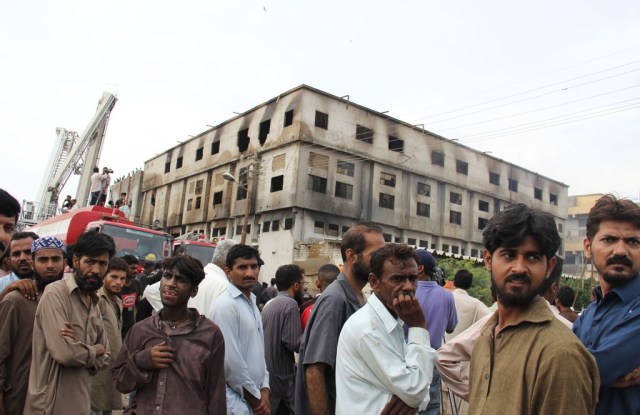 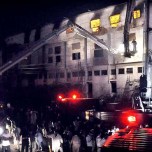 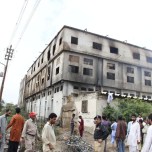 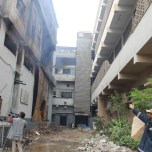 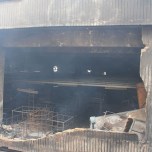 LAHORE — The tragic side of fashion has reared its ugly head.

Murder charges were brought Thursday in Pakistan against the fugitive owners of Ali Enterprises, a garment manufacturer in Karachi, where a fire earlier this week led to the deaths of 264 workers, including a 10-year-old boy.

The owners — identified as Abdul Aziz, Shahid Baila and Arshad — were also charged with attempted murder and criminal negligence for using illegal electricity connections, according to Mohammed Farooq Awan, senior superintendent of Police of the Crime Investigation Agency. The owners have gone missing since the incident, and are on the Exit Control List, barring them from leaving the country. The police are conducting citywide raids to find them and take them into custody.

While the factory was burning down in Karachi on Tuesday evening, 25 people were killed in Lahore in a blaze at a shoe factory. The two factory fires have again brought to the forefront the poor working conditions that prevail in many apparel factories throughout the developing world, from Pakistan and Bangladesh to China and Cambodia. Despite concerted efforts by apparel brands and organizations to improve working conditions throughout the industry, there continue to be problems that verge on sweatshops.

The fires in Karachi have caused public outrage at the callousness of the factory owners and that the government does not strictly enforce safety standards. It has been reported that fires were an annual occurrence at the burnt-out factory, but no one had investigated this until now.

Inspection of industrial units by the provincial labor department was mandatory until 1997, when it was banned following pressure on the government by powerful industrialists in the country, according to the Pakistan Institute of Labour, Education & Research. Though hundreds of factory accidents occur every year, this tragedy caused the most casualties in a single industrial incident.

Anis-ul-Haq, secretary of All Pakistan Textile Mills Association, said that bigger mills that supply to reputable brands and importers have to comply with international safety standards and are regularly audited by importing companies. Though this garment factory exported jeans and other garments to the U.S. and Europe — it could not be learned what brands were involved — it was a smaller factory that apparently was not monitored closely.

Pakistan is the fifth-largest supplier of textiles and apparel to the U.S. In July, combined imports from Pakistan rose 0.64 percent compared with July 2011 to 231 million-square-meter equivalents. Pakistan is the third-largest supplier of textile imports to the U.S., which fell 0.19 percent to 174 million SME in July compared with a year earlier. Apparel imports rose 3.28 percent to 57 million SME.

The Human Rights Commission of Pakistan issued a statement calling upon the government to ensure safe working conditions and effective monitoring. President Asif Zardari has ordered an investigation into the affair to be conducted within the week. The Sindh provincial government is also conducting an investigation into the cause of the fire, the building’s civil defense system and the extent of the owner’s negligence. In addition, Sindh Governor Ishrat Ul Ebad said negligent officials of Sindh Industrial Trading Estate, a Karachi industrial zone, the labor department and civil defense will be held responsible.

Chief fire officer Ehtisham-ud-Din told reporters that the large number of casualties was due in large part to the fact that there were no emergency doors, no extra stairways and most of the people died of suffocation in the locked, smoke-filled basement. The building was also in poor condition, with cracks developing after the fire erupted, which slowed the rescue effort. Fire trucks and cranes could not easily gain access to the building. Fire-safety issues are common in Pakistan, where alarms, sprinklers and fire exits are a rarity in most buildings.

Because of thefts, the owners had all exits locked and there were bars on the windows, leaving 600 trapped men and women inside. To escape the fire that raged for 15 hours, workers, including a 27-year-old pregnant woman, threw sewing machines at the windows, tried to squeeze between the bars and jumped out of second and third floors of the buildings, causing broken bones and other injuries. Those in the basement did not even have that chance.

The fire started when a boiler exploded after the power generator failed to turn on. Severe power shortages require back-up, on-site generators that frequently cause major home and industrial fires. The flames then ignited stored chemicals, garments and packing materials. Many recovered bodies were charred beyond recognition, necessitating DNA testing for proper identification. Rescuers are still searching for bodies, and relatives of missing workers are going from hospital to hospital in search of them. The administrative building for the factory was undamaged.

The Sindh and Punjab governments have promised financial compensation to families of victims, and Karachi Electric Supply Co. has waived their outstanding bills as a goodwill gesture. It was also payday at the mill in Karachi, and the families have been anxiously waiting for the paychecks.

The International Labor Organization on Wednesday called for Pakistan to take concrete steps to improve safety standards in the country following fires in Karachi and Lahore. The ILO said the fires highlight the lack of workplace-safety measures.

“We were shocked by the news,” said Seiji Machida, head of ILO’s SafeWork Program. “Protection of workers’ safety and health is a fundamental human right. We need to reinforce measures to protect workers’ lives from hazards in the workplace.”

Charles Kernaghan, executive director at the Institute for Global Labor and Human Rights, said, “Once the outsourcing became almost complete, especially with garments and shoes, everything started being produced in extremely underdeveloped countries that never have had anything remotely that resembled what the U.S. created in the 1950s — with solid unions, strong laws, constant investigations and serious labor inspectors. Now we have moved into a model of production and sourcing which can’t be controlled.”

Kernaghan said until there is more transparency and disclosure to U.S. and European companies placing garment and footwear production in factories stretching from Bangladesh to Pakistan and China, poor working conditions and more tragic fatalities will continue.

Neighboring Bangladesh has also had its share of factory fires and labor unrest.

In March, PVH Corp. entered into a “joint memorandum of understanding” with a group of nongovernmental organizations and international and Bangladeshi trade unions, committing $1 million to underwrite a program on improving fire and building safety in Bangladesh’s apparel factories. The moves came in reaction to a 2010 blaze at a factory in Bangladesh that killed 29 apparel workers making goods for the company.

The agreement with the Clean Clothes Campaign, Worker Rights Consortium, the International Labor Rights Forum, Maquila Solidarity Network and unions recognizes the need for the Bangladeshi government, industry organizations, brand owners and retailers and labor to work together to create a safe and sustainable work environment within the Asian nation’s industry. It establishes a two-year program to establish an in-factory training program, create factory health and safety committees, reviewing existing building regulations and enforcement, developing a worker complaint process and mechanism for workers to report health and safety risks and advising a chief inspector.

Clean Clothes Campaign international coordinator Ineke Zeldenrust said of the latest incident, “These deaths could and should have been avoided. Emergency exits were absent or locked, and workers were trapped. This is the usual pattern. It is well known that many work places are unsafe, and that workers in key producing countries risk their lives on a daily basis producing clothes for Europe and the USA.”

CCC urges brands as well as governments and employers to upgrade the buildings and train workers and management. Most importantly, it said they should ensure that workers can freely organize and speak out when safety regulations are ignored. Victims also need to have access to the best possible medical care and to fair compensation, CCC noted.

In Cambodia, a new report, “10 Years of the Better Factories Cambodia Project,” concluded that while conditions over the decade have improved, “the BFC program has not yet turned — as some have suggested — Cambodia into an ‘ethical sourcing option’ for many global buyers and consumers.” BFC was created in 2001 as a result of the U.S.-Cambodia Textile and Apparel Trade Agreement to create incentives to improve labor rights.

“It must also be stated that the BFC’s program must be improved if it is to have a lasting effect,” the report said. “Unfortunately, unions continue to face difficulties in their collective bargaining activities; the minimum wage not only lags far behind current inflation rates, but also fails to meet the basic needs of workers and their families; workers are forced to work excessive overtime; they suffer severe health and safety problems, which are most dramatically exemplified by the mass fainting phenomenon. Meanwhile, employers increasingly use fixed-duration contracts to avoid paying maternity leave benefits to female staff (the vast majority of workers) or to discourage workers from joining unions. Unionists are often confronted with dismissal, harassment and even violence.”

“At some point, maybe 100 years from now, something like this has to be implemented,” Kernaghan said. “Without it, nothing will change.”

Stephen Lamar, executive vice president at the American Apparel & Footwear Association, said the industry has made improvements in working conditions with its corporate social responsibility programs and audits and inspections of factories worldwide, but more can be done.

“Any time these kind of tragedies occur, people need to step back and ask their own CSR [corporate social responsibility] people to check to make sure they don’t have these kinds of problems and that controls are in place to prevent them,” said Lamar. “It really reminds people that CSR is an ever constant thing. You can never take it for granted. You have to constantly spend time on it, whether you are doing audits, training people or setting up factories.”