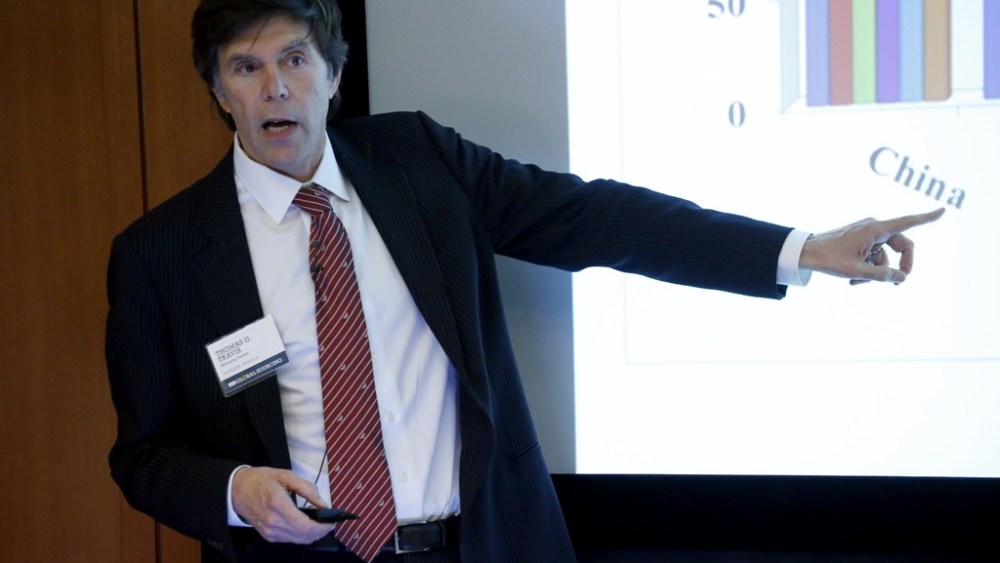 Whether President Obama is reelected or Republican challenger Mitt Romney takes the White House, companies need to pay close attention to their policies on trade because they impact where products are made and the cost of producing them, said speakers at the WWD Global Sourcing Forum here last week.

“You can be an adventurer, you can be proactive or you can stand by — as long as you monitor these trade developments because they matter,” Travis said. “They distinguish who wins and who loses. The one thing that’s constant about trade policy is that it’s always changing and it changes with specificity to your product. The game is played internationally in places like Geneva [home to the World Trade Organization], and Brussels [headquarters for the European Union], and in Washington, and in lots of different capitals.”

Travis documented that with every free-trade agreement the U.S. ever implemented, commerce increased between those countries “like night follows day.”

“What matters to you is if you can craft an advantage,” he said. “FTAs represent change and the statistics show that the opportunities are there. The Trans-Pacific Partnership represents change. It’s a big deal because it involves 11 countries.”

Jerry Cook, vice president of government and trade relations at Hanesbrands Inc., was critical of government regulations and the provisions he said inhibited commerce in trade pacts.

“Government can be an assister or government can be an inhibitor,” Cook said. “You cannot forget in your supply chain operations the regulatory cost of moving product and how it affects how fast, how efficient and how effective you can deliver product.”

Kevin Burke, president and chief executive officer of the American Apparel & Footwear Association, said, “As an industry, we have to band together to interpret what we have to work on in a more efficient way. These are products that we all wear that have to navigate a process — a public policy process and a political process — before they get to the shelves so you can buy them. Right now, factory costs dominate the concerns of all of our member companies. They say five years from now, the biggest concern is [going to be] government regulations.”

Burke said 80 percent of AAFA member companies see their growth abroad, with the average firm now in 25 countries. In selling globally, companies said the biggest challenges are in government restrictions, competition and supply chain management. Burke said, “As far as market access, the only way U.S. brands are going to make it around the world is if those barriers are dropped. One big barrier is protectionist policies in those countries.”

The executives also discussed the presidential candidates’ stances on trade policy and their potential impact.

Travis noted that when Obama ran for office in 2008, he said three things: “He said he would declare China a currency manipulator, he would make enforcement of trade laws and stipulations in agreements a top priority and he would ‘make sure that consumer products coming in from China were safe.’

“So, he didn’t declare China a currency manipulator…but there have been consistent statements from the administration about the [currency] imbalance,” Travis said. “On trade cases…there have been increases in the number of trade cases filed against China [in the WTO] and they’ve prevailed most of the time. Romney has said things that are pretty protectionist comments from a Republican. He has said he was going to designate China as a currency manipulator and said they cheat and he was going to punish them. It may be just political rhetoric and it may not be, it’s hard to tell. With Obama, he’s been President for four years, he’s got a record and generally he’s moved in that direction. He’s increased the consequences of doing certain actions. He’s brought a lot of cases compared to his predecessor.”

He noted that if Obama wasn’t behind the TPP, it wouldn’t be happening.

“Presidents do matter when it comes to trade policy,” he added.

Burke said, “Most people would look at this as a classic liberal-versus-conservative match-up. President Obama is pro regulatory — there isn’t a regulation that President Obama doesn’t like. Romney is very antiregulation — he basically would like no or little regulation. Both proclaim to be free traders. Obama would say we got Colombia, Korea and Panama [FTAs] done and that he’s negotiating TPP.…Romney says he’s free trade, but then he says the first thing he wants to do when he is in office is beat the you-know-what out of China…over the currency issue. I don’t think he’s going to do that if elected because when the Chinese don’t show up at the next Treasury auction, watch the price of Treasury notes go up and watch the financial impact of that.”

Burke’s prediction last Tuesday: “Obama wins reelection, the Democrats retain the Senate by a slim margin and Republicans retain the House, but lose a bunch of Tea Party seats. I think there’s an angry electorate out there about things that are just not getting done.”

No matter the outcome, Cook said, “Those that win will have figured out how to run through the maze and understand what’s coming. There’s going to be less interest in changing legislation and more interest in understanding and figuring out how to manage what’s out there.”

Travis detailed how countries with which the U.S. has trade pacts are gaining import market share in key categories, and that if TPP is signed, those nations will also see increases, notably Vietnam and Malaysia.

“We’re not going to send U.S. fabric to Vietnam because it would be cost-prohibitive, but we might send U.S. yarn to Asia because U.S. yarns are incredibly competitive because of our cotton [supply and cost], the [low] price of power, [low] price of water — all those things matter and American yarns are being exported in huge quantities,” he said.

TPP is also going to be important as an alternative to China, where manufacturers are dealing with rising commodity prices, increased cost of production, currency inflation, consumer product safety and corporate social responsibility issues, and changes in the population mix causing labor shortages, Travis noted.

One of those Asian alternatives is Sri Lanka. Janaka Ratnayake, chairman and ceo of Sri Lanka’s Export Development Board, said, ‘We think we can be the gateway to the entire region. We have FTAs with India and Pakistan. We have 30 years of production experience in the industry.”

“All 300 factories in Sri Lanka are on one floor, there are no multifloor facilities,” he said, referring to the recent factory fire in Pakistan where some 300 people died in a multifloor plant. “We give the highest priority to worker safety and worker health. We need to look after these people. We are very serious about this.”

Channa Palansuriya, deputy chairman of Sri Lanka Apparel and chairman of denim manufacturer Orit Apparel, in a conversation with Evan Clark, WWD deputy editor, business, said, “I thought that after losing quota in 2005, we would be off the sourcing map. But I’m proud to say that since then we’ve almost doubled exports. We are a small nation of only 20 million people and our capacity is very limited. We are not trying to expand our capacity. Our strength is in building partnerships.”

As for the sticking point of whether TPP will include a “yarn-forward” provision that would only qualify goods for duty-free status if the yarn comes from one of the signatory countries, which so far has been the administration’s stance, Travis said, “There are approaches that will recognize U.S. content wherever it is [in the makeup of the garment] and that’s probably where we’re headed in solving the yarn-forward controversy.”

If not, he said, “They’re going to take away one of your most fertile, balanced approaches and they’re going to take you out of ASEAN, and that’s not OK. The idea that you’re going to create a free-trade agreement and try to pretend that Vietnam doesn’t exist in balance with China, Thailand, Cambodia and Laos, that you cannot use inputs from that region,” isn’t practical and will diminish the chances of the pact having any meaning for increased market access for U.S. goods and for it to act as an alternative and balance to Chinese production.

ASEAN, the Association of Southeast Asian Nations, consists of 10 countries, four of which — Vietnam, Malaysia, Singapore and Brunei — are also involved in the TPP talks, along with the U.S., Australia, Chile, New Zealand, Peru, Canada and Mexico.

Hanesbrands’ Cook said, “If we allow bad rules of origin to develop [in TPP], we’re wasting an opportunity.”

He noted that the language crafted in trade agreements is important and can have long-term effects even if political ideologies change. Cook cited examples such as cotton subsidies implemented in the late Sixties and yarn-forward rules that exist in most U.S. trade deals as having negative connotations far past their origins.

Sylvia Reyes, director of apparel and textiles sourcing at Proexport Colombia, said even though the U.S-Colombia FTA was stalled for several years, “we’re already seeing business growing rapidly since the May 15 implementation.”

“We now have stability instead of wondering if our free-trade status was going to be renewed every year,” Reyes said. “Colombia is a good partner. We offer competitive labor prices, strong production capabilities, value-added expertise and design ability. We have a one-stop-shop approach, from raw materials and knits to jeans, sportswear and home textiles and a lead time of less than a week to West Coast ports. Complying with corporate social responsibility and environmental standards is something that we have had over many years, but have become even more important. Colombia is also an energy producer and supplier. I think we are also benefiting from the movement to re-shoring in the Americas.”