Protests and strikes shut down the fashion industries in Cambodia and Bangladesh on Monday.

By Mayu Saini and Dene-Hern Chen
with contributions from Cheng Sokhorng
on December 30, 2013
View Slideshow 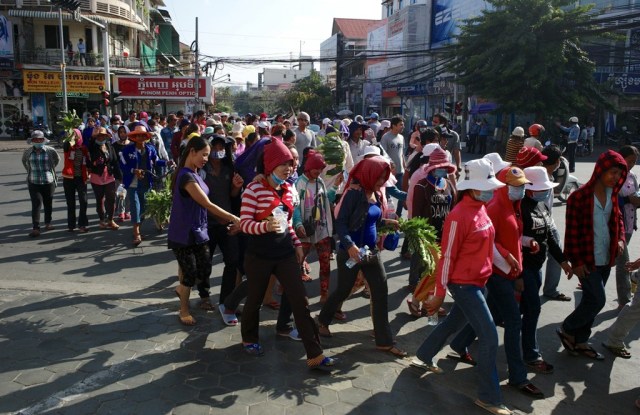 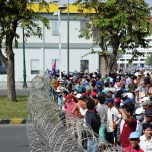 Two of the world’s largest apparel manufacturing countries remained in chaos Monday as protests and strikes shut down the fashion industries in Cambodia and Bangladesh.

This story first appeared in the December 31, 2013 issue of WWD. Subscribe Today.

The protests were driven by demands for change in the governments of the two countries, but also reflected growing pressure for increases in the minimum wage in their apparel industries, which is one of the key manufacturing sectors for both nations. The demonstrations in Cambodia and Bangladesh again put the focus on what has been a key issue for the global fashion industry this year, and one that is expected to remain in the spotlight in 2014: working conditions in factories in low-cost countries.

In Cambodia, garment workers on Monday continued the nationwide protests involving a higher minimum wage that began last week and ballooned on Sunday to tens of thousands of people at a rally held by the opposition Cambodia National Rescue Party. A meeting was scheduled for Monday between the Garment Manufacturers Association in Cambodia, which represents the country’s exporting factories, and independent unions to discuss the minimum wage, but GMAC refused to attend.

Since the government said last Tuesday that the minimum wage for Cambodia’s garment workers would be increased by $15 to $95 a month in April, workers and unions have been holding mass demonstrations to protest the amount, which they contend should be $160 a month.

As a result, garment factories across the nation have shuttered, bringing the $5 billion industry to a standstill. In a statement Monday, GMAC accused six independent unions of destroying factory property, inciting workers to protest, and preventing the 600,000-strong workforce from going to work in the factories.

“[O]ur industry is unable to continue operations given the current situation,” the statement said, adding that GMAC would like a safety guarantee to factory properties and their workers before resuming work. “All the six unions must be responsible for the destruction of the factories and manufacturers, as well as the lost wages of the workers, their unemployment and the loss of investment.”

GMAC chairman Van Sou Ieng on Monday estimated that the industry loses $10 million to $15 million a day from the halt in operations, and he placed the blame entirely on the unions.

“Why should we attend [the meeting] when we are threatened by violence and we are without protection?” Sou Ieng said. “The worst is that the credibility of Cambodia as a supplier country will be affected. People might not want to continue to place orders in Cambodia because they are not sure if we can deliver.”

The Ministry of Labor on Monday ordered all workers and manufacturers to resume factory operations by Thursday and said the minimum wage amount will remain at $95.

“[The protest] has seriously impacted the workers’ benefits and the state economy,” the ministry said. “Competent authorities will take measures seriously through the law to the people who still incite and cause problems to the employees and manufacturers.”

In a second statement released in the evening, the ministry ordered all unions to stop leading the nationwide strike immediately, warning that legal action will be taken up against them.

Earlier in the day, thousands of workers gathered in front of the Ministry of Labor at the capital to protest before marching down traffic-congested Russian Boulevard. They were greeted by some 1,000 riot police officers who formed a human barricade around the government buildings that serve as Prime Minister Hun Sen’s office. After a brief standoff between both sides, the officers pushed the workers down the block by marching forward and rapping their batons on their shields.

Pring Vannak, 28, who sported “We Need $160” stickers on her sun hat, remained unafraid of the officers. As a seamstress in the Best Tan Garment factory, Vannak said she takes home about $130 a month after working overtime.

“I will keep protesting until we get what we deserve,” she said. “If I don’t demand for my rights, who will do it for me?”

Kong Athit, vice president of the Coalition of Cambodian Apparel Workers Democratic Union — one of the six unions singled out in GMAC’s statement — reiterated that the unions are not mobilizing the workers.

“They are aware that they are being exploited by the companies, so they are standing up for themselves,” he said. “We must all sit down to find the best solution for this conflict.”

Cambodia is one of the top-five apparel suppliers to the U.S. Apparel imports from Cambodia fell 14.15 percent to 99 million square meter equivalents in October compared with October 2012.

In Bangladesh, the capital of Dhaka continued to be in upheaval following calls by government opposition parties for businesses and the city itself to remain closed in protest against the ruling Awami League. The opposition parties have organized a string of protests and marches over the last few months, seriously impacting the ability of the nation’s apparel industry to fulfill orders.

Police continued to fill the streets of Dhaka on Monday. The army guard has been called in to help maintain law and order 15 days before the election on Sunday for the 10th parliamentary election.

The 18-party opposition coalition led by the Bangladesh Nationalist Party has refused to participate in the election. Instead, it has called for extensive protests and the country remained on high alert as BNP leader Khaleda Zia was blockaded into her home even as protesters gathered in Dhaka to march for the last three days.

Meanwhile, exports from the garment industry have continued to be a focus as it accounts for 80 percent of the exports from Bangladesh, at $22 billion, and employs more than 3.8 million workers. Bangladesh is the world’s second-largest apparel manufacturer after China, with imports to the U.S. rising 42.5 percent in October to 152 million SME compared with a year earlier.

Officials of the Bangladesh Garment Manufacturers and Exporters Association told WWD that they were struggling to ensure that orders could be met, although December has been a hard month. Garment factory owners were now paying major penalties because of the political situation, the BGMEA said. “Cancellation of orders worth $3.77 million has happened [so far] in this month alone,” a BGMEA official said. Citing a quick survey of a small number of factories, BGMEA statistics showed garment factory owners paid penalties on delayed shipments totaling an additional $7.83 million.

The concern that has surfaced again is the political blockades and shutdowns of the city that have cost the factories more than $2 million in the month of December in lost work, on top of the penalties factory owners have paid.

The political chaos comes on top of some remaining dissatisfaction among workers over the government-mandated increase in the industry’s minimum wage, which took effect Dec. 1. The minimum wage was increased 77 percent to 5,300 taka, or $68 at current exchange, a month from $38 monthly, but this was far below the level workers demanded of 8,112 takas, or $102. The minimum wage in other major garment-exporting countries also is much higher, such as India ($71), Sri Lanka ($73), Pakistan ($79), Vietnam ($78) and Cambodia ($80).