Few Canadian apparel manufacturers have been able to resist the lure of low-cost foreign factories to produce their products. 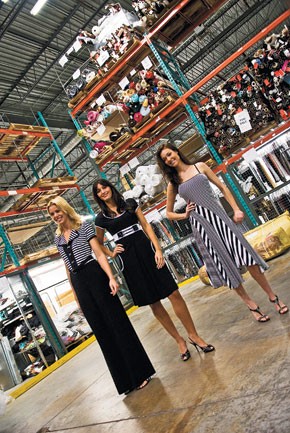 MONTREAL — Few Canadian apparel manufacturers have been able to resist the lure of low-cost foreign factories to produce their products.

For most firms, importing was a survival strategy in a competitive global market. But two companies that have hung tough are Montreal’s Joseph Ribkoff International and Vancouver’s Oceanic Sportswear.

In the past five years, Canada’s trade deficit in apparel has nearly doubled. Exports fell to $1.65 billion in 2007 from $2.71 billion in 2003, while in that same time period imports grew to $7.86 billion from $6.1 billion. Half of the apparel trade deficit is with China.

It’s been a shifting environment for the domestic industry, according to Bob Kirk, executive director of the Canadian Apparel Federation, an Ottawa-based industry association.

“A few years ago, there was a line drawn in the sand,” Kirk said. “You were either a manufacturer or importer or possibly both. But there were a lot more in one camp or the other. Now, a lot of people are mixing up what they do here and what they do abroad.

“Due to general global pressures, there’s a lot more importing going on today. But people are trying to attain that magic number of 20 percent domestic manufacturing and 80 percent importing to retain flexibility. The big challenge for importers is they need more warehousing and need to carry debt for a longer period.”

Whether a 100 percent domestic manufacturer like Ribkoff or a combination of both like men’s wear firm Peerless Clothing of Montreal, Kirk said the challenge for either camp is to have a clear business model.

“The dilemma is to manage change from being purely a domestic manufacturer to becoming involved in the import market,” he said.

Ribkoff manufactures mid- to high-end dresses, separates and sportswear for more than 3,000 accounts in 22 countries around the world. Oceanic makes sportswear and yogawear from better and heavier fabric than its competitors, with 80 percent of sales in Canada and 20 percent in the U.S., including some private label work for Eddie Bauer and Costco.

Celebrating 50 years in business last November, Ribkoff flirted with manufacturing its products in Hong Kong and China about 20 years ago, but it didn’t last.

“We were doing about 10 percent of our production there for about six years, but retailers were asking for Made in Canada goods,” said owner Joseph Ribkoff. “Retailers today still feel it’s special to be able to buy something made in North America. I was also traveling to the Orient two to four times a year for about seven years and thought there’s got to be a better way, so I developed a factory here. It was a good business decision because I got our pricing right and we were able to control our destiny.”

Ribkoff said some of his competitors are strapped for merchandise because China is so overloaded with work and has a labor shortage.

Although his margins are lower by manufacturing locally, he gets it back through quick turnarounds, smaller runs and better customer service.

“I’ve also become a better businessman,” Ribkoff said. “My bottom line today is better than it was 10 years ago.”

Ribkoff’s retail prices range from $100 for pants or a top up to $250 for a dress or slightly higher in Europe. He manufactures over one million garments a year and has sales of over $80 million.

His only concern is a lack of local designers and pattern- makers, so he operates his own in-house school to develop the necessary talent.

Up until about five years ago, Oceanic owner Simpson Ma was manufacturing all products domestically, but has since reduced it to 70 percent and may reduce it even further, but not below 50 percent, if possible. He currently produces 3.8 million units a year in Canada, which could drop to 3.2 million within the next three years. His high-volume, low-margin business generates $70 million in annual sales.

“We have to reduce capacity because of a lack of skilled people coming into the business,” Ma said. “I initially went offshore for all products, but it was a disaster because there’s so much competition. So I decided to become a 100 percent domestic manufacturer. But my woven shirts and woven pants business wasn’t cost-effective, so I moved those operations to China.”

As a result, he enjoys a 25 percent margin from his offshore production versus 15 percent from domestic operations.

“I know I’m making less of a margin here, but my customers appreciate the fact that we still produce domestically and my customer service gives me a competitive advantage,” Ma said. “My new business model is not to produce cheap products because there is always someone who can produce them cheaper. Instead, I’m focusing on costs and product innovation.”