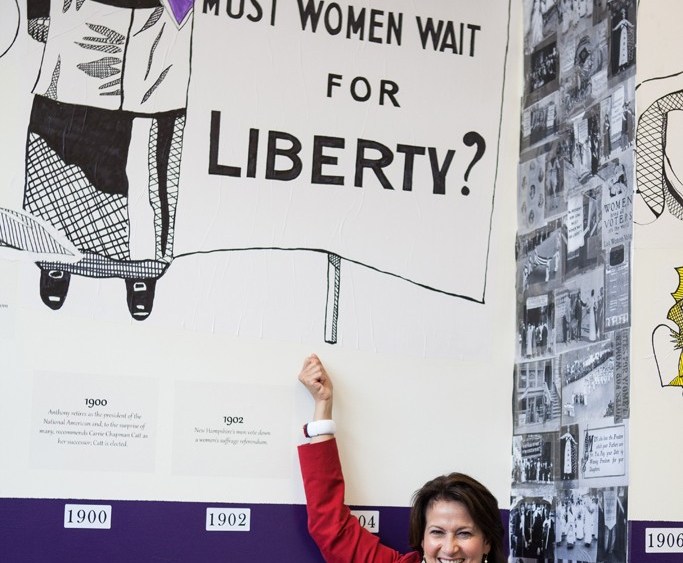 TAMPA, Fla. — Anita McBride, former chief of staff for Laura Bush and currently an executive in residence at American University, sat down with WWD on the second day of the Republican National Convention here for a discussion on a variety of topics, ranging from Ann Romney’s style, the importance of fashion and style in politics, the convention’s message to the so-called “war on women,” the shortcomings of the Obama administration and what Mitt Romney needs to touch on in his nomination speech tonight to get the bounce he needs to a White House victory.

WWD: What role does style play in politics, and where does Ann Romney fit in to that?
Anita McBride: It’s a reality. We want our first lady, maybe some day a first spouse, to represent us beautifully. We have certainly seen that with Mrs. Obama and the focus on fashion, whether she wanted it or not, because she is a beautiful woman and enjoys wearing clothes and is comfortable in her own skin. I think people like that about her. I think Mrs. Romney, too, is comfortable with who she is.

WWD: Do you feel if Mitt Romney wins, she’ll be the same kind of champion that Mrs. Obama has been of young American designers?
A.M.: I don’t know. I’m sure the campaign doesn’t want to be presumptive that she will be the first lady. I think she certainly has style. It is a style that fits her. What designer she uses, I’m not sure. I think the thing that is really important is that first ladies are best when they are true to themselves, when they are authentic, when they don’t try to change to be someone else. She has a style that fits her, and I’m sure that’s what she’ll continue to do. It’s very classic and elegant. I think how she dresses lights her up.

WWD: What did you think of Ann Romney’s red dress? (An Oscar de la Renta she wore during the prime-time speech on Tuesday night.)
A.M.: Nancy Reagan really set that tone — the Reagan red. You’ll never be lost in a crowd. She really did radiate a security, a comfort level and a real resilience, too.

WWD: There has been talk on the Democratic side of a war against women [by Republicans]. Do you believe there is a war against women, and why are they putting that idea forth?
A.M.: I don’t think there is. I think it really is something that has become good campaign rhetoric but bad policy to be pushing this kind of fear factor for women. It’s a good sound bite but bad policy. For all of the experience [House Minority Leader Nancy Pelosi] has in the government and all the growth she has seen for women and known and presided over, to perpetrate that this war on women exists, we are setting ourselves back. Why are we doing that? It’s very backward looking. It’s not forward looking. We fought so hard to have a seat at the table, the economic table, the legislative table and in areas of social issues.

WWD: Do you feel that the convention theme, “A Better Future,” has been delivered successfully, and will it give a bounce to Romney?
A.M.: We’ve just had one day of the convention. We’ve had two critical speeches in prime time…that were really important for very different reasons. Mrs. Romney’s speech was intended to, of course, address Mitt Romney as a man and a leader, and then Gov. [Chris] Christie was intended to address the most critical problem we face and who is in the best position to do something about it. I thought his line that people will remember is that the Democrats “whistle a happy tune while driving us off the fiscal cliff,” that is really telling the truth about the state our country is in right now.…We need to address the serious problems at hand. It is the budget and deficit, and it is getting people back to work. Those are central to the health of our country and to our standing in the world.

WWD: What does Gov. Romney need to do to bring his message home in his speech on Thursday and hit it out of the ballpark?
A.M.: He has to drive home exactly what it is that he would do on Day One and stay focused…that if we don’t protect our economy, there is nothing, first or foremost, more important. I think he has to talk more about the issues he has raised, such as energy independence.…Another priority is to review these regulations that have really hurt businesses and why investment in the private sector has stalled, which he really believes is due to overwhelming regulation, which he would know as a businessman, and really look at those strongly on Day One. I think those are definitely two big priorities. But the other thing he has to do…is to make Americans believe he can do it. He has to inspire…and that is as important as knowing how to run a business, having the character to be a leader on the global front.