Investment in the $3 billion industry could suffer due to backsliding of democracy, the EU ambassador says.

By Dene-Hern Chen
with contributions from Aung Naing Soe
on May 31, 2018
View Slideshow 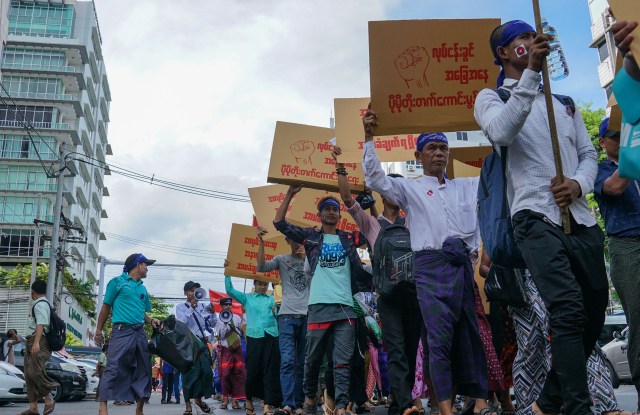 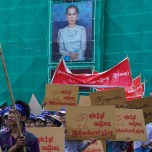 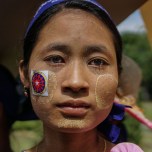 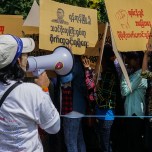 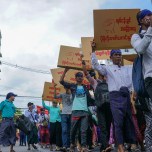 YANGON, Myanmar — Myanmar’s garment sector may be booming, but the Rohingya humanitarian crisis in northern Rakhine State and issues over the minimum wage threaten to derail the industry.

Last week, these issues loomed large over discussions about the sector during the country’s first Buyers’ Forum. Attended by 18 international clothing brands sourcing from Myanmar — including H&M, Gap, Adidas and Li & Fung — participants homed in on how Myanmar’s duty-free access to Europe’s markets has augmented its growth substantially since it was reinstated in 2013. Last year, the industry pulled in $3 billion in exports and it employs roughly 700,000 workers — though the government hopes to reach an employment rate of 1.5 million jobs by 2020.

Kristian Schmidt, the EU ambassador to Myanmar, said at the Buyers’ Forum that the regional bloc is the “fastest growing and largest export market,” with last year’s imports increasing by 62 percent to S1.27 billion.

According to statistics provided by the Myanmar Garment Manufacturers Association — which represents more than 500 factories — apparel exports to the European Union have soared since 2013, when exports were about $171 million. It jumped 81 percent to $310 million the following year, 50 percent to $465.9 million in 2015, and then rose by 62 percent to $758.5 million in 2016. (Following a close second is exports to Japan, which pulled in $651.9 million in 2016.)

But the ambassador’s speech also alluded to recent problems faced within the country, including the jailing of two Reuters reporters and the military’s security offensive in Rakhine State, which resulted in almost 700,000 ethnic Rohingya Muslims fleeing to neighboring Bangladesh.

The UN has previously described the events surrounding the military offensive as a “textbook example of ethnic cleansing” while a UN top official has said “elements of genocide” against the Rohingya cannot be ruled out.

Schmidt brought up that duty-free access to the EU was “neither irreversible nor unconditional.”

“We are now following developments in Myanmar closely, including on freedom of media, the right to peaceful assembly, the peace process, respect for the rights of ethnic minorities, and the situation in Rakhine State,” he said. “Honest business will thrive in a democracy. If you start sliding back on democracy, trade and investment will also suffer.”

In an interview with WWD, Schmidt struck a more conciliatory tone. “It is important that we don’t lose hope. We said we would support the country’s democratic transition and as we here deal specifically with the garment sector, it is one of the successes of Myanmar’s return to democracy,” he said. “It created hundreds of thousands of jobs for women, so I would hesitate a lot before returning to that sanctioned regime because it would not hit people who are responsible for what is happening in Rakhine State.”

Schmidt added that it is important to communicate to European consumers that the Rohingya crisis and the “Made in Myanmar” clothing they purchase in high-street stores as being completely separate issues. Already, he said, tourism in the country has been hit by these allegations of genocide among European leaders.

“European consumers care about it,” Schmidt said. “Tourism is already suffering in so many ways, the damage done to Myanmar’s reputation does not require EU sanctions because consumers and tourists are making their own decisions. We have tried to explain that the government of Myanmar.”

While head of state Aung San Suu Kyi has remained silent on this issue, a Ministry of Commerce official said at the forum that the military’s reaction was provoked by attacks of the Arakan Rohingya Salvation Army — an insurgent group that targeted military and police outposts last year. Critics have said the military’s reaction was outsized compared to the ARSA attacks.

“They are attacking our country, our people — we must fight them. We don’t fight the people, we just fight the terrorists only,” said Aung Soe, director general of the ministry’s trade promotion organization. “Whatever happened there, we want to maintain, to improve the situation. The politics just created a bad reputation, a bad image for Myanmar. It is not good for the economy and business.”

Last year’s export figures might seem robust but an official from the American Apparel & Footwear Association, which represents more than 1,000 retailers and brands, warned that orders from their members from Myanmar have slowed due to the crisis. In 2016, apparel and footwear exports to the U.S. totaled $90.8 million, according to MGMA figures.

“Dismissing reports of genocide or ethnic cleansing with claims that the stories are ‘made up,’ without allowed the international community to verify, is concerning,” said Nate Herman, AAFA’s senior vice president of supply chain, in reference to Aung San Suu Kyi’s reported statements on the situation. “While still growing quickly this year, the pace [of orders] has slowed from previous years.”

H&M said government’s reaction to the crisis risks “further eroding business and investor confidence,” but the Swedish retailer — which sources from about 40 supplier factories within the country — will continue supporting the industry with its growth, calling it “the best way for us as a company to influence and promote the respect of human rights.”

“We also have a responsibility both toward the textile workers making our products and our suppliers who have invested in the textile industry during recent years,” said a representative from H&M.

Laura Wilkinson of Gap Inc. said the clothing brand, which was once lauded as the first American entry into the country, is only working with one facility, and has made it clear that “non-discrimination in the workplace is a non-negotiable condition of doing business with Gap Inc.”

While this new amount was announced in January, it has not yet been instated, said Wunna Soe, a labor rights activist from We Generation Network, which represents workers from factories across the country. He added that inflation over the past two years has diminished the worth of the Myanmar kyat.

“Now the inflation rate has increased and prices are going up, too. When the new minimum age is set, they should calculate inflation rate and prices,” he said. “We thought that the minimum wage should be over 5,600 kyat a day [or $4.13 a day].”

During a protest held on May Day earlier this month, 21-year-old garment worker Myo Pa Pa joined about 500 other workers to demand for this higher wage of 5,600 kyat a day, which would add up to less than $100 a month.

“There are students in my family and I have five family members and I am the only one working. It’s just not ever enough money,” she said, adding that while the situation for workers in Myanmar has improved, there are also some drawbacks, like the rising cost of food.

Su Su Lwin, a 33-year-old supervisor in a garment factory, agreed, explaining that she was taking part in the May Day march to advocate for colleagues that earn far less than she does. She currently gets about $235 a month, supervising tailors at Omni Fashion Myanmar Factory.

“But for the basic workers, they get even less. They just get about $79.62 a month, which includes overtime,” she said, adding that she wasn’t worried about the higher wage demand shutting down her employer. “I’m not worried because they are running such a large operation, not a small one. They should be able to cover this expense.”

During the Buyers’ Forum, Denis Schaefer, general manager from Walton HK Group — a trading company with investments in Myanmar-based factories — said the issue of the salary lies more at how rapidly it is risen over the last few years.

“The problem is not how high these salaries are, but how fast it is changing. In Myanmar since 2015, we have increased 1,800 kyat to 3,600 kyat, which is around a 100 percent increase. And now we have an increase of 33 percent,” Schaefer said on a panel on trade and business environment. “For the factories who are working on a [cut-make-pack] basis, it is very difficult to cover this cost.”

He also complained about the lack of transparency regarding the salary change, explaining that his company’s factories provide usually provide prices to buyers around six months before production takes place — making it difficult for factories to account for the higher wage raise cost down the line.

Khine Khine Nwe, MGMA’s joint secretary general, pleaded for the full support of everyone attending the Buyers’ Forum to understand how far Myanmar has come compared to the previous regime. She added that according to the country’s laws, the overtime pay is double compared to other countries, where it is normally one and a half.

“We need this kind of understanding from the buyers also. No employer in the world would like to see their workers leave the workplace….We want to care about our workers,” she said. “But if the workplace is not commercially viable, how can we do that? All these multiple holidays and the production issue — you have to pay us a little bit more…to cover that.”