Textile sector in Romania looks to move away from subcontracting model. 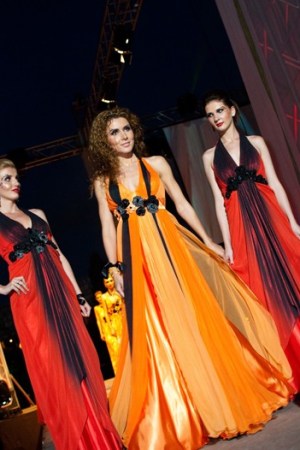 Hard hit by the global economic downturn and facing competition from Asian manufacturers, the Romanian textile industry is reinventing itself.

With foreign orders dwindling and local banks reluctant to lend, industry executives have been pushing the country’s 6,000 textile manufacturers and 2,100 footwear producers to launch their own brands and target the domestic market.

“The changing process of the Romanian textile sector is already under way,” said Maria Grapini, president of the Federation of Textile Industries in Romania. “There are many companies that have made the change from the lohn system to the creation of their own brands. In this way, they can gain some domestic and even international market segments.”

The lohn system is akin to outward processing, in which the buyer supplies the necessary materials to the producer, which only provides the labor and the workplace, after which the buyer re-imports the finished merchandise.

After establishing itself as a key manufacturing hub with the rise of the fast-fashion phenomenon, the Romanian textile industry went into decline after the liberalization of textile trade in January 2005, which allowed China unrestricted access to the world market and brought intense competition from low-cost manufacturers.

The damaging impact of Chinese competition was accompanied in the last year by the global economic downturn, which prompted foreign companies to reduce their orders, affecting manufacturers that don’t make clothes under their own brands.

In 2008, textile, garments and footwear production dropped by 6.2 percent, the third consecutive year of declines, which resulted in the layoffs of 60,000 industry workers. The number of job cuts could reach an estimated 300,000 by the end of 2009.

Business Monitor International, a market intelligence firm, said a shakeout of the sector is inevitable, with companies that can provide specialized skills and added value surviving the crisis caused by declining overseas orders and continuing competition from Asia.

This view is shared by Mihai Pasculescu, deputy president of the Federation of Textile Industries, who expects about 20 percent of companies in the lohn system will close as Romanian textile production drops around 20 percent this year. On the upside, he expects a 5 percent recovery in the domestic market.

Industry experts said this is a good time for the industry to restructure and adapt to the new order, responding to the crisis by opening the domestic market, which is already warming to Romanian brands.

“Romanian consumers have become keen on buying Romanian brands,” Grapini said. “They understand that Romanian products are in trend with international fashion and that the products are manufactured with high quality.”

To respond to domestic demand, some Romanian companies have started opening their own stores, initially in the country’s capital, Bucharest, but also in larger cities such as Iasi, Cluj Napoca, Timisoara and Constanta.

Although still relying on foreign orders, men’s wear manufacturer Niss Mode has begun producing its own collections, channeling 50 percent of its annual production to the domestic market, which it targets through a network of its own stores, as well as third-party distributors. It has also become a supplier of uniforms to the Romanian army.

Lingerie and swimsuit manufacturer Jolidon has gone even further, after creating a strong brand and a glossy image for its products. Through organic growth and acquisitions, the company has built an international footprint beyond Eastern Europe, with 35 stores in Italy and 10 franchised boutiques in France.

The establishment of a strong brand has become a priority for ambitious manufacturers and fashion designers in Romania that have adopted slick marketing strategies borrowed from international fashion giants.

Liliana Turoiu Udrea, a designer and entrepreneur who opened three boutiques bearing her name and holds regular fashion shows, has selected Romanian actress Monica Davidescu to be the image of her fashion house.

Udrea acknowledged that launching a brand and a store network is difficult in Romania because the stores are expected to be unprofitable at first and the fashion business requires balanced investments, given the risks involved in the current economic climate.

“I’ll try to get through this hard period, trying to find out my balance and develop my own brand,” she said. “I’ll open new shops and I am also going to develop my business in the franchising system. I’ll try to continue the promoting campaign in different ways in order to increase sales.”

The investment that several manufacturers have made in their image by establishing design teams and hiring marketing experts to promote their brands is only one part of the change sweeping the fashion sector in Romania.

The wave of shopping mall openings in the last couple of years has also given a boost to fledgling domestic brands as they try to grab market share from foreign competitors.

Udrea said although rents remain extremely high, mall stores are an important means of establishing powerful brands, “showing that we are competitive on the market, showing that our prices are competitive, that our collections sell, and that they’re in line with international trends.”