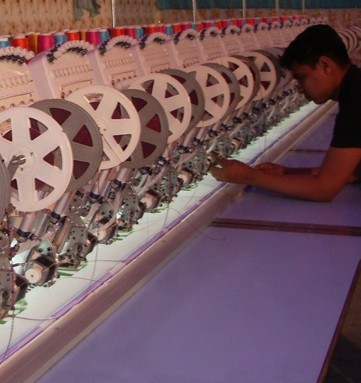 Asia remains the epicenter of apparel manufacturing, but within the region new manufacturing sources are emerging to challenge China’s dominance.

In a year that saw consumer demand plummet at a staggering rate, Vietnam, Bangladesh, Cambodia and India held onto significant market shares and in some instances were able to grab a larger piece of apparel exports.

Among the top exporters to the U.S., only Vietnam maintained an upward trajectory through the bulk of 2009, but industry sources pointed to Bangladesh, India and Indonesia as important emerging producers of textiles and apparel. The countries are well-positioned to begin growing once the global macroeconomic outlook stabilizes, sourcing executives said.

“If you are looking at emerging suppliers, defined as places where there’s growth…then there’s few and far between where there’s any growth [in 2009],” said Julia Hughes, senior vice president of international trade for the U.S. Association of Importers of Textiles & Apparel.

Cost, speed-to-market, experience and the availability of raw materials figure prominently in sourcing decisions and the countries that did well in 2009 offered companies opportunities their competitors did not, sources said.

Another draw was “countries that have an industry of scale, so you can have confidence that [the orders] you put there can be absorbed and produced,” Jaeger said.

According to the Commerce Department’s Office of Textiles & Apparel, Vietnam’s textile and apparel exports to the U.S. increased 20 percent for the first 11 months of 2009 to 2 billion square meter equivalents, or $4.9 billion. Vietnam is the fifth largest supplier of textiles and apparel to the U.S., but it is the second-largest source for apparel.

Exports to the EU from Vietnam rose 0.3 percent to 938.6 million euros, or $1.3 billion at current exchange, according to EU data for 2009. The benefits of doing business in Vietnam include access to inputs from China and the quality, needlework and skills that apparel firms want, said Jeff Streader, senior vice president of global sourcing for Guess Inc.

“We feel the capacity to produce a quality product exists there,” Streader said.

Vietnam’s textile and apparel export revenue in 2009 is expected to reach $9.3 billion, 3 percent higher than the previous year, according to a source in the Vietnamese government. Vietnam suffered smaller losses in market share during the recession compared with its Asian competitors. The end of a controversial U.S. monitoring program of Vietnamese apparel imports early last year helped stimulate further growth in exports and production.

Bangladesh was also not immune to the impact of the global downturn, but after a sudden intensification in the slowdown in export orders for apparel in the second half of 2009, sales started to pick up in the new year.

“As the recessionary situation is now improving in the main markets of the West, buyers are busy with deals for improved shipments from Bangladesh,” said Abdus Salam Murshedy, president of the Bangladesh Garment Manufacturers & Exporters Association, which represents more than 3,000 woven apparel factories.

Bangladeshi apparel manufacturers were able to eke out some market share gains. The Apparel Exports Promotion Council of India said shipments of apparel from Bangladesh surpassed those from India in the first nine months of 2009. Commerce Department data show India still outstripped Bangladesh in textile and apparel imports to the U.S., while Bangladesh saw a smaller decline in shipments.

Indian garment manufacturers expect business to improve in 2010 after a bruising 2009, but reform of the sector is as vital as a global economic recovery.

Plummeting demand in India’s main apparel markets — the U.S. and Europe — resulted in falling export sales. Hundreds of thousands of employees were laid off and scores of factories closed.

“Things are improving, no doubt,” said Surendra Jain, chief executive officer of Delhi-based Kuttu International, which exports to the U.S. and Europe.

But he said his company was “constantly looking for ways to cut costs” in its struggle to remain price-competitive with rival countries like China and Bangladesh.

India’s garment industry is largely constituted of small- to medium-size companies, like Kuttu International, which employs a staff of 60. Labor laws in India remain restrictive, and companies said they were looking to the government for support.

For U.S. apparel brands, the challenge in India is consistency, said Guess’ Streader.

Streader said lead times from India are also longer than those from China.

Despite successes in other regional countries, China is still the undisputed juggernaut of apparel sourcing. However, the global financial crisis, coming on the heels of policy measures that made producing textiles and apparel in China more expensive, proved even the world’s factory is not immune to serious economic woes.

Textile and apparel imports to the U.S. from China during the first 11 months of 2009 fell 1.4 percent to 19 billion SME, or $29.3 billion. Analysts and companies in China say this will be another year of restructuring and rebuilding, but with the knowledge that economic recovery is well under way, and the outlook is optimistic.

The textiles and apparel manufacturing industry was among the hardest hit through 2008 and 2009. By the time orders from the U.S. and Europe fell off at the end of 2008, thousands of factories had already shut down across southern China’s manufacturing zone — some bound for cheaper production markets, others driven entirely out of business.

The manufacturing industry is reemerging, however, leaner and potentially more competitive. Even though the government does not have direct plans to spend economic stimulus money on the industry, manufacturing orders have picked back up with the general global recovery and increasing domestic consumption.

Economic data released recently appear to support that theory. In December, China’s exports rebounded from a 13-month trend of declines to increase 17.7 percent over the same month in 2008. Overall, the country’s exports decreased 16 percent in 2009, but the holiday season bounce could indicate a brighter future for manufacturing companies lies ahead this year.

Several economists said the upward trend in manufacturing is directly related to a U.S. recovery, as it is the largest buyer of Chinese-made goods. And despite a series of high-profile trade spats, the U.S. and China remain economically reliant on one another.

“The U.S. and Chinese economies are just so interdependent,” said He Weiwen, a trade policy specialist in Beijing. “We’ve just seen some initial signs of recovery [in the import-export data] and that’s a good sign. We have confidence that in 2010 both economies and trade will continue to improve.”

For the most part, however, experts said China’s standing as the world’s top manufacturer is solid.

“There are a lot of people who don’t want to put all of their production into one country, but they continue to be the strongest contender,” Hughes said. “Other countries growing aren’t taking away from China, they’re taking away from other weak suppliers.”

Numbers show continued losses for most of the African countries that manufacture apparel, and despite a few bright spots in the Western Hemisphere, the volume of goods manufactured there has not kept pace with Asian producers.

Haiti was on track to emerge as a positive success story in the Western Hemisphere, but the massive earthquake that devastated the country on Jan. 12 derailed hopes for continued growth. Haiti’s exports to the U.S. grew in 2009, rising 6.8 percent to 217.1 million SME, or $469 million. But Haiti’s infrastructure and ports were severely damaged by the earthquake, leaving a much uncertainty over the future of its production capability.

— With contributions from Kathleen McLaughlin, Jahir Ahmed and Mian Ridge