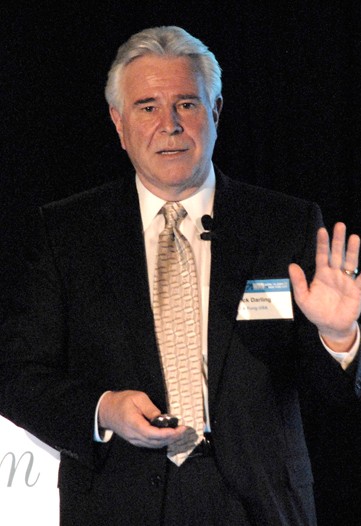 It’s a shrinking world — and one likely to get even smaller for manufacturers and retailers alike.

The description of the new landscape was one of many observations Darling and other speakers made to the more than 130 sourcing executives gathered in New York on April 15 for the WWD Sourcing & Supply Chain Leadership Forum. Speakers at the event focused on the key issues and trends likely to impact sourcing decisions over the next three to five years, including:

• Deflation
• An oversupply of the world’s apparel manufacturing capabilities, accentuated by falling consumer spending.
• The need to find value in the supply chain beyond simply capturing the lowest prices.
• The rising threat of protectionism at home and abroad.
• Managing risk in sourcing hot spots like Pakistan and Bangladesh.
• The necessity of brands and retailers to fully fund and incorporate corporate social responsibility programs.

Overriding all of these, however, was the continued recession and the question of when it might be over.

“I don’t think there’s an economist or a business person of significant stature that is right now thinking there’s any hope of a turnaround that we’re going to feel in 2009,” said Darling. “Generally, people feel this is going to be a tough economy.”

Crumbling global economies have brought the oversupply of the world’s apparel manufacturing capabilities into focus, an imbalance that had existed prior to the downturn and is expected to persist. The purchasing power of the U.S. market in particular has been hard hit and shows no signs of making a quick recovery. According to the U.S. Department of Labor, the unemployment rate reached 8.5 percent in March. About 5.1 million jobs have been lost since December 2007, and the number of unemployed Americans is upward of 13.2 million. More than half of the uptick occurred in the four months through March.

Darling said Li & Fung expects the next 18 months to be defined by deflation rates of between three and six percent.

As conditions have worsened, companies have returned their attentions to sourcing in Asia, according to Darling. Over the last several years, brands and retailers had been exploring alternative sourcing areas outside of Asia in an effort to maintain diversification and chase lower prices. In China, rising costs for energy and labor spurred a gradual shift away from the country. Not any longer.

“We see that trend now reversing fast in a significant way,” said Darling. “Frankly, to a big degree, it’s based on price.”

Darling said Asia’s prices have become more competitive over the last 18 months. He also contends that in some cases suppliers in the Western hemisphere missed their opportunity to seize a greater share of the market by failing to deliver on higher-quality items.

“What’s happened is a major change in attitude toward what we’re calling a flight to quality,” said Darling. “It’s not just the quality of the product but the quality in terms of how goods are made and how quickly goods are made. Factories and countries that may have been considered expensive are all being rethought and put in the mix in terms of what additional value they provide beyond price,” he said.

There is a shift going on within China as well, as the government looks to push its apparel manufacturing capabilities further inland. The Pearl River Delta area, once the heart of China’s southern apparel region, has seen thousands of textile and apparel factories shutter their doors since 2008, and more than 20 million jobs have disappeared. The Chinese government is in the process of transitioning the manufacturing base of the area to higher-level products like technology. Darling predicts Dongwan will eventually become China’s equivalent of Silicon Valley.

Improved safety, sustainability and environmental practices will play a prominent role in how brands’ and retailers’ assess value.

“I actually think [corporate social responsibility] is becoming very much an assumed trait,” said Darling. “The debates about whether it costs money or doesn’t cost money are no longer valid.”

Li & Fung is in the process of determining the carbon footprint of its factory base, a tall task for a company sourcing products in 80 countries with a network of 10,000 suppliers.

“I think sustainability will probably be, along with quality, the two main decision-making premises for most sourcing decisions that are going to be made over the next five to 10 years,” said Darling.

The rise of protectionism in the face of economic decline is also something he believes the apparel industry will need to confront, and not solely in the U.S. Darling perceives the proliferation of bilateral trade agreements as a different form of protectionism that will further complicate the industry.

“What [these bilateral agreements] are saying is that instead of participating in this global structure that was set out for the last 30 or 40 years…every country now is going to decide who it wants to trade with and what those rules are,” said Darling. “For those of us in the supply chain, that complicates our life more than quota did.”

NEW REALITIES
U.S. brands and retailers have failed to adjust their business models in the face of growing global economic turmoil, said Munir Mashooqullah, principal and founder of Synergies Worldwide, a sourcing company with more than 50 clients. As a result, these companies have not only been unable to respond to the slowing environment, but have left the door open for fast-fashion retailers to claim significant chunks of the market.

“We cannot let Zara, Uniqlo and H&M take over,” Mashooqullah said, noting those retailers succeeded because they first and foremost figured out how to sell fashions that shoppers want. “We should be worried.”

Despite the complex new realities in the marketplace, Mashooqullah pointed to some straightforward paths ahead.

“China is no more the cheap source,” he said, echoing Darling’s comments. “If you want to work in China today, you’ve got to go deeper into China.”

U.S. companies should also explore their outsourcing options while holding on to the creative aspects of the business they can do best, he said.

Given the credit squeeze and troubled banking sector, Mashooqullah also said importers should consider hybrid methods of financing, such as giving a vendor a 10 or 20 percent advance deposit and agreeing to pay the rest 60 days after receiving the goods. The risk, if it’s a good vendor, could be worth the reward, he said.

Ultimately, the economic upheaval in the marketplace could help companies with strong underlying businesses and good practices rise to the top.

“Reputation doesn’t matter,” he said. “[Disgraced investor Bernard] Madoff had a reputation. Reputation is what other people think of you. Character is what counts.”

RISKS IN PAKISTAN, BANGLADESH
Doing business in some of the world’s cheapest sourcing markets continues to carry with it greater risks. Pakistan and Bangladesh carry some of the lowest costs available, but each carries a distinct set of risks, noted David Schwarz, vice president of merchandise support and global sourcing for Redcats USA.

Redcats has moved aggressively to more direct sourcing over the last five years. The company has lowered its risk factor despite this. Still, Schwarz said in previous years Redcats used to have “one major critical issue a month.”

“Now we have one a week,” said Schwarz. “We’re doing a better job, but because of direct sourcing, the nature of our supply chain and our processes…and because of the increased volume, the frequency of the issues is up. I consider it normal.”

Bangladesh is Redcats’ third-largest supplier and, with labor rates as low as 22 cents an hour, represents one of the world’s cheapest sources for cotton-dominant products. The country also has a 40 percent poverty rate and has been hit by cyclones at an average rate of one a year for the past 100 years. Recently, Schwarz said the country’s government began offering millions of garment workers a 25 percent discount on rice, a subsidy that is expected to continue for several months.

“This is telling us how unpredictable and how vulnerable the emerging countries have become,” said Schwarz.

The situation is far more precarious in Pakistan, where the Taliban appears to be making increasing inroads. Schwarz said studies have ranked the country to be as risky as Iran, Nigeria and Venezuela.

“There’s almost a suicide bomb blast a week in Pakistan,” said Schwarz. “It’s increasing. Unfortunately it has been increasing year after year, and I don’t see it improving.”

Despite this, Schwarz acknowledged Pakistan is a top supplier for Redcats and that the “daily miracle” about the country is that product continues to be delivered on time and at a high quality.

A VISIBLE SUPPLY CHAIN
Even if owning the whole supply chain might be ancient history at many firms, brands still need to understand the influence their dollars have over suppliers, said Simon Constantinides, senior vice president and head of sales, trade and supply chain in the U.S. at HSBC Bank USA.

Constantinides calls this being “vertically aware” and believes it is vital to know how all the financial components of the supply chain work together. He advised companies to do their homework and be conservative in the down economy, but not greedy when it comes to negotiating with suppliers.

In addition to increasing visibility, working with fewer producers and being more important to them could also help companies when it comes to financing orders.

“We’re more comfortable, I think, in looking at companies that have a smaller concentration of suppliers, where they have a meaningful impact on that relationship,” Constantinides said. “If you’re only two, three percent of a supplier’s business, you don’t have the impact to be aware of what’s going on with a supplier.”

Kathryn Cullen, senior partner with consulting firm Kurt Salmon Associates, also encouraged brands and retailers to consider their businesses in a vertical manner. The firm’s research has also found that companies that take a greater role in developing product are more likely to succeed. Companies should look to move away from a focus on price and promotion in favor of developing an image of having more innovative product and a unique customer experience.

“That means they move from being merchants to also being product innovators,” said Cullen.

“One of the key things that our better retailers are doing is really looking at collaboration,” said Cullen.

Doing so may mean bringing these departments closer together geographically, she said. If done properly, product should improve while cost and time is removed from the development process.