‘Fairness in the Factory But on the Farm,’ Too, Textile Experts Say

In recentering those working in factories and on farms, what role do fiber and textile standards in the industry play?

Food and fiber systems are ripe for regeneration.

Investors who assume do-gooding in the distant apparel factories and farms within their portfolios of investments are waking up to their role in driving change, and the same can be said for industry regulations and standards.

“Not only do we need to pay attention to fairness in the factories for the people that are working there, but if we’re talking about fairness and social justice in the fiber and textile world — it also has to include the farm,” said La Rhea Pepper, managing director of Textile Exchange as well as a fifth-generation Texas cotton farmer, where her farm has been certified organic since 1991.

The noise now is more of a collective clatter. On Friday, The Investor Alliance for Human Rights — which counts Aberdeen Standard Investments, the firm that pulled funds from Boohoo Group — urged investors to carry out enhanced due diligence to ensure the brands and retailers they support are clean of human rights abuses.

An estimated 1.8 million Uyghur Muslims, and other Turkic groups are said to be forced into labor in cotton fields and textile factories in the Xingjiang region, an estimate which can be traced back to a report from anthropologist Dr. Adrian Zenz, who studied the region closely and based estimates upon leaked documents from last year.

“Even if it’s paid labor, in farming in general it’s the worst wages,” Pepper added. “When you talk about extreme poverty when you look at rural Africa or rural America or rural Brazil or whatever — it’s the farming communities that are absolutely the poorest that are picking your strawberries and your peaches and your apricots. It’s the people growing and producing the fiber and food that are some of the poorest and facing extreme poverty,” she reiterated.

The International Fund for Agricultural Development calls farm workers the “world’s most vulnerable people,” in its 2019 report with 79 percent of the poorest people are living in rural areas, mostly surviving on small-scale agricultural projects.

Since 2018, the U.S. federal government under the Trump administration has handed off tens of billions of dollars in taxpayer money to farmers to mitigate damage from the U.S.-China tariff wars as well as the coronavirus. But loopholes allow congressmen, billionaires and “large and complex farm organizations,” in the words of the Environmental Working Group, to reap the majority of the benefits.

“The bailout supported the failing infrastructure [of large-scale farms]. Are we putting the burden on the companies that it should be on?” commented Robyn O’Brien, cofounder of rePlant Capital and author of “The Unhealthy Truth,” who has dedicated 20 years to the intersection of food and finance.

Politics aside, O’Brien finds the more hotly contested issue now is rethinking farming in general since an estimated 70 percent of U.S. farmland will change hands in the next 20 years, according to the U.S. Department of Agriculture. While the focus is on rebuilding food systems, fiber systems are intrinsically linked.

Soil health is “one of the very few things that is non-partisan,” O’Brien added. “Soil wealth” is a concept gaining ground despite what he calls a “homogeneous profile” of investors. Last year there were 70 U.S. investment strategies targeting regenerative agriculture with assets totaling over $47.5 billion, as documented in a report from Delta Institute, among others.

Divestment from fossil fuels to solar and wind power was just the beginning for many investment funds. Taking anywhere from three to five years to convert a conventional farm to organic practices, O’Brien emphasized that “the three years doesn’t sync up with the quarterly earnings model.” With Wall Street “lacking the metrics and patience,” firms like hers focus on deploying such mission-aligned capital, or “transition finance,” to put toward “the daunting task of converting that farm [to organic].”

“To do it, you have to put the farmer at the center of it to ensure that their financial resiliency is at the center of this model,” added O’Brien. Her point is echoed in findings in a July report by The Institute for Multi-Stakeholder Initiative Integrity (MSI Integrity), which questioned the effectiveness of MSI’s in centering the rights of the worker and providing measurable transparency, among other criteria.

Are today’s farmers, and their hired help, protected these days?

Fair Trade USA represents thousands of certified products, including cotton, coffee, clothes and more, distributing some $740 million to farmers and workers since 1998. Pottery Barn, Madewell, J. Crew, Patagonia and Outerknown are a handful of the names that manufacture or source Fair Trade goods.

Fair Trade farmers, workers and fishermen have reported “reduced income” as the chief challenge during the pandemic. As a helping hand, Fair Trade USA deployed emergency relief funds to its certificate holders — those legally certified as the holding entity of the Fair Trade USA producer certificate.

While all committees reported these funds helpful in alleviating some pressures due to the pandemic, a majority of certificate holders still struggle with declining demand and delayed or canceled orders — with some reporting “no demand for product” since mid-April, as is the case across the categories in general whether Fair Trade or not.

With the former proving something of a safety net for stakeholders, what can be said of the plethora of textile standards in existence?

Earlier this week, experts from the Rodale Institute and brands like Dr. Bronner’s and Patagonia, as well as Textile Exchange, supported the launch of the Regenerative Organic Certified standard for food, fiber and personal-care products. Before being eligible for ROC, farms must first hold USDA organic certification.

The 2018-founded Regenerative Organic Alliance, which is behind the certification, exists to, as it says, “heal a broken system.”

By Pepper’s accounts, standards are “more important than ever.” Founded in 2002, Textile Exchange specializes in the sustainability of raw materials, driving collective action and industry accountability with its suite of standards, including the Organic Content Standard, Global Recycled Standard (reportedly its fastest-growing standard), and Responsible Wool Standard, among others.

In less than a year, membership doubled, from 210 to 425 members. As with others, Textile Exchange has seen a “split” between brand survivalists and sustainability enthusiasts due to COVID-19, with the latter ramping up their preferred fiber strategies, for one.

As per the report, a majority, or 86 percent of companies, had instilled a circularity strategy in 2019 and nearly 650,000 hectares of cotton farmland showed improved use.

Bluesign Technologies is another standard-setting body that has played a critical role in driving sustainability in the textile industry, giving its 650 partners digital “autonomy” and control over dye and chemical management, with now 99 percent of textiles able to be made Bluesign-certified today.

Jill Dumain, chief executive officer of Bluesign Technologies, stressed Bluesign’s role in education and equipping its partners. In the end, though, while Textile Exchange and Bluesign all deal with various stages of the production pipeline, everything must start with the farmer.

“It’s about paying a fair price to the farmers for the value of their crops,” Pepper said. “Where we focus is on education, education and more education.”

Leave It to the Social Experts 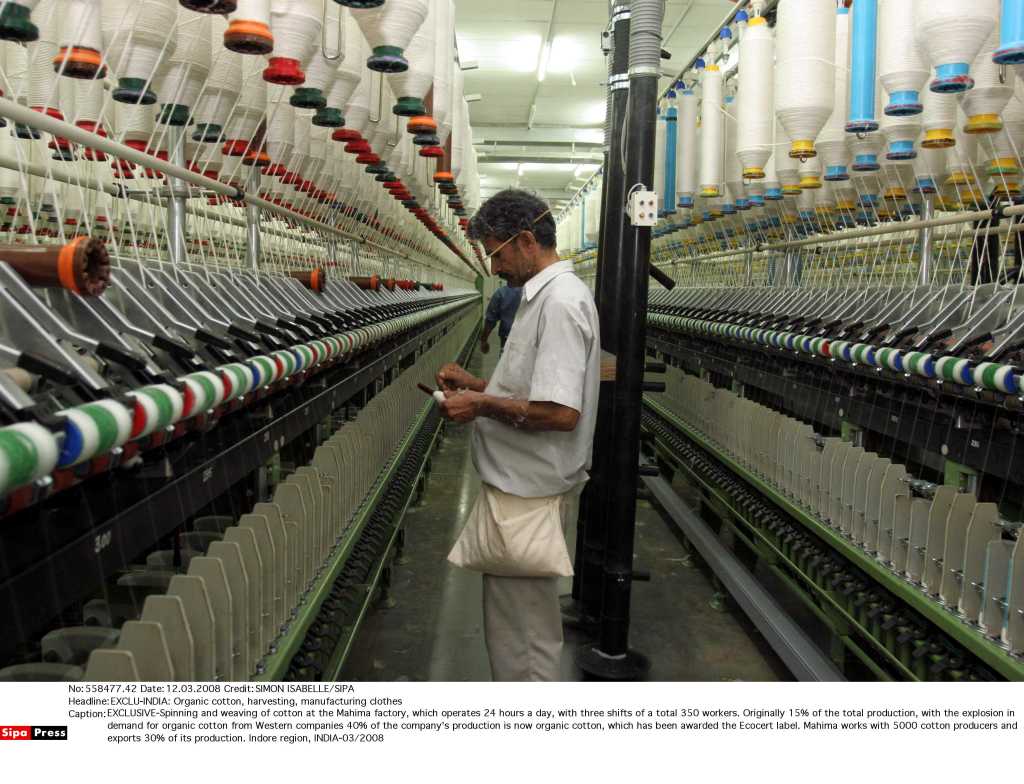 Spinning and weaving of cotton at the Mahima factory where 40 percent of the company’s production is now organic cotton.  SIPA

Most standard-setting bodies would appear to operate behind the scenes and focus on their strengths, leery of owning social responsibility to the extent that it’s punishable in headlines.

“We’re not social experts,” attests Pepper, but it’s why the organization is linking with groups such as the SAC or industry initiative Fashion Makes Change, spearheaded by founder and chairman Cara Smyth. “What we’re doing is encouraging that it’s got to be a multifaceted strategy. It’s got to have planet and people, and quite frankly — economic fairness,” Pepper stated.

At a sort of crossroads, certain practices like stating the “country/region of origin” of the raw material on transaction certificates are not mandatory but await a “required review and feedback period.” Too, a June allowance warrants certification bodies to take action should they witness unacceptable practices, but it is “currently treated as a recommendation and is not required to be audited against.”

Many other changes are in the works. This fall, Textile Exchange will roll out a Climate+ strategy alongside the SAC, with metrics on greenhouse gas reduction likely landing somewhere around 30 to 45 percent CO2 reduction targets.

“Bluesign doesn’t have that core competency around work time hours, overtime pay — we leave that to the social experts,” added Dumain.

With assessments every three years and regional resource hubs, Bluesign does play an active role in detecting violations, especially as brands come to understand cluelessness about subcontractors won’t cut it.

Dumain added how process-specific applications are granted to system partners but undocumented processes could pose a violation. “If we find violations, then we address them directly with the system partner. If they’re willing to change it, we continue on — if they don’t then we ask them to leave the system,” Dumain shared. On-site processes are documented in Bluesign’s IT system called “The Cube.”

Is trust mutual between partners, and are certified factories more protected in times of crisis?

“No, but what we’ve seen is the ones that are willing to take the journey and can make that effort — they’re usually better set up as a company. It’s just part of management systems, it’s part of their ability to be more resilient because they typically have a bit more sophisticated company that has looked at things more carefully. And that’s not to say there are others that are out there who have done the same things and are not Bluesign system partners but we tend to work with those that are forward-thinking and looking to the future and making this investment,” said Dumain.

Factory owners would affirm the same.

Naturally, farm management is out of its scope. “We draw a line there because there’s a lot of great groups that know a lot about pesticides and chemical use on the farms than we do,” said Dumain, who is personally knowledgeable about the subject with previous experience developing organic cotton at Patagonia in the Nineties.

Either of their practices is aligned with the national and international labor laws, including the International Labour Organization.

Dumain added: “It really goes back to our philosophy that if we were in a policing mode then that’s a different conversation than an education mode, and really our goal is to educate and equip our system partners to go out in a way that they can manage their business in a way that their customers are expecting them to whether it’s as a Bluesign system partner or just, in general, being a responsible manufacturer today.”

Are collective action and radical transparency relegated to myth, or is light starting to be seen at the end of the tunnel toward real systems change in the fashion, footwear and textile industries?

Pepper believes “it has to go there,” to radical transparency and what she calls “connected action,” while Dumain prefers the term “thoughtfully transparent,” having to bridge sensitive information between partners and the general public. O’Brien points to labeling legislation at the state level and technology as key to making transparency “readable to the consumer.”

On the status of certifications today, be it in food or fiber, O’Brien said: “All of them have helped serve important roles and helped educate,” but even those which are incredibly well-intended may lack execution and policy side, which is where she turns to a “cost-benefit analysis.”

And inevitably when mistakes occur on the brand side, “it’s owning it upfront and take that hit, upfront if it’s a hit. Otherwise, you wake up every morning and wonder if that next headline is going to be about you,” reiterated O’Brien.