Today’s column is written by Congressman George Miller of California, an apparel-producing state. 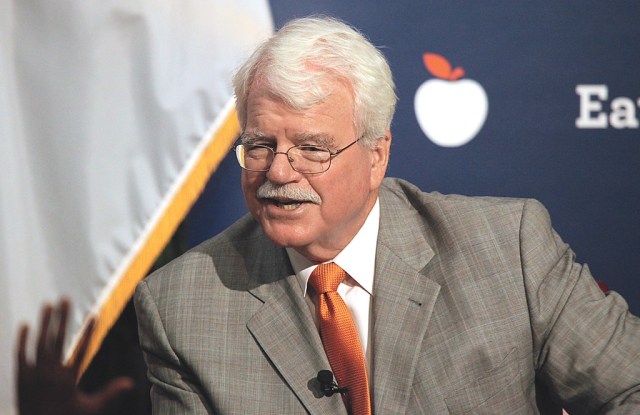 Editor’s Note: Think Tank is a periodic column written by industry leaders and other critical thinkers. Today’s column is written by Congressman George Miller of California, an apparel-producing state. He is the senior Democratic member of the House Committee on Education and the Workforce.

The death toll in Bangladesh’s garment industry is staggering, with 1,000 dead over the past several years. In the latest tragedy, an eight-story building that housed five garment factories collapsed, killing more than 500 so far, injuring more than 1,000 and leaving an unknown number of people trapped in the rubble of the Rana Plaza. And just five months earlier, a devastating fire at the Tazreen Fashions factory killed at least 112 garment workers.

These two tragedies are not isolated. Since Tazreen, at least 40 incidents causing death and injuries as the result of fires and explosions at garment factories have occurred. Undoubtedly more will follow unless the major fashion brands change their business models.

The majority of workers at these factories are young women and mothers trying to scrape out an existence working 12-hour shifts for pennies a garment. They produce clothing under contract for corporations we all know, like Wal-Mart, J.C. Penney, Mango, Benetton, H&M, The Children’s Place, GAP and Dress Barn. The core business model for the ready-made garment industry pits supplier against supplier, country against country, with the margin of difference often eked out in subsistence wages and needless disregard for safety.

I recognize that these brands give Bangladeshi workers something they may not otherwise have: a job and a paycheck. With so many desperate for work, it is no surprise that many risk their lives in sweatshop conditions.

Four million Bangladeshi workers in 5,000 factories provide clothing to American and European companies while earning among the lowest minimum wages in the world — about $37 a month. These wages are so low that they are drawing production away from China as part of a global race to the bottom and Bangladesh is fast becoming a leading global exporter of clothing.

The reason factory managers keep their workers in unsafe buildings on the verge of going up in flames or collapsing, is fear. Fear that the Western brands and retailers will take their orders elsewhere because of a missed day of production, late delivery or a minuscule increase in production costs. The brands know this. That’s why I believe they bear the ultimate responsibility for these horrendously unsafe working conditions.

I met with one of the Tazreen fire survivors when she visited Washington last month. She described the outrageous working conditions leading up to the fire, toiling in a factory with bars on the windows and no place to run if a fire broke out. She discussed how she had badly broken her leg jumping from the 3rd floor of the burning factory. As the fire began to rise through the building, she thought only of saving her body from getting burned so her family could recognize her in case of death. A number of her coworkers also jumped with her, but many did not survive the fall.

During our meeting, it became clear that it was only a matter of time before the next Tazreen would take place. Two weeks later, Rana Plaza collapsed.

It does not have to be this way. Brands have promoted their “ethical sourcing” programs as the answer. But these programs are not credible. They are tainted by a lack of independence and transparency. More importantly, these sourcing programs are not working. Factories are routinely given passing grades despite lives still being lost from fire or collapse.

American consumers and leaders in the fashion industry have a moral imperative to ensure that these tragedies do not happen again. The only way forward for the global brands to improve conditions and worker safety is an effective, enforceable and binding commitment.

That is why I have asked a number of retailers and brands to join together and sign the Bangladesh Fire and Building Safety Agreement, developed by nongovernmental organizations to prevent these types of disasters from occurring.

This agreement contains many of the most urgent elements necessary to tackle these dangers. It includes detailed public reporting of fire and building audits conducted by independent safety experts, a requirement for timely repairs and a requirement for brands to terminate a contract if a factory defies their obligations to keep workers safe. The agreement also provides a right for workers to refuse unsafe work without retribution and union access to factories, among other labor protections.

A number of international brands have signed into this agreement including PVH (Calvin Klein, Tommy Hilfiger, Van Heusen, IZOD, Arrow and GH Bass & Co.) and the German retailer Tchibo. It is now time for other major corporations like GAP and Wal-Mart to also enter into this enforceable agreement that will protect the lives of workers who produce the garments they sell.

Experts believe that this agreement will only cost ten cents a garment over five years to make needed safety upgrades at these factories. I appreciate that some who profit from the current system do not want enforceable agreements that change the rules of the game. But simply re-branding the failed social compliance audit programs will not work. And simply changing the conversation to put the onus on the Bangladeshi government instead of the brands won’t cut it either.

The major global brands now face a choice: They can attempt to weather the storm, leaving workers in continued danger, or they can take a different road — one that includes healthy profits without the human death toll by signing onto an enforceable safety agreement.

It is time that American consumers understand which brands will accept blood on their labels and which will not.

Representative George Miller is the senior Democratic member of the House Committee on Education and the Workforce. First elected in 1975, he has been an advocate on education, labor, the economy and the environment. He represents the newly created 11th District of California in the East Bay of San Francisco.