Rick Helfenbein, president of Luen Thai USA and vice chairman of the AAFA, weighs in on U.S. trade issues. 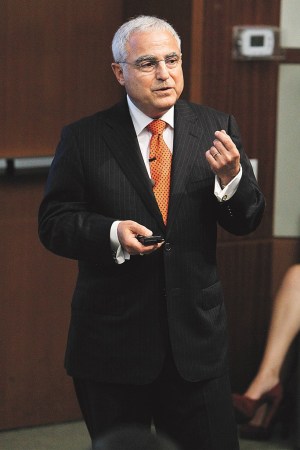 Editor’s Note: Think Tank is a periodic column written by industry leaders and other critical thinkers. Today’s column is written by Rick Helfenbein, president of Luen Thai USA and vice chairman of the AAFA.

Can you imagine an international boxing match where the rounds are endless, new contestants continue to emerge, and the referee describes the chaotic situation as a road map for the 21st Century?

If our projected USA trade policy is actually mapped out, it sure would be nice if someone could articulate where we are headed. Such is the script for our Tran-Pacific Partnership negotiations, which have become symptomatic of our government’s malaise when it comes to the very serious issue of international trade. For those who care deeply about this subject, quite frankly, if our Government was considered a trade-centric business then, most likely, we would soon be out of business. Where is the USA strategy? Who is in charge of our marketing?

Countries are making trade deals, knocking down barriers, opening up markets. The USA, on the other hand, is spinning in circles. We talk a good game, but we just don’t play one. The fear is that the final four will become the final three. The #1 rated team will soon get benched…not because we didn’t play well…simply because we didn’t play as a team, and our team lacked a long-term game plan.

Our country needs a robust trade policy, and trade is essential to the enhancement of the U.S. economy. It’s abundantly clear that over the last four years, trade policy for the USA has not been sparked with enthusiasm and enlightenment. Both the Obama Administration and the U.S. Congress have demonstrated time and again that talk about trade is rhetoric over substance.

The 111th and 112th Congresses rolled over what they could, enacted only what they had to and let any serious discussion of trade policy fade into oblivion. When a legitimate trade tool (like a duty suspension) is labeled as an earmark, then we know (for sure) that our international trade policy has completely ground to a halt, with little chance for success.

The White House took their stand on trade early in the first term.

On September 11, 2009, the Obama Administration placed a three-year, 35 percent tariff on low-price tires imported from China. This was a painful political protection that wasn’t even necessarily needed (or wanted) by the very people it was designed to help. Allowed under World Trade Organization rules, this was a restrictive action promoted by the United Steelworkers Union as a “job protection” effort. The administration failed to realize that low-cost tires were being used as a “merchandising tool” to balance the sale of high-price tires that were already being made in the United States.

The useless tire tax was in effect for a full three years, and the results were terrible. Production of the low-cost tires was simply relocated to other countries, and the punitive damages in the form of higher prices (as studied by the Peterson Institute) cost consumers about $1.1 billion in additional expense. At the same time, employment in the U.S. tire industry had a huge employment surge of only 1,200 workers, with an estimated cost of $900,000 for each job saved. How sad is this — choosing punishment over progress.

Simply look to recent efforts to renew and expand the Generalized System of Preferences (GSP), where Congress chose rollover instead of reform. Or, look to the extended delays in finally passing the long-awaited trade agreements with Colombia, Panama and South Korea. These delays raised doubts about the U.S. position on trade, as it relates to the global markets.

Rhetoric emanating from Washington would have us believe that we are creating a trade policy that is forward thinking in nature. However, we remain puzzled about the administration’s efforts to live up to its commitments. For example, when questioned about the 2014 expiration of the Nicaragua tariff preference level (TPL), the Office of the United States Trade Representative has argued that this valuable TPL has “outlived its usefulness.” Those of us who study these trade happenings are trying to better understand how a trade allowance that balances a manufacturing process and utilizes U.S. fabric in a Central American country can “outlive its usefulness,” especially when there is a need (exactly like what happened with the tire case) to balance the utilization of higher price fabric with lower price fabric.

The good news is that our Apparel, Textile and Footwear industries have not given up hope. We are optimistic that President Obama and Congress will find new trade energy in this second term. We would like to see fewer words, fewer meetings (TPP is in round 17), and more action on substantive trade issues.

As an industry that relies on global trade, we know all too well that trade means jobs. Trade offers us the ability to satisfy customer demand and helps to grow our economy. We are now in the early stages of the 113th Congress, and the Obama Administration has been talking trade to all who will listen. Let’s hope that this new administration starts to create its trade legacy. Let’s hope they will take our trade issues seriously, because the four million U.S. workers who engage in the apparel and footwear industry, and the millions of hardworking American families who buy our goods, depend on it. At the end of the day, perhaps a new version of the old adage is true: If wishes were horses, then trade bills would ride.

Rick Helfenbein is president of Luen Thai USA, a division of Luen Thai Holdings Ltd., the largest publicly traded apparel supply chain services company on the Hong Kong Stock Exchange. He was recently elected vice chairman of the American Apparel & Footwear Association and has been involved with the Clinton Global Initiative efforts for relief aid and job creation in Haiti, and has worked to help create the SAVE Act, which would develop a trade preference agreement between the U.S. and The Philippines. Helfenbein annually participates in COER, which is the Consortium for Operational Excellence in Retailing at the Wharton School of Business and Harvard University.