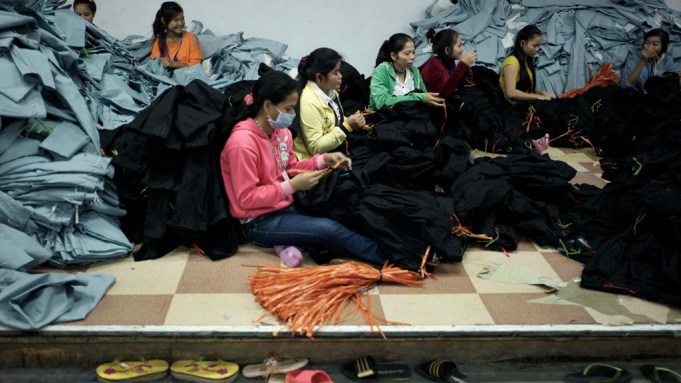 Phnom Penh, Cambodia — About 15 garment workers were seated cross-legged in a circle on a rattan mat outside SL Garment Processing Factory in the Meanchey District here last month. They were quietly manning a roadblock their union had set up in a protest at the factory in early August.

The peaceful scene was a far cry from the one a week earlier when, on Nov. 12, the workers attempted to march to Cambodian Prime Minister Hun Sen’s house to seek a resolution to the three-month-long dispute with SL Garment. The march erupted into violence when security forces pushed back against the workers and other youths, who pelted the police with rocks. The police returned fire with tear gas and live ammunition, leaving a street food vendor dead.

While industry insiders say the Nov. 12 violence is atypical of Cambodia’s frequent factory protests, the SL workers’ demands are echoed across the country’s growing $4 billion industry as the sector experiences more strikes and protests than ever before.

Garment workers across Cambodia are calling for an increase to the country’s mandated minimum wage of $80 a month, more benefits and the right to unionize and for their factory’s union leaders to advocate for them. The unrest in the Cambodian apparel industry comes as another major clothing manufacturing nation — Bangladesh — faces its own worker unrest over similar issues, plus growing pressure from Western retailers and brands to improve worker safety and working conditions.

Data compiled by the Garment Manufacturers Association in Cambodia, or GMAC, on the industry show that 2013 has brought longer and more sustained strikes, culminating in a loss of almost 450,000 man days during 81 strikes in the first seven months.

This turbulence is not reflected in the Ministry of Commerce’s data for garment exports, which usually make up more than 80 percent of Cambodia’s gross domestic product. Exports have already hit an all-time high of $4.1 billion for the first nine months of this year, a 22 percent increase compared to the $3.44 billion during the same period in 2012.

Eager to end the SL strike after the Nov. 12 incident, the Ministry of Labor said the company would be willing to take back all 3,000 protesting workers, including the 19 union leaders, and pay them 50 percent of their wages lost during the three months.

SL Garment is one of the biggest manufacturing and laundry facilities in Cambodia and at peak operation was a producer of clothing for Gap, H&M and Levi Strauss, among many other international brands. For the management, the three-month-long strike has already resulted in losses of $15 million.

Gap and H&M have been closely following the dispute, and have repeatedly urged both sides to come to a resolution.

“We are very concerned with the protests and violence in Cambodia. We urge all parties to return to the negotiating table,” said Laura Wilkinson, a spokeswoman for Gap Inc., in an e-mail Nov. 22. “We understand the Cambodian government recently issued an order to bring about an end to the strike this week and we are hopeful that the order will lead to a peaceful and equitable resolution soon.”

For its part, Levi Strauss & Co. said that it remains committed to sourcing from Cambodia despite the recent violence and the ongoing strikes in the industry. The company has since requested that SL Garment stop all production of its clothing and transfer it to other suppliers’ factories.

Joseph Kee Leung Lee, a consultant for SL Garment, said on Nov. 22 that the factory is the victim of illegal wildcat strikes over an unreasonable demand: The workers are calling for the removal of a factory shareholder, Meas Sotha, whom they allege is threatening their freedom of association by bringing in armed military police officers to act as the factory’s security guards.

Repeatedly denying this claim, Lee said it is impossible for the company to remove one of its shareholders unless Sotha chooses to sell his shares.

“You cannot remove your shareholder unless he is doing something that is illegal to the company,” Lee said, adding, “He’s just a very good teacher. He teaches the workers what is good and what is wrong.”

Other demands from the workers include a minimum wage increase to $150 a month from the government-mandated $80 and more meal money for each work shift. But good faith negotiations between the two sides have been hindered by accusations of violence and damages incurred during the three-month strike.

Lee alleged that on Sept. 20, workers belonging to the factory’s Coalition of Cambodian Apparel Workers Democratic Union, or CCAWDU, which has been leading the protest, stormed the grounds of SL and smashed up cars, motorcycles and office equipment. The damages cost the factory $24,000, and a lawsuit was filed against the factory’s 19 union leaders.

Camped daily outside the factory’s grounds under a blue tarp shade and blocking Road 371, Ouch Noeun, one of the 19 union representatives, said the workers’ demand for Sotha’s removal is non-negotiable. Painting a very different picture than the one factory management described, Noeun said Sotha’s arrival heralded the presence of armed military police officers on the factory’s premises.

“He is a dictator. When he started working here, he never spoke to any workers and just did whatever he wanted,” Noeun said. “The workers are worried about the police and military police that he brought into the factory. I can say that he does not respect human rights.”

Sotha, whose fingers boast a ring with an enormous diamond, denied bringing the military police officers into the factory, and said their presence was actually ordered by SL’s owner after the Sept. 20 vandalism.

“The workers are not in the wrong [for protesting] and the factory is not doing wrong either. But I can say that the 19 union leaders are in the wrong,” he said, referring to the Sept. 20 incident.

While SL had initially pushed back against reinstating the 19 union leaders back to work pending the court complaint, SL owner Wong Hon Ming confirmed that the factory had agreed to accept them but declined to give a reason.

“We have already agreed to accept them back,” Wong said.

Unionist director Ath Thorn denied all the accusations of damages against his members.

“We have tried to explain to the company about what the problem is and that we cannot negotiate without having the 19 people come back to work,” Thorn said. He believes that pressure from the government and international brands led to a change of heart.

Contacted more recently on Friday, Thorn said the majority of the protesting workers had returned to work, including the 19 embattled union leaders, following an agreement with SL management on December 4.

While about 3,000 workers have continued the strike — taking out loans from family members and local banks to survive — about 2,000 have returned to work in the factory’s laundry facilities.

Khim Hong, 26, who currently works for SL’s quality assurance section, said the military police were already in the factory in August. Like the protesting workers outside, she agreed that Sotha’s presence fosters a threatening environment.

“[The police] had guns. I was worried during that time because I was afraid something violent would happen in the factory,” she said, adding that she joined the strike for a few weeks before returning to work.

“I have no choice. If I still continue to protest, I won’t have money to pay for rent and food,” Hong said. “But I am very unhappy to be here.”

After working overtime daily, the average take-home wage for workers at SL Garment is $120 a month. The government’s mandated minimum wage of $80 a month is an increase implemented in May from $61. Unions and labor activists have consistently said that $150 is an appropriate minimum wage for a worker in Phnom Penh, where the cost of living and food has steadily increased each year and wages have not kept up apace.

A Ministry of Labor official said that they are trying to work out how large a raise they can implement without affecting investors.

“The working group is now still studying how much to raise the wage for the workers but the policy of the government is to raise it in January 2014,” said Prak Chanthoeun, director-general of the ministry’s dissolution department.

Dave Welsh, Cambodia’s country director for Solidarity Center, a labor rights organization affiliated with the AFL-CIO, said wages and freedom of association have repeatedly cropped up in all labor disputes, and it is something that the industry stakeholders must take more seriously.

“The issues at the heart of the SL strike are probably going to be at the heart of a lot of disputes this year unless the government addresses the issue of wage and independent unions being able to function,” Welsh said. “The industry continues to boom and yet the workers are getting very little in return.”

Calling the SL strike a case of “hooliganism,” Ken Loo, secretary-general of GMAC — which represents the country’s exporting factories — said protesters from other factories are taking CCAWDU’s cue to demand the removal of any factory administrator that they dislike.

“It is never the prerogative of workers and unions to ask for the removal of any individual; that’s management’s prerogative,” Loo said. “As the strike gets more and more prolonged, other unions are catching on to this and they assume that the government is allowing this, and you see that in the four or five strikes in the last month that this request exists.