On key issues for the fashion industry, so far the candidates seem to be pretty much alike — and not that far apart from President Obama. 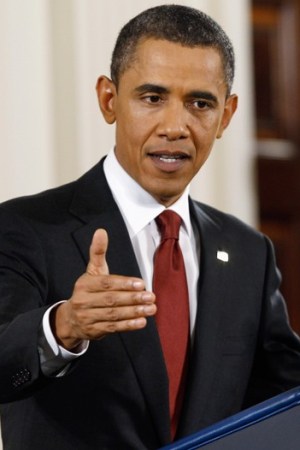 WASHINGTON — The same, but different.

That’s the consensus forming about the policies of the Republican candidates vying for the presidency in 2012, who, on key issues for the fashion industry, so far seem to be pretty much alike — and not that far apart from President Obama. On topics such as taxation, labor-management issues and health care, however, the candidates strongly disagree with Obama.

Former Massachusetts Gov. Mitt Romney and Rep. Michele Bachmann (R., Minn.), who heads the Tea Party Caucus in the House, are the early frontrunners on the GOP side. The two candidates scored a virtual tie in an Iowa Poll released June 25. Romney was in first place among Iowa caucus-goers with 23 percent support, while Bachmann had 22 percent.

The candidates’ positions on international trade policy will be measured by the industry against Obama’s trade record.

“I think they are all basically in the same place on trade,” said Phillip Swagel, professor of international economic policy at the University of Maryland and a former Treasury Department official, referring to the GOP candidates and Obama. “They favor moving forward on the three free trade agreements and they all recognize trade is fundamentally good for the U.S. economy. They want free trade, but they also argue that everybody has to follow the rules and there should be penalties for countries that don’t.”

But there are differences in their positions on trade. For example, Romney and Bachmann both opposed Obama’s imposition of retaliatory tariffs on Chinese tire imports, according to Romney’s recent book and an interview with Bachmann that aired on Fox News. Although they talk tough on going after countries that violate trade rules, their positions on those two cases suggest there might be exceptions when the threat of a trade war looms.

By contrast, Obama has filed a handful of World Trade Organization cases against China for unfair trade practices in various industrial sectors and he also filed the first labor case against Guatemala under the Central American Free Trade Agreement.

Another divergent area on trade is on Trade Adjustment Assistance, a program that provides federal aid to U.S. workers when they lose their jobs because of import competition. Obama has made renewal this year of the TAA program a linchpin to advancing three free trade agreements with Panama, South Korea and Colombia, which have languished for four years. Opposition from House and Senate Republicans to the TAA program, which they argue is costly and will add to the ballooning debt, has once again stalled the trade agenda.

Bachmann’s position on TAA differs vastly from Obama’s and would not sit well with labor groups. She opposed renewal of TAA in 2007, according to The Club for Growth, a conservative advocacy group, which has done an analysis of the GOP candidates’ positions on a range of issues.

Romney, in recent news reports, said he favors a program to help displaced workers, but his comments were not linked to the current political stalemate between TAA and the three free trade deals.

While the GOP candidates are likely to go after Obama for being soft on China’s undervalued currency, Bachmann voted against a China currency bill in the House last year and she was a minority in her own party, as evidenced by the 348 to 79 vote, which passed the bill in the House.

“Both of them are more in the free trade camp than Obama, that’s for sure,” said Gary Hufbauer, senior fellow at The Peterson Institute for Economics. “But it would seem that Bachmann is considerably less disposed to criticize China than Romney. She might have genuine difficulty in taking a strong line against China and that might be a big difference between her and Romney.”

Kevin Burke, president and chief executive officer of the American Apparel & Footwear Association, said Romney has “talked a good story on trade,” although he does not have a congressional voting record on which he can be judged.

Burke said Bachmann is still an unknown to the industry, while Gingrich is a tried-and-true free trader and Santorum has “come around a bit” to a free trade policy, supporting CAFTA in 2005 after opposing the North American Free Trade Agreement in 1994.

“Intellectually, I believe [Obama] is a free trader,” Burke said. “Practically, he has come along, but I think he still has his foot on the brake.”

A lesser-known GOP candidate, Huntsman, has drawn some interest from apparel importers and brands, according to Julia Hughes, president of the U.S. Association of Importers of Textiles & Apparel.

“A lot of people have positive views of Huntsman, from working with him when he was at USTR,” she said, referring to his post as deputy U.S. Trade Representative for former President George W. Bush. “He is the most known [candidate] among apparel retailers and brands, and he has been on the inside of trade negotiations. He heard from the industry and I don’t think he would view it as one of the top things he was most focused on, but he was aware of the importance of this sector.”

Health care — where Romney and Bachmann have called for a repeal of Obama’s reform plan; taxes, and labor-management issues are all also important to the industry.

Both Romney and Bachmann have supported cutting taxes across the board, reducing the corporate tax rate and making the Bush-era tax cuts for upper income earners permanent.

“They both use the general mantra of cutting taxes to create jobs and getting the government out of it,” said David Redlawsk, a political science professor and director of the Eagleton Center for Public Interest Polling at Rutgers University.

Obama has repeatedly advocated ending the tax cuts for the rich, although he has not successfully worked with Congress, to date, to end them. Taxes are one of the issues creating a stumbling block in the ongoing negotiations between Obama and Republican House leaders about raising the U.S. debt ceiling.

On labor-management issues, Obama has rankled the business community with several decisions, including new regulations and support for the Employee Free Choice Act, which would have boosted unionizing efforts, although that effort failed in Congress.

Romney recently blasted Obama for his support of EFCA and a new National Labor Relations Board lawsuit against Boeing for moving a plant to South Carolina, a right-to-work state, charging it moved to a non-union state to punish unions for work stoppages at a Boeing plant in Washington state.

“It’s not like this one case [Boeing] is going to swing the election but [the government intervention] seems so outside of the normal bounds of what Americans expect the government to do, that inevitably it will raise questions about the administration’s approach to economic policy and people will ask ‘do we really want a government that tells companies where to set up factories?’” said Maryland’s Swagel.

“The reality is, Obama is clearly not some kind of left-wing, fire-breathing union radical,” said Redlawsk of Rutgers. “In fact, that is why some of his base is pretty unhappy. This NLRB thing is really interesting because it clearly pushes things in a much more pro-labor direction for him than we’ve otherwise seen.”