First there was Obamacare, now there’s Obamatrade. President Obama is engaged in a high-stakes political battle over an Asia-Pacific trade deal that would have a major impact on the fashion and retail industries by tearing down barriers to billions of dollars in global trade. First, though, Obama has to get through a hornets’ swarm of opponents who want to change or kill the deal before it’s even born.

The Trans-Pacific Partnership trade negotiations between the U.S. and 11 other countries promises to bring together nearly 40 percent of the world’s gross domestic product under one free trade zone. In 2013, the U.S. exported more than $622.5 billion of manufactured products to the TPP countries, which include Japan, Mexico, Canada, Australia, Vietnam, New Zealand, Malay- sia, Peru, Singapore, Chile and Brunei.

“The fastest-growing markets, the most populous markets are going to be in Asia,” Obama recently said in making the pitch for TPP. “And if we do not help to shape the rules so that our businesses and our workers can compete in those markets, then China will set up rules that advantage Chinese workers and Chinese businesses. That will set the stage over the next 20 to 30 years for us being locked out, us being unable to protect our businesses from discrimination, our agricultural products being excluded from these areas, high tariffs that prevent us from being able to compete fairly.”

Business groups, including those in the fashion industry, have lined up solidly in support of TPP. But the path to TPP hinges directly on passage of another trade measure — presidential Trade Promotion Authority — which is to be taken up by Congress this week. TPA has also divided Democrats and will likely be an uphill battle. Under TPA, Congress sets negotiating objectives for the executive branch but can only vote for or against a trade deal and cannot amend it.

“TPP doesn’t happen if TPA doesn’t happen,” said David French, senior vice president for government relations at the National Retail Federation. “I can’t envision an outcome where TPA is not passed…but I think it will be hard to get it through Congress. This is the most challenging environment I have ever seen and I have worked every trade deal going back to NAFTA.”

Matthew Shay, president and chief executive officer of the National Retail Federation, inked an op-ed piece on Foxnews.com on Monday urging passage of the trade deal. “For the retail industry, trade agreements are important because they lower costs for American families and businesses alike and open new investment opportunities for retailers at home and abroad,” Shay wrote. “Family-friendly trade agreements have the potential to reduce or eliminate high taxes now applied to U.S. imports of many consumer goods like food, clothing and shoes.

“Tariffs collected on consumer goods from countries in two pending trade agreements alone — the Trans-Pacific Partnership and the Transatlantic Trade and Investment Partnership [between the U.S. and European Union] — reached nearly $6 billion in 2013, and hidden taxes on many products reach 30 percent or higher,” Shay added. “Imagine the savings for U.S. consumers if we are able to negotiate these tariffs down.”

Aside from lowering barriers, the deal promises to bolster manufacturing — at least that’s what some global vendors are saying. Nike Inc.’s president and ceo Mark Parker endorsed TPP on Friday at the company’s headquarters in Beaverton, Ore. He was joined by Obama, who made his strongest pitch yet for the trade pact.

Parker pledged that if TPP is enacted, Nike will create an “advanced footwear manufacturing center” in the U.S. that will create 10,000 manufacturing and engineering jobs and up to 40,000 indirect supply chain and services jobs over the next decade.

While companies such as Nike are lining up to publicly support TPP, opposition to the trade pact has reached a fever pitch in Washington. Obama is facing criticism from the liberal wing of his own party as well as labor and environmental allies, which has exposed a deep rift and rancor in his caucus at a time when he needs unity to push the trade pact through Congress.

Liberals like Sens. Elizabeth Warren (D., Mass.) and Sherrod Brown (D., Ohio) have led the opposition, accusing the administration of negotiating TPP under a cloud of secrecy and keeping the classified document out of the public’s hands and potentially undermining the sovereignty of the U.S. with new provisions.

A large swath of Democrats in the House, led by Rep. Sander Levin (D., Mich.), is also building opposition to TPP, listing a litany of concerns, ranging from labor and environmental provisions to countries that undervalue their currencies to gain a trade advantage. Then there are conservative antitrade Republicans, particularly those in the House, who may not want to give Obama the authority to negotiate trade deals or the credit for completing one.
AFL-CIO president Richard Trumka said in an op-ed piece in The Washington Post Sunday that Vietnam, Mexico, Brunei and Malaysia — all involved in the TPP negotiations — “are notorious labor and human rights violators” that do not comply with high-level standards said to be part of TPP. “This raises serious doubts about whether the TPP will create a level playing field for workers,” Trumka charged.

Obama has repeatedly addressed his critics and challenged their assertions. “For those who argue that somehow this is contrary to the interests of working families, what I tell them is my whole presidency has been about helping working families and lifting up wages, and giving workers more opportunity,” Obama said. “And if I didn’t think this deal was doing it, I wouldn’t do it. I didn’t get elected because of the sponsorship of the Business Roundtable or the Chamber of Commerce. Those aren’t the ones who ‘brung me to the dance.’”

At Nike headquarters on Friday, Obama called his critics “wrong” on trade, arguing that TPP is a “different kind of trade deal” from those in the past and will not lead to more outsourcing and job losses.

“I’ve spent six-and-a-half years trying to rescue this economy — six and a half years of trying to revitalize American manufacturing, including rescuing an American auto industry that was on its back and is now fully recovered,” he said. “So I would not risk any of that if I thought the trade deals were going to undermine it. The reason I’m for this is because I think it will enhance it and advance it.”

Beyond the political sniping is the negotiation itself, which has stretched for longer than five years. The trade chiefs and teams for each coun- try have difficult issues to resolve.

French predicts it will take “at least” the rest of the year to get TPP through Congress.

This sentiment was echoed by Hun Quach, vice president for international trade at the Retail Industry Leaders Association. “I don’t think negotiations are going to get derailed by public opinion,” she said.

“I think the prospects for TPP are pretty good,” said Joshua Meltzer, a fellow in global economy and development at the Brookings Institution. “There have been outstanding difficult issues which will certainly require a high level of political engagement but I don’t see any reason why there are any insurmountable obstacles to conclude the agreement.”

He noted that there is only so much opposition from members in his own party that the president can overcome. “I think he has accepted that these bills are going to have to go through on mostly Republican support and that a lot of Democrats are going to vote against them,” Meltzer said. “I think he knows that it is going to be difficult politically for some of his members and that there is going to be a lot of disagreement in his party but…I think he also sees overall outcome as being good for the country….I don’t think [the opposition] will derail it.”

In order to get there, however, Obama and TPP supporters will have to overcome significant opposition from the likes of the AFL-CIO. Celeste Drake, trade and globalization policy specialist at the AFL-CIO, said the union’s goal is to stop TPA, or “fast track,” in its current form to force the administration’s hand on changing provisions in TPP.

Drake said the AFl-CIO has said from the beginning that TPP could be “worthwhile” with the right protections and provisions. “We need more than promises on labor and the environment,” Drake said. “This is a trade agreement that is going to affect the whole country so as Sen. Warren said, let the American public see the text at a time when it matters.”

The fashion industry has a big stake in the TPP negotiations. Vietnam is the second largest apparel supplier to the U.S. and could gain significantly if a deal is finalized. For the year ending February, imports of apparel, textiles and footwear to the U.S. from all TPP countries grew 24.6 percent to $22.1 billion, according to a table compiled by International Development Systems. Combined U.S. exports to the TPP countries were $14.25 billion. 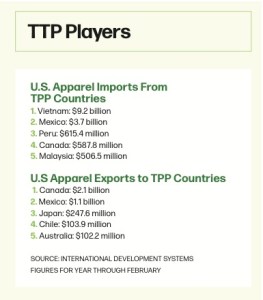